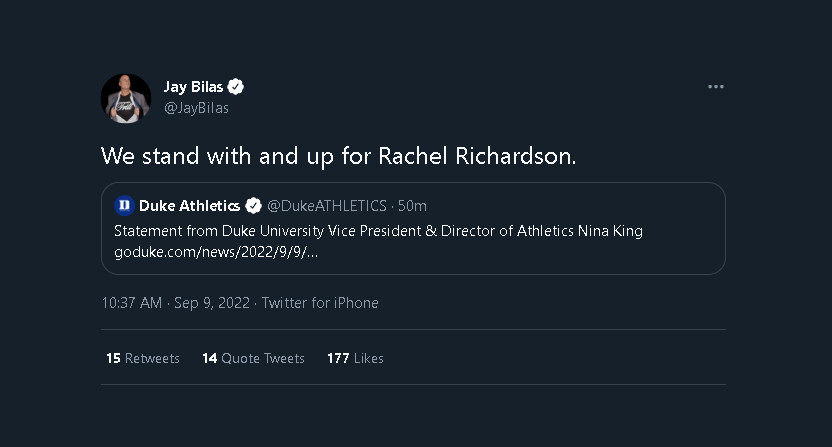 One of the most-discussed stories in college sports over the last while is what happened around Duke Blue Devils women’s volleyball player Rachel Richardson at an Aug. 26 match between the Blue Devils and the BYU Cougars at BYU’s gym in Provo, Utah. Richardson said she heard racial slurs and abuse from a fan during that game, which led to BYU banning the fan and moving the next night’s match to a different location.

But on Friday, BYU put out a statement saying their investigation found no racial abuse and they were reversing the fan’s ban. Duke then followed with a statement of their own that they “unequivocally stand with and champion” their players. And ESPN analyst (and Duke alum, and former Blue Devils’ player and assistant coach) Jay Bilas then retweeted that with further specific support for Richardson:

A statement from BYU Athletics regarding the investigation of the Aug. 26 volleyball match, examining our fan behavior and response.https://t.co/Vj3HlW6xzV

We stand with and up for Rachel Richardson. https://t.co/swnFWYe8zW

How did we get here? This started with a Twitter post the day after the match from Fort Worth, Texas attorney Lesa Pamplin saying that a fan had repeatedly hurled racial slurs towards Richardson, her goddaughter, who Pamplin identified as the only Black starter on the Duke team. It spread to Richardson herself speaking out on this, including on ABC’s Good Morning America. It also led to South Carolina cancelling a planned women’s basketball series against BYU. But there’s been criticism against that, and questioning of Richardson’s claims (and of media coverage of them), especially after BYU campus police said they couldn’t corroborate the slurs. And the Cougars’ announcement Friday that they are reversing the ban on this fan will undoubtedly amp the discussion here up further. Here’s more from that announcement:

As part of our commitment to take any claims of racism seriously, BYU has completed its investigation into the allegation that racial heckling and slurs took place at the Duke vs. BYU women’s volleyball match on August 26. We reviewed all available video and audio recordings, including security footage and raw footage from all camera angles taken by BYUtv of the match, with broadcasting audio removed (to ensure that the noise from the stands could be heard more clearly). We also reached out to more than 50 individuals who attended the event: Duke athletic department personnel and student-athletes, BYU athletic department personnel and student-athletes, event security and management and fans who were in the arena that evening, including many of the fans in the on-court student section.

From our extensive review, we have not found any evidence to corroborate the allegation that fans engaged in racial heckling or uttered racial slurs at the event. As we stated earlier, we would not tolerate any conduct that would make a student-athlete feel unsafe. That is the reason for our immediate response and our thorough investigation.

As a result of our investigation, we have lifted the ban on the fan who was identified as having uttered racial slurs during the match. We have not found any evidence that that individual engaged in such an activity. BYU sincerely apologizes to that fan for any hardship the ban has caused.

…There will be some who assume we are being selective in our review. To the contrary, we have tried to be as thorough as possible in our investigation, and we renew our invitation for anyone with evidence contrary to our findings to come forward and share it.

Here’s the Duke statement on this:

“The 18 members of the Duke University volleyball team are exceptionally strong women who represent themselves, their families, and Duke University with the utmost integrity. We unequivocally stand with and champion them, especially when their character is called into question. Duke Athletics believes in respect, equality and inclusiveness, and we do not tolerate hate and bias.” #HateWontLiveHere

So there’s a clear divide there. And it will be interesting to see what comes of this. The situation has already led to a ton of debate, in sports circles and beyond. And it’s likely to now produce even more. But it’s certainly notable to see Bilas, one of college sports’ most prominent voices, weighing in in support of Richardson.