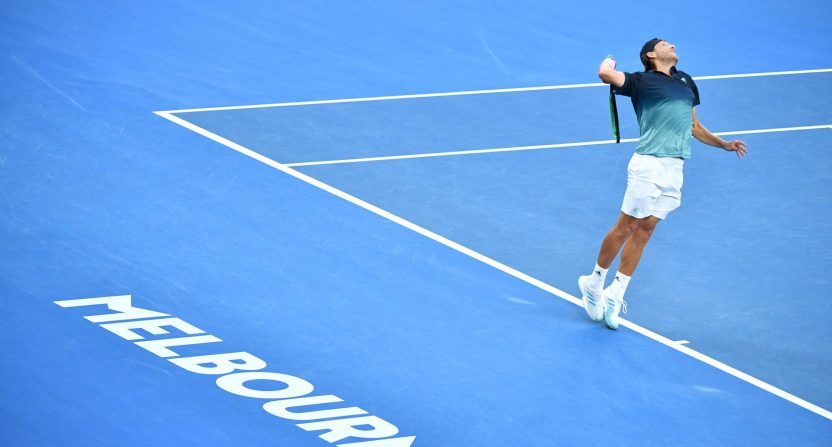 The devastating bushfires across Australia have killed more than two dozen people and an estimated 1 billion animals, and the total environmental impact can’t possibly be known yet. In the face of that kind of real life emergency, sports seems a bit secondary, but the Australian Open is set to begin on Sunday in Melbourne.

Air quality has already been a concern, with one player forced to withdraw from a qualifying match, and other players justifiably complaining that the matches were held outdoors to begin with.

Sorry – did I play in a higher intensity version of this yesterday without being medically informed? https://t.co/3ubY5R9uKf pic.twitter.com/oXCkbolNFe

ESPN is planning their annual “first ball to last ball” coverage across ESPN, ESPN2, and ESPN+, but obviously any tournament interruption could impact those plans. The main factor: which way the wind is blowing. ESPN VP Jaime Reynolds wrote a piece detailing how different the air quality is when the wind is from the west, best illustrated by the pictures he included.

"Australians want to showcase their strength and resolve. That's why we're all hoping for nothing but breezes from the west."

Reynolds notes that if the Open has to use a fallback plan to move some matches to indoor practice courts, it could mean ESPN’s unable to fulfill the “every match shown” promise of their coverage.

For the first two days of qualifying, they delayed the start. If need be, there are eight indoor practice courts that could be utilized. Unfortunately, there’s no television capability there, which would impact our plans to present every match of qualifying and the tournament.

While recognized as an outdoor event, this is the only Grand Slam venue that has three stadiums with a retractable roof, so they can accommodate play if conditions were to become difficult during the Main Draw.

ESPN.com’s FAQ for the event included this section on that fallback plan, as well:

It sounds far-fetched, but in a worst-case scenario, the Australian Open could become the first hybrid outdoor-indoor tournament. That’s because the National Tennis Center has four roofed stadiums as well as eight indoor courts. The air circulation systems in the roofed venues includes some filtration, but earlier this month in Sydney the smoke overwhelmed some air-conditioning units and triggered smoke alarms indoors in some buildings. Tiley said, “[We have] effectively weatherproofed the Australian Open.”

We may yet see whether that also means they have smokeproofed it.

Early returns on that fallback plan aren’t great, though, according to players on site. From the Telegraph:

The eight indoor courts in the National Tennis Centre at the south-east corner of the site have been seen as a potential escape route in the case of consistently polluted conditions. But when Great Britain’s Jay Clarke tried to warm up for his match in the NTC, he found the courts unusable after smoke found its way in through the ventilation system.

“There was talk of it [the qualifying matches] moving indoors,” said Clarke, who later suffered a hip injury and lost in three sets. “But we actually went over to the NTC and it was worse. They have got permanent vents open so when it [the smoke] got in it wasn’t able to get out. No players were practising indoors over there, and I ended up warming up outdoors.”

Whether a similar fate could happen to the retractable roof stadiums remains to be seen, but it’s certainly a concern. Player safety should be the guiding principle, of course, but that hasn’t always been the case, especially at the Australian Open, where matches have been staged in dangerous heat conditions in the past. That’s something that c at least be prepared for, though. Smoke-filled air is inescapable.

For reasons far greater than just the ability of the Australian Open to run on schedule, let’s hope the fires die down quickly.