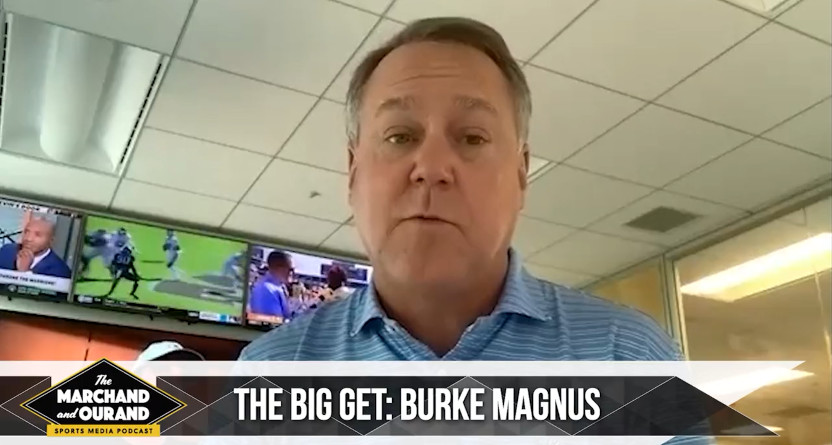 Beginning in 2023 and running through 2029-30, ESPN will no longer have Big Ten rights following the conference’s $1.1 billion rights deals with Fox, CBS, and NBC. That’s quite a change, as ABC had carried Big Ten games as far back as 1966, and ESPN had done the same beginning in 1979 (beginning in 1982 for football). ESPN was reportedly offered a package that would have seen them paying $380 million per year, but that only covered primetime football games (where they already have SEC and ACC rights), and only would have been for about 13 games a year (less than half of their current 27-game package, which they were paying around $190 million a year for). They turned that down, and ESPN president (programming and original content) Burke Magnus spoke to John Ourand of Sports Business Journal and Andrew Marchand of The New York Post about that this week on their Marchand and Ourand Podcast:

ESPN's Burke Magnus on the lack of a Big Ten deal.

Magnus’ comments in that clip, from the latest episode of that podcast, are transcribed in full below:

“What we needed to get, at the price that we needed to get it, neither of those things was available to us. As difficult as it was for us to go separate directions, it was the right decision for our company, there’s no doubt about that. We’re going to continue to be invested heavily in college sports. Nothing is forever in the rights-buying business, so you’ve got to be somewhat dispassionate about it and stick to your process, if you will. But it was hard, it was a hard decision. But I think it was the right decision for us, mostly because of what was available, what was on offer to us to buy, which is not what we were hoping for.”

The last line there is perhaps particularly notable, and it illustrates something significant about how this round of Big Ten bidding went down. Ourand reported that Fox would continue as the conference’s main media partner as early as April, which makes sense considering their majority control of the Big Ten Network (which has its own package of rights that runs through 2031-32) and their past focus on the conference. And in that report, Ourand wrote that Mark Silverman (Fox Sports president and COO) and Larry Jones (Fox Sports executive vice president of business) were assisting Big Ten commissioner Kevin Warren in picking who else would get rights.

That means those Fox figures likely played a role in the division of rights across different partners and the decision to split what ESPN had had into two packages (which wound up going to CBS and NBC). And they may also have been involved in the decision to only offer ESPN the primetime package (which NBC wound up with). It’s interesting that ESPN wasn’t even offered a package comparable to what they had had, regardless of price. And that adds to the larger discussion here about the growing college football rivalry between ESPN and Fox, seen in everything from pregame shows to scheduling to possibly even realignment. However, it’s unclear if missing out on the Big Ten will actually be all that bad for ESPN given the price that was being asked. As AA’s Joe Lucia wrote recently, some of that depends on what happens elsewhere:

In reality, it’s unclear how the Big Ten’s new media rights deals with affect the Big 12, Pac-12, and ESPN. For ESPN, it’s not a *good* thing that the company lost the Big Ten’s rights. That’s a lot of inventory out the window, and plenty of eyeball-drawing schools that won’t be on ESPN’s networks with any sort of regularity anymore. But what if ESPN takes the cash it could have given the Big Ten and retains the Big 12 and Pac-12, perhaps in an even larger package than the company currently owns? That would certainly fill the inventory holes, thought the popularity gap wouldn’t be closed.

If ESPN were able to minimize, or even eliminate, Fox’s interests in the Pac-12 and Big 12, they’d have a much stronger overall schedule, even without the Big Ten. It would be a far more top-heavy schedule for Fox, which would help the noon window at the potential cost of Fox’s other windows throughout the day (especially with CBS and NBC involved at 3:30 PM and primetime). If that were to happen, ESPN wouldn’t be in all that bad of a place despite losing the conference’s rights.

So we’ll see what happens with those other conferences. But it’s definitely interesting to hear Magnus go on the record about why ESPN turned down that final Big Ten offer.

[The Marchand and Ourand Podcast]