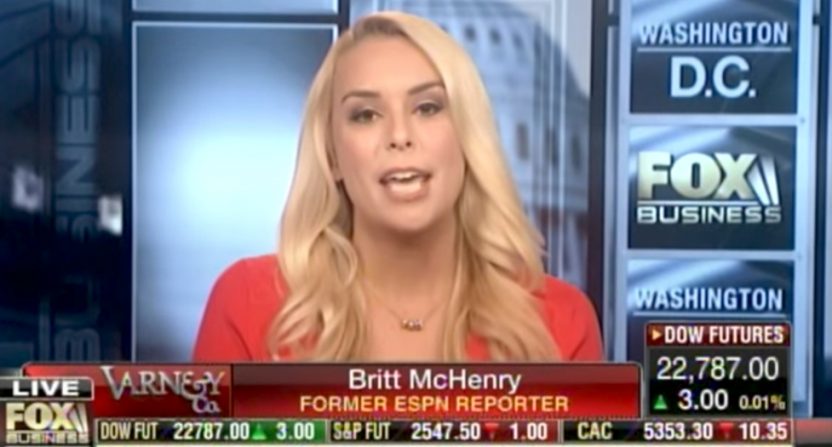 Claiming that you were demoted or laid off on the basis of race is a pretty strong charge, but it’s one that former ESPN reporter and current Fox D.C. political host/sometime Fox News guest/occasional hot take artist Britt McHenry appears to have levied this week. McHenry got in a Twitter argument with some critics Thursday, and in response to a claim that she was demoted and then let go for poor work at ESPN, she said she was demoted because she’s white. She’s since deleted that tweet, but Deadspin’s Samer Kalaf has the screenshot: 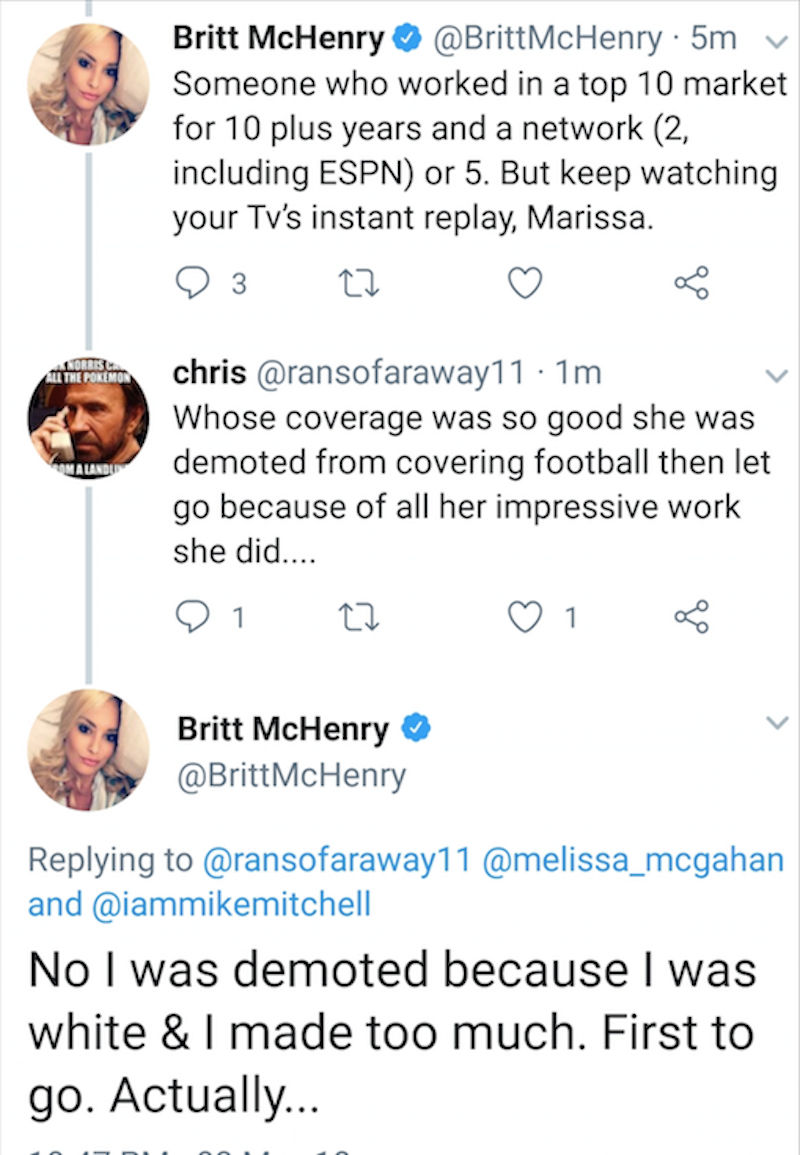 However, McHenry’s subsequent deletion of that tweet suggests she doesn’t fully stand by that claim, and in comments to Kalaf,  she said something different:

Politics is different than race, however. What McHenry said is a big claim and would be a big story! But McHenry didn’t want to talk about this on the record when I asked about it.

“I think there were a number of factors into laying me off,” McHenry said on the phone, before referencing her well-known conservative leanings. “I wish nothing but the best for the people there.”

There are a few things to parse out there. For one, it’s not entirely clear what that “demotion” is referring to. The guy tweeting at McHenry says she was demoted from covering football, but that doesn’t appear to be the case. Even the incident in April 2015 where video of her berating a parking lot attendant over looks and education went viral only led to a one-week suspension, with no mention of reduced duties (although some at the network reportedly wanted to fire her after that). McHenry returned to work and asked the public for a second chance, and apologized further in a December 2016 first-person piece in Marie Claire while claiming the incident didn’t reflect who she was, but coverage of that piece includes a photo of her covering a Redskins game that October. And she even worked the 2017 NFL draft as her last ESPN assignment, covering the Cardinals’ draft from their team site; she was named as part of the massive company-wide layoffs the day before that draft took place.

So, while McHenry was eventually let go, there doesn’t appear to have been a demotion from NFL coverage or any sort of obvious public demotion or changed role. It’s of course possible that she received reduced roles internally in the wake of the tow truck incident, or that, perhaps even more likely, she wasn’t picked for further promotion. But being passed over is not the same as a demotion.

What if those comments are actually about being laid off, though? Well, “made too much” could certainly be a factor. Those ESPN layoffs weren’t just about eliminating jobs (as seen by the hires they’ve made since to fill some of those roles), but about moving on from some highly-paid people, especially those who weren’t in prominent on-camera positions. “Because I was white” is trickier, though. Complaining about discrimination for being white sounds pretty silly, but racial discrimination in employment practices is prohibited by Title VII of the Civil Rights Act of 1964, and a U.S. Equal Employment Opportunity Commission (the federal agency that enforces that legislation) FAQ page says the following:

Title VII prohibits race/color discrimination against all persons, including Caucasians.

Although a plaintiff may prove a claim of discrimination through direct or circumstantial evidence, some courts take the position that if a white person relies on circumstantial evidence to establish a reverse discrimination claim, he or she must meet a heightened standard of proof. The Commission, in contrast, applies the same standard of proof to all race discrimination claims, regardless of the victim’s race or the type of evidence used. In either case, the ultimate burden of persuasion remains always on the plaintiff.

Thus, if there was some proof to McHenry’s claim that she was laid off because she was white, she might be able to try and take some action against ESPN. And that’s what makes this kind of claim notable. However, there would be significant challenges in the way of her doing so, including perhaps that ESPN continues to employ a ton of white people (and in high-level positions, including past president John Skipper and current president Jimmy Pitaro), that numerous minority employees were laid off as well, and that the tow-truck incident in particular probably would be seen by many companies as grounds to part ways with an employee.

And there are many other things that could be brought up as negatives about McHenry, including her much-derided Robert Griffin III report in November 2014, her public feud with Pittsburgh media personality Mark Madden (which flared up again this week), and her public feud with Sarah Sparkman in 2015. Her deletion of this tweet and decision not to reiterate the “I was laid off because I was white” claim to Deadspin makes it seem unlikely she’d pursue anything here, but there would be hurdles for her to clear if she did. (It’s maybe a better claim than the “I was laid off for being a conservative” argument she’s regularly espoused, though, as political views are not a protected class under Title VII; interestingly enough, that legislation even specifically states that firing people for being involved with communist organizations is not an unlawful employment practice.)

At any rate, it’s notable that McHenry would lob this kind of claim out there, even if she didn’t stand by it for long. It fits with the pattern of criticism she’s fired at ESPN since leaving there (including while she was still being paid by the company), but it goes further than most of what she’s said. And it’s further proof of how much things have changed in just over a year. At the end of last April, McHenry was still reporting for ESPN. Now, she’s firing off tweets accusing them of discriminating against her.

UPDATE: Britt McHenry had some more tweets on the matter  Saturday night.

McHenry said that she “wouldn’t make a claim without proof,” and said, “One day in a book. One day soon.”

Trust me, I wouldn’t make a claim without proof. One day in a book. One day soon. #LOL

And her explanation for deleting a tweet (she then deleted the explanation, so here’s the screenshot):

Update: this post initially had McHenry listed as a Fox News contributor. The network reached out to clarify that she isn’t a contributor, but has been a guest.