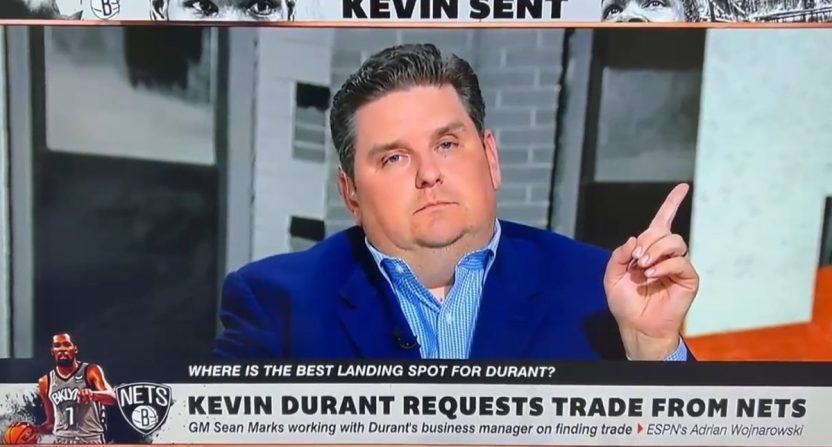 Brian Windhorst’s eminently memeable First Take story about the Utah Jazz last week has been one of the highlights of the year in the world of sports media.

That he ended up proven correct shortly thereafter when the Jazz traded Rudy Gobert to the Minnesota Timberwolves only cemented it as a touchstone, elevating it beyond other fun Windhorst moments (I’m partial to the time he accidentally updated his phone during the first round of the draft.)

Windhorst broke down what made the segment work from his perspective, going into detail as to why First Take was the best place for this to happen and how his hand gestures came when he sort of just slipped into podcast mode.

The reason people liked it is I think it is because it was a different type of story. It’s not what they normally see on TV. One of the great things about First Take is that the A-block is really long. It’s totally different from the rest of our shows. That was a factor that allowed me to have some room.

When you’re telling a story like that, it essentially becomes a podcast, and I have a lot of experience doing podcasts. That’s the type of story you would tell, or the type of scenario you’d tell on a podcast. And even when I’m doing podcasts, even before we put podcasts on video, I would be sitting in my podcast studio alone. Sometimes I used to do them in the dark, because I like doing them in the dark. I would be demonstrative with my hands, even though nobody was in the room.

Which is kind of the way I talk, not normally but the way I talk when I’m talking about the NBA. So really, I fell into doing a podcast, it just happened to be on First Take about a subject that had some mystery to it. And I think you put all those things together and I think people liked it.

It’s interesting hearing Windhorst mention how the structure of First Take itself helped lead to this. It makes a lot of sense, though! Often shows like this don’t afford panelists room to breathe or foster actual discussion. (First Take itself doesn’t always take advantage of this format, of course, but it did here.) Windhorst is maybe underselling his own creativity a bit here, because the combination comedic/dramatic timing on display throughout his performance was absolutely incredible.

Windhorst also touched on the memes, choosing a favorite for understandably self-serving reasons:

If I had a favorite, it would probably be the Target one, only because I’m hoping Target will now call with a lucrative endorsement contract, and in that particular case I would be willing to take that call, Target, thank you very much.

My wife says she’s going into Target for one thing.

Windhorst displaying a nice level of self-awareness on the whole thing while also being willing to dive into the nuts and bolts of why it was even logistically possible somehow manages to offer depth to the moment without overexplaining the joke. That’s hard to do!