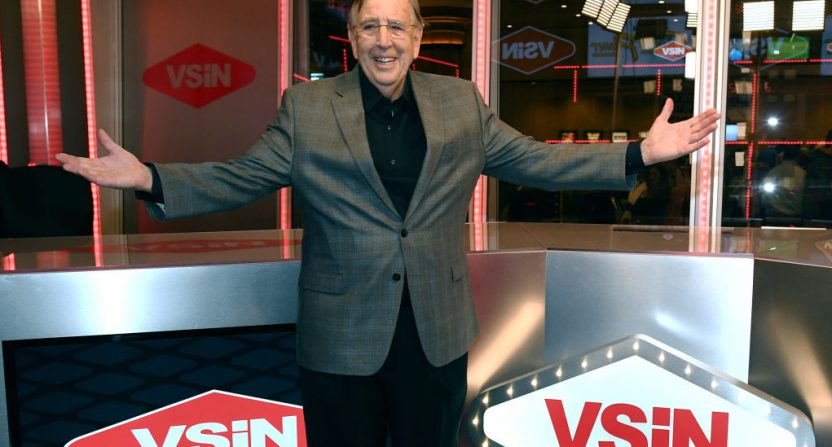 Brent Musburger was honored Tuesday night at the Sports Emmy Awards in New York City for his broadcasting career that’s spanned six decades, calling some of the biggest and most iconic sporting events for a generation and pioneering the modern sports pregame show.

If Musburger has anything to say about it, his newest venture in Las Vegas will take his career into decade number seven.

“It was really nice because a lot of my friends were out there,” Musburger told Awful Announcing, moments after receiving the Emmys’ Lifetime Achievement Award. “That was the best part of it, just being around all the directors and producers who helped me through a lot of broadcasts. Listen, it’s not a one-man thing. Television, you need a lot of help.”

Musburger, 77, was the authoritative play-by-play voice for so many events, including the NBA Finals, the national championship games for both college football and basketball, the World Series, The Masters, the World Cup, the U.S. Open tennis championships, the Belmont Stakes and so much more.

“When I arrived at CBS in 1985 Brent was working the most extensive and impressive schedule any sports commentator has ever undertaken in the history of our industry,” CBS broadcaster Jim Nantz told Awful Announcing via email. “People have forgotten that he did it all for a number of years and that he was brilliant at every one of those assignments.”

If there was a major sports moment over the last 40 years, there’s a decent chance Musburger was somehow involved. From Doug Flutie’s Hail Mary in 1984 and Villanova basketball’s historic 1985 upset of Georgetown to calling a game-winning field goal in the 2011 Fiesta Bowl national championship game being “for all the Tostitos,” there are just some seminal games and calls made by Musburger that we’ll never forget. He was even in the all-time famous Joe Namath photo on the beach in Miami before he guaranteed his New York Jets to victory in Super Bowl III (Musburger said that this is his favorite picture of all time).

Musburger’s career began with some help from the late Dick Schaap, who hired him at Sport Magazine in mid 1960s, helping launch his career in sports. Schaap’s son Jeremy, who works at ESPN, gave the voiceover to Musburger’s tribute at the Emmys.

Musburger’s career at CBS Sports began in 1973, five years after starting at CBS as a local news anchor on television and radio. After calling NFL games on CBS for two years, Musburger was moved to the studio in 1975 to host a new live 30-minute national pregame show called The NFL Today alongside ex-player Irv Cross, former Miss America Phyllis George, and betting analyst Jimmy “The Greek” Snyder. That show ultimately changed the way we consume sports television.

“Irv was the smooth athlete who knew what was going on in the field,” Musburger said. “Phyllis was a groundbreaker.” And Jimmy The Greek was unique in his own right. That show quickly became the gold standard for pregame shows, one that would serve as the blueprint for sports studio shows over the following 40-plus years.

“He set the tone for all these shows we have now, all over the country,” ESPN college basketball analyst Dick Vitale, one of Musburger’s many broadcasting partners, told Awful Announcing. “Almost every network has a show, talk shows like he had back in the day.”

“The NFL Today was a great reflection of his immense talents and was arguably the greatest sports studio show of all-time,” Nantz said.

From the NFL Today came Musburger’s most well-known catchphrase, “you are looking live.” Musburger said that the phrase came from a new feature CBS was trying out during its pregame show, where it would show cameras at the different game sites the network was broadcasting from that day. And instead of describing the weather and the scene at each separate location, Musburger came up with one of the best lines we’ve ever seen in sports.

“The excitement in his voice when he opened with ‘you are looking live’ would bring any sports fan to the edge of their seats,” Nantz said. “I waited all week to hear that line every fall Sunday at 12:30.”

Musburger ended up calling CBS’ biggest games across so many different sports in the 1980s, helping chronicle the Lakers-Celtics rivalry in the NBA, Miami and Penn State trading national championships and football and college basketball in what could be considered its heyday.

“As his ‘understudy’ I was blown away by his work ethic and his energy,” Nantz said. “He never appeared fatigued. He managed it all with a smile and everyone in the department was in awe of him.”

After being let go by CBS in 1990, Musburger quickly became well entrenched at ESPN and ABC, calling college sports, the NBA, baseball and studio hosting duties for everything from Monday Night Football to the World Cup. But it was in college football where Musburger would leave his mark for viewers in the aughts.

Musburger was the lead play-by-play announcer for College Football Primetime on ABC from 2006 to 2013 and called the BCS National Championship game in 2000, 2004 and from 2010 to 2014. Musburger then moved over to the newly-formed SEC Network to be their lead play-by-play caller, often working with game analyst Jesse Palmer.

“For three years I was fortunate to work with a true legend in sports broadcasting,” Palmer told Awful Announcing via email. “Brent’s passion, knowledge and familiar voice became a part sports culture for so many growing up, and I’m indebted to him for sharing his wisdom, his professionalism and his friendship.”

For the last couple of years before he stepped away from ESPN in January, Musburger worked college basketball games with Vitale.

“When I sat next to him, you got goosebumps, man,” Vitale said. “You knew it was a big game.”

Vitale recalled a Kansas-Oklahoma game in January 2016 where they were the top two ranked teams in the country and the Jayhawks ended up winning a triple-overtime classic.

“I had a blast,” Vitale said. “We were looking at each other and I was saying, ‘do people realize that between us, Brent, we’re 154 years old and we’re acting like 12 years old, man.’ He just has so much enthusiasm, energy, and I just love those kinds of people.”

Upon “retirement,” Musburger embarked to Las Vegas to head VSiN, the Vegas Sports and Information Network focused on sports betting and betting talk and analysis, and Musburger has a radio show on SiriusXM called “My Guys in the Desert,” which he could do long enough to take him into the 7th decade of his illustrious career.

After receiving the lifetime achievement award, Musburger was talking about how much fun he had in Las Vegas during the recent Kentucky Derby weekend, seeing the energy and excitement in the room that helps keep him going even after 50 years in the business.

“Who’s had more fun than I had?” Musburger boasted, holding court in the green room after he received his Emmy. “And then off the retirement, I get to hang out in a casino and drink beer and bet games. I mean, c’mon. What’s better than that? I want you to know that. I’ve enjoyed every minute of it.”