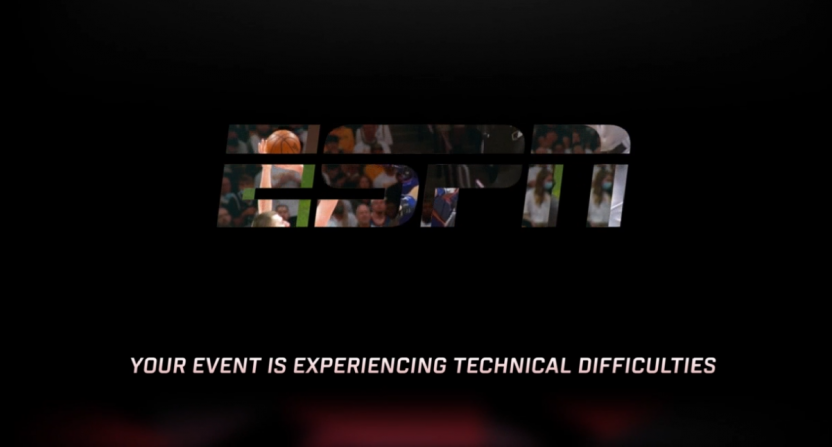 An underrated sports aspect of the Thanksgiving portion of the holiday calendar: non-conference men’s basketball tournaments.

It’s sort of like bowl season for college basketball; there are almost always games on, from earlier in the day (for tournaments in the Caribbean) to tournaments going late into the night (Maui, etc.)

Obviously the pandemic limited things last year (who could forget the Maui Invitational from Asheville, North Carolina), but this year things are a bit more “normal”, which in this case means that if you want to watch Colorado State and Bradley open up the Paradise Jam in the U.S. Virgin Islands at 1 PM Eastern on a Friday afternoon, you could do just that today.

Well, sort of. The ESPN3 broadcast has been plagued with intermittent technical difficulties, from before the game even started onward.

Things didn’t get better, with the broadcast going in and out of a technical difficulties screen throughout swaths of the first and second halves.

At this point i'm ready to say this game wasn't really broadcasted.

ESPN3 having technical difficulties with its feed from St.Thomas Virgin Islands, so livestream telecast is challenged, but Bradley is in a 15-15 tie with Colorado State 6:04 left first half at Paradise Jam tournament.

I've had five "technical difficulties" interruptions on my ESPN+ stream in the 10ish minutes since I tuned into CSU/Bradley. That is a trend that I hope does not continue for when the #CUBuffs take the hardwood.

Our own Matt Clapp (a CSU alum) just wants to watch the game, ESPN!

The nature of the issues points to something on the transmission end. That the broadcast can pop in and out like it’s doing, sometimes for seconds of the technical difficulties stream, sometimes for longer, feels like a “data getting out” issue more than a “clearly something is wrong with production” issue. Some folks on site have noted that the gym Internet has had issues, which would seem like a potential culprit here.

It’s been fairly jarring, though, with action bumped mid-play for the technical difficulties screen, which features some synth music straight out of a 1999 health spa, or if you leave a video game menu up on the screen and the music just keeps repeating.

The music is fantastic though! So much better than the game and repeating commercials…

It might be too late for this game; it’s currently in the final few minutes, and for the last ten minutes or so of real time it’s been impossible to watch.

Hopefully this issue gets resolved; there are three more Paradise Jam games set to be streamed today, and then again through the weekend. (Plus Matt is very excited about his 3-0 Rams squad, and he’s a good guy, let’s try to help him out here.)