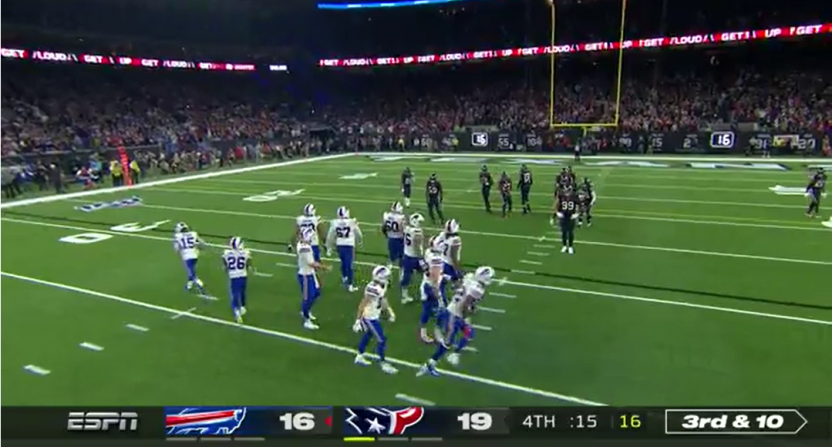 The Houston Texans beat the Buffalo Bills 22-19 in overtime on Saturday to kick off this season’s NFL playoffs, and the game was shown on ABC with the ESPN Monday Night Football broadcast crew and presentation. That meant Joe Tessitore doing play-by-play and Anthony “Booger” McFarland doing color commentary.

It was a particularly rough day for Booger, and it was capped off with commentary in the Bills’ final drive of regulation.

The Bills trailed 19-16 (after blowing a 16-0 lead), and faced a 3rd-and-10 at the Houston 29-yard line with 15 seconds remaining (and no timeouts remaining). Booger suggested that the Bills “run a quick draw play, get a few yards, spike it.”

“I’ll tell ya what, if I’m Sean McDermott at this point, you almost just run a quick draw play, get a few yards, spike it.”

Hopefully you’re still here with us and that didn’t melt your brain.

Booger’s thinking there is some, um, questionable strategy. A quarterback or halfback draw would quite likely not pick up the 10 yards necessary for a first down, and Buffalo was out of timeouts. And if the draw doesn’t pick up 10 yards, spiking the ball on fourth down would result in a season-ending turnover on downs for the Bills.

Additionally, gaining at least 10 yards *and* needing everybody to line up and spike the football could easily take 15 seconds. And even if the run gets a first down and is followed by a spike with time remaining, it would remove any chance of the Bills scoring a game-winning touchdown in regulation (they would just kick the field goal). Oh, and the Bills were *already* in field goal range on this 3rd-and-10.

Buffalo head coach Sean McDermott didn’t go with Booger’s strategy, and understandly took a shot at the end zone, which resulted in an incomplete pass. But Stephen Hauschka kicked a 47-yard field goal to tie the game on 4th-and-10 anyway.

Here’s some Twitter reaction to Booger throughout the game:

“If it’s a fourth down, they have to hustle the field goal team on”
“They’re on now, Boog”

That cannot be a good thing.

Going from Booger to Romo is like . . . okay, I don't know how you measure that.

Going from Booger MacFarland to Tony Romo is like going from Chip Kelly to Kyle Shanahan.

Booger: “I can’t say this enough”

People watching: “All evidence to the contrary.”