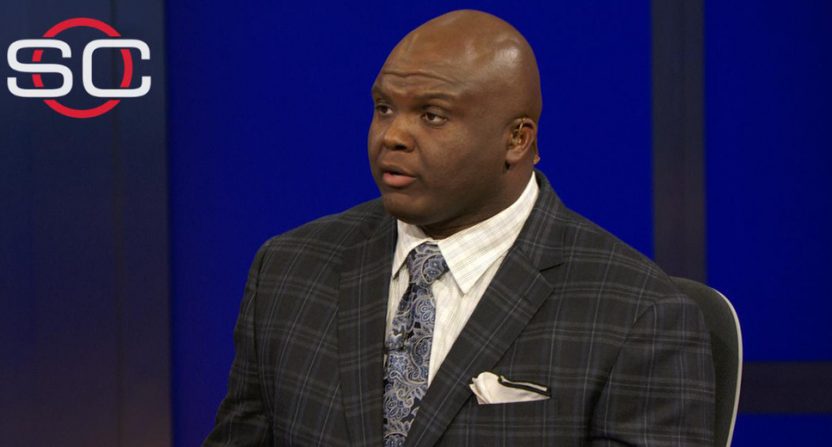 It appears that additions to ESPN’s Monday Night Football team aren’t going to stop with well-compensated ex-Dallas Cowboys tight end Jason Witten. While Witten will be the broadcast’s primary analyst alongside new play-by-play voice Joe Tessitore, The Athletic’s Richard Deitsch reported Sunday that ESPN college football analyst Anthony “Booger” McFarland will be joining the MNF team as a “field analyst”, with Lisa Salters continuing as the sideline reporter (a role she’s held since 2012).

ESPN has used the field analyst (usually a combination of a sideline reporter and a traditional in-booth analyst) role on plenty of their broadcasts over the years, notably with figures like Quint Kessenich in college football. But adding that to MNF is interesting, especially as this isn’t quite a three-man booth (which has often been tried by MNF over the years, most recently with Mike Tirico, Ron Jaworski and Tony Kornheiser from 2007-08) but is a step towards that. This is also a further expansion of McFarland’s role at ESPN; he’s been with the company since 2014, joining first as a SEC Network-specific analyst, but has been featured on many of their college football programs (including regular studio shows and championship Megacasts) since then, and has also expanded his presence in the last few years with more regular stints on shows like Mike and Mike and Get Up, plus a weekly ESPN Radio show with Peter Burns.

Much of McFarland’s work at ESPN so far has revolved around college football, and he’s well known there both for his playing career at LSU as a defensive tackle and his work as an analyst afterwards. However, he also has significant NFL credentials, being chosen in the first round of the 1999 draft by the Tampa Bay Buccaneers (15th overall) and going on to play seven seasons and a half seasons for them, plus half a season for the Indianapolis Colts, winning Super Bowls in 2003 with Tampa Bay and 2007 with Indianapolis. And many of his more recent appearances on the likes of Get Up have involved a lot of NFL discussion. We’ll see how well he does as a field analyst, but he’s certainly an interesting addition there.