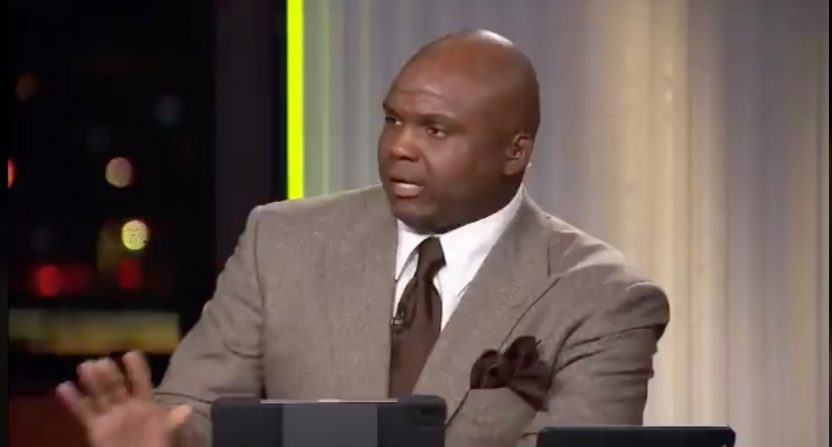 After Dwayne Haskins’ COVID-violating strip club soirée wound up getting him stripped of his captaincy and then released by the Washington Football Team, Booger McFarland is fed up with how the majority of players treat the sport they play in.

While on Monday Night Countdown, McFarland used the Haskins situation to make a larger point about how many players treat the NFL like a game instead of a business. He specifically focused on the African American contingent of NFL players, saying that many of them “come into the league saying not, ‘How can I be a better player?'” and instead “they come in saying, ‘How can I build my brand better?'”

My message was to all players which I said but specifically to the part of the NFL that’s makes up almost 70% the AA players. And of course I’m not speaking to ALL but in my 20+ years around the NFL I’ve seen to many cases. I stand by what I said whether u agree or disagree pic.twitter.com/6buvIc7Tje

“Dwayne Haskins unfortunately is not the first case that I’ve seen like this. And it won’t be the last. And it bothers me because a lot of it is the young African American player. They come in and they don’t take this as a business. It is still a game to them. This ain’t football, man. This is a billion dollar business. It’s billions of dollars. They pay us a lot of money to talk about the game so imagine what they pay these guys to play the game.”

“They play a child’s game to get paid a king’s ransom and it bothers me because I saw a quarterback do it. I saw JaMarcus Russell do it. The No. 1 pick in the draft, they gave him $40 million, and he threw it down the damn drain because he didn’t take it seriously. And it bothers me because there aren’t a lot of jobs like this around. I’m a tell you, I’ve been retired awhile, there’s not a lot of jobs like that around that’ll pay you millions of dollars for virtually six months of performance.”

“So my message to Dwayne Haskins, not just him but the rest of the young players in the NFL. Man, this is a game but take it as a business. There are billions, with a “B,” of dollars at stake. And until you start approaching this game that way. Until you start coming to work saying, ‘You know what, what can I do to get better today?’ ‘What can I do to make sure my teammates are better today?’ ‘How can I put my organization first instead of my damn Instagram?’ Take it as a serious business but too many times, it’s a game. We wanna TikTok, we wanna do all these different things. Man do you know how much money is at stake?”

Naturally, many focused on the racial component to McFarland’s remarks and how he focused on African American NFL players, which make up the majority of the league. Some pointed out examples like Johnny Manziel and Ryan Leaf, white quarterbacks who (like JaMarcus Russell) didn’t take their opportunity seriously and threw it away. That part of the argument isn’t wrong. Black or white, there are plenty of those missed opportunities throughout the years.

What McFarland seemed to be going for, focusing on African American players, is because no matter how fair or unfair this is, the quarterback position is still a “white” position. What that means is despite the majority of NFL players being Black, the majority of starting quarterbacks across the league are white. And if you don’t believe me, look at all the people both in and out of football who just couldn’t see Lamar Jackson as a quarterback (despite being a Heisman Trophy winner as a QB in a pro-style college offense) and felt he was a wide receiver when he was drafted by the Ravens. And speaking of Jackson, he has improved the Ravens in a short time, he unanimously won MVP, and is building his name and business. He also doesn’t seem to be devoted to social media all the time. That seems like what McFarland was talking about when it comes to treating the game as a business.

When someone like Dwayne Haskins squanders that opportunity to not only be a quarterback, but be a Black quarterback starting for an NFL team, it probably hurts more for McFarland personally than when someone like Manziel does it because Haskins may never get a second chance and it makes it that much tougher for the next Black quarterback to come in and show what they can do. Yes, Manziel likely isn’t coming back to the NFL but he got signed by two CFL teams and an AAF team in the hopes of getting back into the NFL. So that faint chance Manziel would someday be back in the NFL was a thing for a few years. Will Haskins even get that chance?

Booger McFarland didn’t say what he said to talk down to African American NFL players. He said what he said because he’s rooting for everyone, but especially African American players, to make the most out of an opportunity so few get and doesn’t want to see them ruin their career before it even starts. If he wasn’t rooting for them, he wouldn’t be that passionate about this. McFarland is an example of someone who played the game and who found a soft landing spot post-retirement as an NFL analyst. And even though someone can do the right things all the time and still never get in the spot McFarland has found for himself, it sure helps to not give anybody any reason to doubt you as a person.