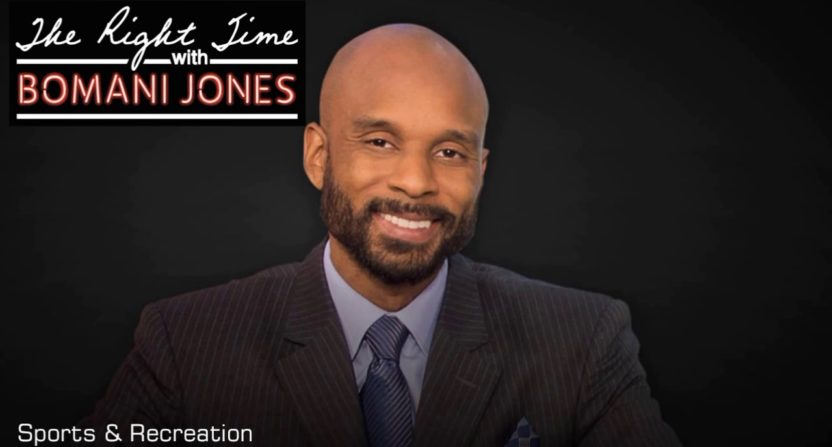 On Thursday, Clay Travis tweeted that Bomani Jones’ radio show had been cancelled “because he’s lost over 90 affiliates & has worst ratings in ESPN radio history.”  Travis would also add in a follow-up tweet that “ESPN will spin it as him quitting to focus on TV. But this isn’t true. Radio show’s a total disaster, like most of ESPN‘s recent decisions.”

While there is some uncertainty about the future of Jones’ 4-7 PM ET show, we’re told no decision has been made or is close and that it was Jones who actually initiated the discussion of vacating his ESPN radio time slot. While Travis alluded to Bristol looking to spin this as a move tied to the upcoming debut of Jones’ new TV show with Pablo Torre, we’re told that even without the show’s imminent debut, Jones would’ve looked to explore options to vacate his radio show. Particularly, Jones had expressed interest in transitioning to some type of digital-only format, something that ESPN was interested in exploring but had yet to substantively explore yet.

We were unable to get much confirmation on his show’s numbers, but one source suggested that although numbers for Jones show have been trending down, ESPN Radio as a whole has been downward trending for the past year plus. Another source said Jones’ numbers are actually holding better than the rest of the lineup across radio and especially digital. We’d love to update our post with any third-party reporting metrics, should you have access to such reporting.

While Jones’ 4-7 ET time slot with ESPN radio on the outside looks attractive, the reality is that the vast majority of major markets produce their own drive time programming which either relegates the show to smaller markets or second or third-tier radio stations in the larger markets. With those factors hard to overcome for Jones or anyone put in that time slot, Jones proactively sought to explore possibilities to produce a podcast or potentially other digital media content formats that would be more flexible to his schedule and potentially less time-consuming.

In retrospect, 9-11 was a better time slot for Bomani's radio show than 4-7, a time period where a lot of affiliates go local.

Travis’ tweet caught many off guard as the conversations about such a move were at an early stage and had not progressed far with Jones and ESPN preferring the status quo until a better fit was identified and agreed upon. ESPN sent Awful Announcing the following statement:

“We cannot comment at this time about specifics, but Bomani continues to be an integral part of our audio strategy and is a key player across a wide variety of ESPN platforms.”

You’d imagine those in Bristol weren’t thrilled with another story getting leaked to Travis and being presented as another example of the company’s declining significance.