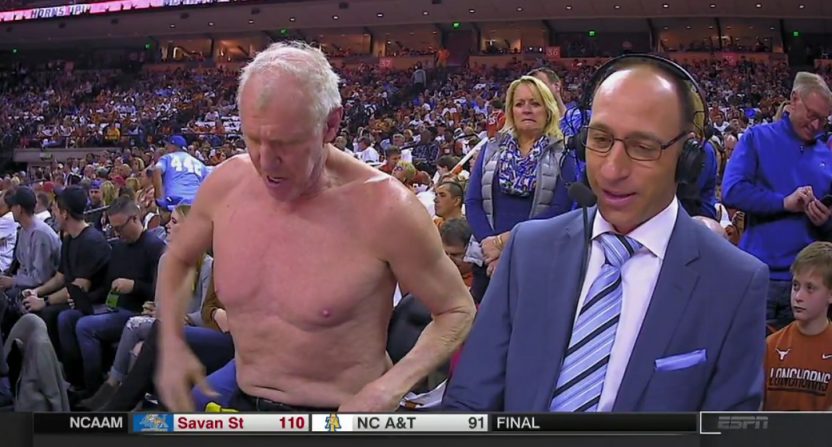 The world got to see a whole lot of Bill Walton Saturday night, as the ESPN commentator briefly got shirtless during the call of the Kansas-Texas game to pull on another tie-dyed shirt with “Keep Austin Weird” on it. The reaction from the woman behind him was priceless:

Let’s zoom in on that reaction a bit more:

Later on, we got to see Walton discussing talking to Stevie Ray Vaughan and Willie Nelson while holding a piece of wood with grass growing on it, which he then gave to Pasch, who gave the camera a priceless look and started brushing it on Walton’s shirt:

Pasch then commented “I’ll bring that on the plane home. Hopefully I won’t get stopped at security,” and asks Walton if they can talk about the game, and Walton goes “It’s a free throw!”

Well, Walton certainly kept Austin weird Saturday. He’s pretty good at that wherever he goes, though, and it certainly makes for entertaining television. Even if the woman behind him wasn’t quite as entertained.