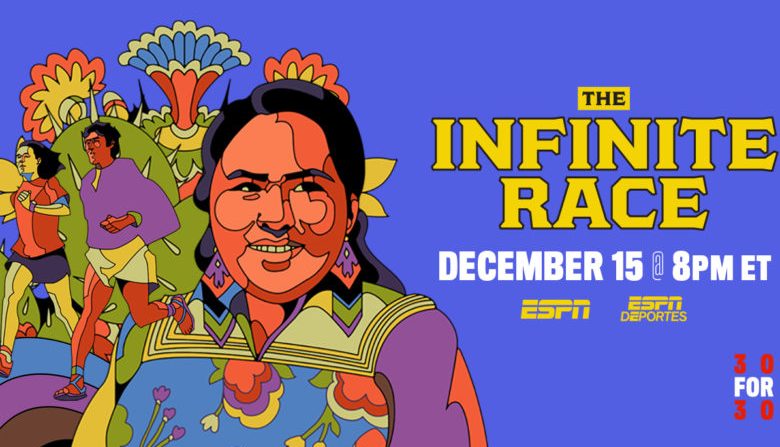 On Tuesday night at 8 p.m. ET, ESPN will premiere its latest 30 for 30, The Infinite Race. The documentary, which will air on ESPN and ESPN Deportes, focuses on the Raramurí community (also known as the Tarahumara), their running feats, the outside attention they’ve received (especially since Christopher McDougall’s best-selling 2009 book Born To Run: A Hidden Tribe, Superathletes, and the Greatest Race the World Has Never Seen). Director Bernardo Ruiz spoke to Awful Announcing last week and said he was inspired to tell this story by a combination of his love of running films and his discovery of a 2017 article about the Raramurí.

“This is kind of an unusual film for ESPN and a 30 for 30,” Ruiz said. “I love the big stories, the series like The Last Dance, but this is not a film about a celebrity athlete or a high-profile athlete or a competition between big teams. This represented something different. I had always wanted to make a running film. When I was a teenager, I saw The Loneliness Of The Long-Distance Runner; I was 17 and I saw it on cable, and I liked the running sequences, but I also loved how it was about British working-class politics. In that case, the film is about standing up to authority and kind of bucking authority. So that resonated for me as a 17-year-old.”

“More recently, a couple of years ago, I read this excellent investigative piece that ran in Texas Monthly by Ryan Goldberg called “The Drug Runners.” And I’d spent a lot of time covering the U.S. and Mexico, the drug war, and organized crime. And it just seemed like a really unique take on that story, one that also featured running. So that basically sparked a collaboration with Ryan and a collaboration with ESPN: ‘Can we tell a running story, but one that also looks at some of these other issues?'”

Ruiz said he appreciated ESPN’s interest in a project that’s a bit outside what they usually show.

“I’m excited that it will be on ESPN. I get that it’s an unusual sports doc, but this is also an unusual year.”

Ruiz has been producing and directing documentaries for over a decade, with some ventures into sports (particularly a 2008 American Experience episode on Roberto Clemente), but many of his more recent films have focused on crime, politics, and social issues, from 2018’s Harvest Season (on wineries and grape-picking in Sonoma and Napa) to 2019’s USA vs. Chapo: The Drug War Goes On Trial to 2020’s Latino Vote: Dispatches From The Battleground. He said he appreciated getting to tell a sports story, but this is also a story with dimensions way beyond sports, one that recalled his experiences in other areas. And that’s a recurring theme for him, one that harkened back to his experiences on Harvest Season.

“In some ways, it’s refreshing, but in other ways, it’s like The Godfather line; ‘Just when I thought I was out, they pull me back in.’ A film I made before this was another low-budget, independent doc called The Harvest Season that was about Napa and Sonoma but looking at the Mexican workers and the small vinters, the family vinters that have roots in the field. I just wanted to make a love letter to that area and to winemaking, small winemaking, but similarly, these kinds of social issues intruded, not because I was looking for them but because they’re just present.”

“In that case, I was there for the 2017 wildfires and how that devastated those communities. I only bring that up because in this case, I was excited to tell a running story, but it felt like inevitably it also became about the context of politics. There too, it’s issues of climate change and drought, which is what spurred a lot of people to run, to ferry narcotics to the U.S., and caused a lot of havoc. I was happy to be taking on a running story and I could put more time on the beauty of running and some of these running traditions, but at the same time, it is a story about the context.”

Ruiz said one notable challenge with this film was that it’s a story many people watching ESPN aren’t necessarily familiar with, so there’s some introduction and context required.

“It’s a challenge to take on a smaller story that not a lot of people know about. I’m not saying it’s easy to do a story about a famous person; that comes with its own set of challenges. Look at OJ. But when you focus on a story like this, you’re having to do some work in terms of providing context.”

He said another hurdle came from the remoteness of the terrain, and from some security worries.

“The other challenge is just logistically; any runner who’s spent time there will tell you that filming in Urique and at the basin of the Copper Canyon and the outlying areas, it’s just physically difficult to get there. And if you have a crew, it’s challenging to get there both for the terrain and then for the security system. I have never worked with security in the past, but I did on this film, mainly because I had a slightly larger crew; we did some drone sequences, we had a crew from the U.S. and Mexico. So in terms of people’s personal safety, that was also a different challenge with this film.”

Ruiz said there were some reasons to be anxious on the security front, but things worked out okay.

“We were never directly threatened, but at different times, I do believe we were under threat. At one point we were followed by vehicles, by pickups, by people with masks pre-pandemic, by people who were recording us and taking photos of our plates, non-police; at least, I don’t know who they were exactly. So there were a few times when it was tricky. And there were armed men outside of the area where the race took place in 2019. Those kinds of things are smaller challenges, but it can be tricky when you’re a sizable team and you’re trying to document it; even if you say you’re there for the race, people are going to be suspicious. That’s just the reality of that part of Mexico.”

The beauty of running sequences in other films was a key inspiration for Ruiz, and he said he was quite happy with some sequences he was able to capture.

“There’s a sequence, it’s the ariwete, which is the women’s race. So you have Irma Chavez, the activist and runner, and it’s kind of a beautiful race where women have this little circle that they pick up with sticks and toss over their heads, so that was something I felt was a really beautiful sequence. And we caught the tail end of the 2019 race where you see Silvino Cubesare [a Raramurí runner] coming in. So I think there were a lot of fun things. But while the running is part of it, I think for me and my team the main event, the main focus, was just kind of the story of the resiliency and resistance of this community and the power dynamics at play between the international runners and the local Raramurí runners.”

And while Ruiz did his research on the race and these people beforehand, he was still impressed and surprised by some of what he saw and some of what he was able to capture.

“The ultramarathon is impressive. It’s a 50-mile race that’s conducted in the Copper Canyon every year, and it is an incredible thing to see people from Germany and the Netherlands and New Zealand competing against local people, sometimes people wearing jeans and sandals. It’s kind of a wild event.”

“At the same time, it is kind of incredible that these running traditions that have been around since before the arrival of the Spanish, the Spanish conquest, that these traditions have somehow managed to survive. There’s something very unique about that. I knew about that intellectually, but being there and witnessing that and being able to document fragments of that was a privilege, and something kind of unique.”