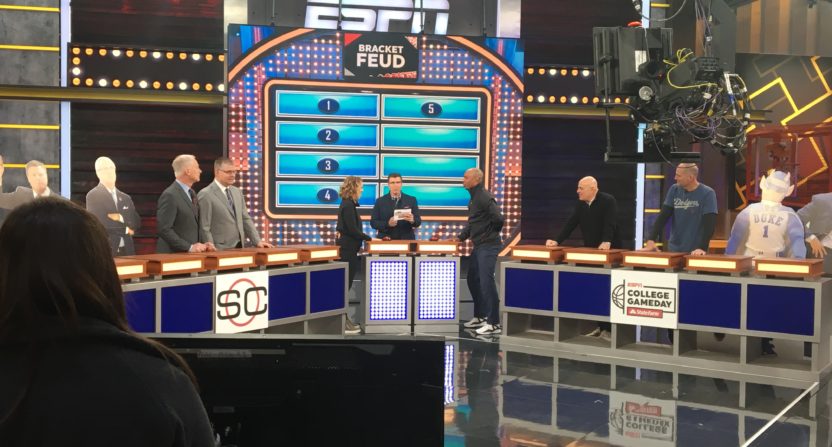 Minutes before the start of ESPN’s second annual Tournament Challenge marathon, Jay Bilas plopped on a couch outside the studio where he was about to spend the better part of 25 hours and explained that he had only one tiny reservation about the upcoming all-nighter.

“I would feel better about it if we could have a few beers before doing it,” he said. “Aside from the lack of adult beverages, it’s fun.”

For the second straight year, the Tournament Challenge marathon, which began at 6 p.m. ET on Monday and runs through 7 p.m. ET on Tuesday, has served as a culmination of ESPN’s men’s college basketball coverage. Before the network passes the hoops baton to CBS and Turner Sports for the NCAA Tournament, it immerses itself in brackets for one more basketball-filled day (while also relentlessly promoting its yearly March Madness pool, of course). That means for 25 straight hours on ESPN and ESPN2, at least one of Jay Bilas, Jay Williams, and Seth Greenberg was appearing on air, either on a Tournament Challenge special or on one of the network’s regular shows.

I stopped by ESPN’s Bristol, Connecticut studios Monday night to witness the marathon magic. Here are some things I learned from watching up close and chatting with the guys in the analyst chairs.

1. Jay Bilas is not an all-nighter kind of guy. Jay Williams, on the other hand…

Bilas told me he has never been the type to stay up all night. In fact, last year’s marathon was only his second ever all-nighter.

“I never pulled an all-nighter staying up for a test,” Bilas said. “I think the only time I ever stayed up all night was when I graduated high school and they had what they called ‘grad night,’ and they locked every high-school kid in Southern California in Disneyland overnight so you couldn’t get in trouble. I stayed up all night then and then this [last year].”

After Bilas’ story, I turned to Williams and asked about his history with all-nighters. He and Bilas both laughed.

“I enjoy the night,” Williams explained.

2. You might think everyone rested up before the marathon. Not quite.

Bilas, Williams, and Greenberg were on site for the ACC Tournament, which ended Saturday. Then they drove back to Bristol and were quickly thrust into bracket-related duties. Bilas even had an article published Monday on ESPN.com.

That left little time for sleep. Bilas said he got three hours of sleep Sunday night leading up to the marathon, while Williams said he got five.

3. Bilas, Williams, and Greenberg did not exactly ask for this — not that they would complain.

I kind of figured that once you get to be Jay Bilas, your boss has to consult you before deciding you’ll spend 25 straight hours on camera. It turns out that’s not exactly how it went down.

I asked Bilas what he said when a higher-up told him about the marathon concept last year. His response: “Yes, sir.”

“We didn’t really have a chance to say anything the opposite,” Williams added.

Still, everyone seemed enthusiastic enough about the concept.

“It’s crazy, it’s different, it’s exhausting,” Greenberg said. “But to me, different is good. They always say at ESPN we want to be memorable, and 24 hours of brackets is memorable.”

4. Prep is not as intense as you would expect.

Another thing that surprised me: Bilas, Williams, and Greenberg all said Tournament prep is fairly easily for them, even when it comes to No. 15 seeds from one-bid conferences.

“At the beginning of each year we pay attention to so much basketball,” Williams said. “For me, I pay attention to what the mid-majors do throughout the course of the year. We see so much of the power conferences all the time, I actually find it more intriguing when you get to watch really good mid-major teams play throughout the course of the season. … It’s easy to update yourself if you always follow it. It’s not like you have to turn a switch when March comes around.”

5. Participating in the marathon is kind of like coaching in a conference tournament.

Here’s how Greenberg, who coached 22 years at three schools before joining ESPN in 2012, describes his attitude toward the quick turnaround entering the marathon: “I look at it like when you play in a tournament, win and have to play again the next day. So what do you after the game? You break down your film, go over your scouting report, you stay up basically 24 hours, you get two hours of sleep and then you present the scouting report to your team and go play the next day.

“So I’ve done this before. I’ve just never done it in front of America, having to speak legible English, not trip on my tongue and not say, ‘crap.’”

6. Every studio show should have a brass band.

The Funky Dawgz Brass Band stood above the set for hours, playing in and out of commercials and between segments. Whoever decided to put them there deserves a raise. Whoever makes the call to add a live band to every ESPN show deserves to run the network. 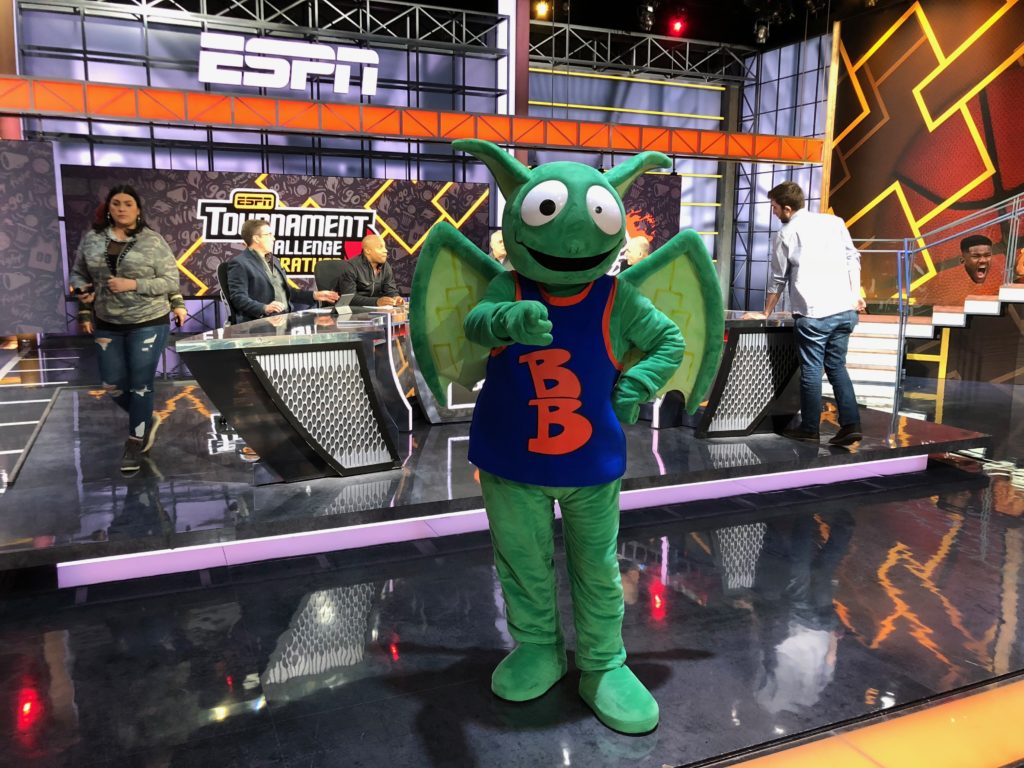 I don’t know this thing’s name, what he’s supposed to be or why he was on set for much of the marathon. I assume the “BB” on his shirt stands for basketball, but I’m not entirely sure, and I don’t feel like I particularly need to know. Regardless, he was a fun addition to the show in an absurdist kind of way.

8. The mentalist ESPN had on its shows over the course of Monday is a goddamn sorcerer.

For reasons that never became fully clear to me, ESPN on Monday hosted a mentalist named Oz Pearlman, who appeared on various shows reading the minds of ESPN talent. In one segment that went somewhat viral, Pearlman asked Jalen Rose to write down an NCAA Tournament matchup and a score, then somehow conveyed to Mike Greenberg what Rose had come up with.

THE MENTALIST DID WHAT!? ? pic.twitter.com/16P3KkJjX3

Naturally, many people who saw the mentalist segments assumed they were set-ups. But I was watched two of Pearlman’s bits from inside the studio and witnessed about eight ESPN personalities walk off set looking Kevin McCallister-level spooked. Ten minutes after participating in one of Pearlman’s tricks, Greenberg was still trying to explain the voice in his head to a crowd of bewildered onlookers. As far as I can tell, there was no conspiracy, just deeply unsettling magic.

I caught up with Williams on Tuesday afternoon during the home stretch of the marathon. He said that over the course of the 22 or so hours to that point he had stolen about 90 minutes of sleep. It would have been more, he said, except that while he was trying to catch some shuteye between hits, Bilas was snoring on the adjacent couch, and when he sought another place to lay down, he wound up in a room with motion-activated lights that wouldn’t stay off.

Next year, ear plugs and a mask might come in handy.

10. Everyone gets a little grouchy.

“[Last year] was fun until about the 22nd hour,” Greenberg recalled. “Then we had to deal with grumpy Bilas. Bilas is [always] grumpy, but after 23 hours when his feet hurt he becomes really grumpy.”

11. When the marathon ends, it will be time to… watch basketball.

On Tuesday afternoon, having already not slept soundly for a day and a half, Williams was not plotting an early bedtime. To the contrary, he was fretting that he might fall asleep during the night’s “First Four” games. After talking about basketball on air for 25 hours, all he wants is to watch more basketball.

Because in the end, these guys really, really like basketball. Enough, even, to make staying up all night talking about it enjoyable, with or without adult beverages.