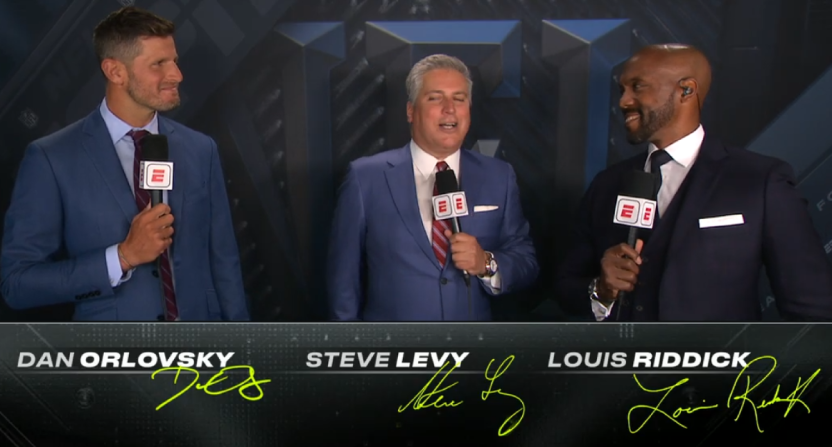 Let’s start with one important point: ESPN’s new #2 NFL crew of Steve Levy, Louis Riddick, Dan Orlovsky, and Laura Rutledge aren’t bad. This isn’t a hit piece in the slightest, even though Thursday’s Bears-Seahawks broadcast from Seattle was far from perfect.

In fact switching in Orlovsky for Brian Griese was probably a step up. There were plenty of mistakes, though, including Levy mistaking…someone (maybe former Bears defensive coordinator Sean Desai?) for Chicago general manager Ryan Poles.

No one in this shot is Bears GM Ryan Poles. pic.twitter.com/aDpdnWLhdP

ESPN is going to be doing multiple doubleheaders this year, which means keeping most of their former top team intact as a backup booth makes a lot of sense. And this group did a lot of work steadying the ship for ESPN, which had gone through some tough years thanks to gaffe machine Jason Witten and failed innovations like Booger’s crane.

Watching the Bears shut down the Seahawks in a meaningless preseason game (as are all preseason games), though, some of the seams started to show.

Orlovsky will undoubtedly get more comfortable, and he certainly brings a ton of knowledge of the modern NFL to a broadcast. Levy is a veteran presence, solid but still more of a studio man in terms of his calls. Louis Riddick is probably the most welcome presence, but he gets a bit lost in the three-man shuffle, especially with Orlovsky now treading some of the same modern football ground.

Again, a few early-season mistakes aside, this is a group that would probably slide in comfortably in the mid-tier of the Fox or CBS roster of NFL booths. Having said all of that, watching them call a game with low-stakes that turned into a blowout, it was clear that it’s not a booth capable of elevating a game like this.

Would Joe Buck and Troy Aikman have been able to do it? That’s not a given. According to Mike Florio of Pro Football Talk, Buck and Aikman were actually in Seattle doing a practice call in preparation for their Week 1 debut.

We're told Joe Buck and Troy Aikman are in Seattle, doing a rehearsal. Which makes sense. After 20 years together, they probably need a tune-up before they debut with ESPN.

If there’s one thing Buck and Aikman bring to Monday Night Football, though, it’s this: they’re one of the few booths that make a game feel bigger. That’s what happens when broadcasters spend decades together calling Super Bowls, huge playoff games, and one of the top regular season games every week of the season.

The #2 group doesn’t have any of that history, nor the weight and gravitas that would accompany it. Buck and Aikman have their detractors, too, although they’re much fewer now than they were at the start of Buck’s career. (With good reason! He’s gotten a lot better!) In addition to that “event” feel that’s been lacking from Monday nights for years now (probably since the days of Tirico and Gruden), though, Buck and Aikman also have an ability to just be loose and entertaining.

Who knew a broadcast could have me clamoring for Joe Buck and Troy Aikman, but this broadcast is achieving that feat tonight

That, more than anything else, was what Bears-Seahawks needed. ESPN could have reanimated Howard Cosell and John Madden to call that game and it would have still been a meaningless blowout. (Don’t get any ideas, Fox.) Games like that require the ability to acknowledge just how silly and pointless it is, while remaining entertaining enough that viewers don’t want to turn it off.