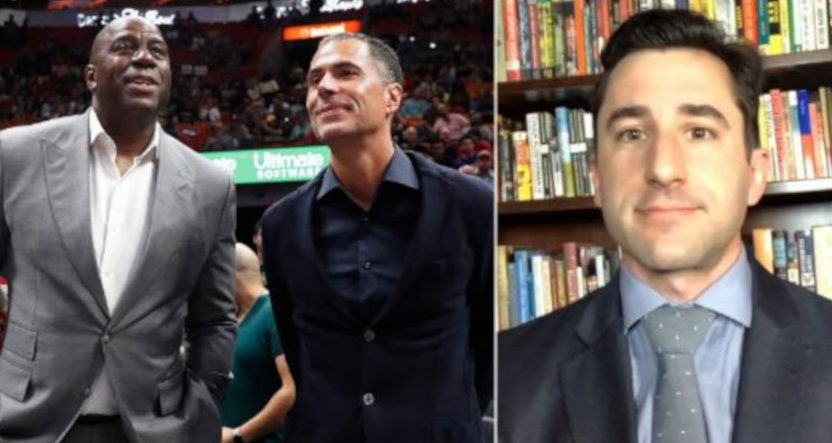 A big media story this week has been about ESPN.com publishing Baxter Holmes’ investigation into the Lakers Tuesday morning and ESPN’s TV side then spending much of the day ripping that story, including Stephen A. Smith doing so on both First Take and his own radio show and then in a softball interview (alongside Michael Wilbon) with Magic Johnson. There’s been plenty of criticism of that from the outside, including from former ESPN anchor Dan Patrick, who suggested on his own show Wednesday that ESPN should have had Holmes in on that interview to defend his piece and the serious allegations within. And in a podcast interview with ESPN’s Zach Lowe that was published Thursday, Holmes discussed the story and the response to it in in detail, and revealed that he was actually in the same ESPN building where Johnson was ripping his story on-air, but was only watching that interview on TV. That part of the conversation comes about the 10-minute mark here, where Holmes discusses the response to his story:

“It was a long day. I couldn’t tell you how many messages I got, phone calls, e-mails. I don’t know how many TV hits or radio hits I did yesterday. It was a lot. I was basically up…I didn’t sleep the night before because I had a lot on my mind, and it was just the car wash that we do. But yeah, he was in the same building that I was in. I was on a different floor and was watching what he said. And then I had to do interviews about my response to him and his comments about never being in a HR person’s office, an HR director’s office.”

Holmes then says while Johnson’s comment about never being called into HR may be accurate, there are reasons why complaints about him weren’t taken to HR.

“When he was talking, here was my first thought, I actually thought about something that wasn’t in the story. And it was something that a staffer told me about the day that Earvin was hired, and the staffer said ‘I thought the building would have to burn down for him to lose his job.’ And it was representative of what many people say was the power, stature and deep connections that Earvin had to the Lakers and to Jeanie. And as he would display instances of confrontational behavior, demonstrative in these interactions with employees, they would say ‘I can’t stand up to him. He’s Earvin Johnson and this is the Lakers. Who am I?’ They would describe being powerless, but more to the point, they would talk about not being comfortable going to HR with these particular complaints about his behavior.

“Which is indicative, we see this all the time in stories about a toxic workplace, a hostile workplace. There’s always that paragraph, ‘People did not feel comfortable going to HR to raise issues.’ People would say to me it was because they feared reprisal, they didn’t believe HR would stand up to Magic, the repercussions would just fall on them, they were afraid, etc, etc. So he can say there were no complaints filed against him, he’d never been in that office, but I was thinking back to particular comments that staffers had raised to me of being fearful of him. And there were a lot of comments on that regard. There were plenty in the piece, and some didn’t make it.”

Lowe then asks “Do you believe that he is, or was now, I guess, I don’t know what the right word is, tyrannical, abusive, frightening? Do you believe that? Because you have people in your story who say it, who use those words. [He then tells a story about getting yelled at during an internship at the NFL when he screwed up, and accepting that.]…So I just put it to you, do you think he was that unusual, do you think that this was a problematic workplace?”

Holmes responds “Based on my reporting, I would say yes. There were tons of people who would describe…I don’t want to say tons, I talked to more than two dozen people who were in the organization or close to the team. They would describe this duality to him, there’s Earvin and there’s Magic. People would talk about ‘Everyone’s on pins and needles around him, everyone’s on edge.’ I think somebody said to me at one point ‘You’re never in a conversation with him where you don’t feel like he’s threatening you or your job.’ …There were other interactions with staffers, described to me as berating, that didn’t make the story. I also heard from people yesterday who had interacted with him, I won’t go to deep into that, but they said ‘That dual side to him is very real,’ and there would be silence after that. So I feel I’m on pretty solid ground about my reporting here.”

Earlier in the podcast, Holmes reveals some details about his reporting here, including that he started on it after the February 2018 Sports Illustrated story on the Mavericks’ “corrosive workplace culture” (which included allegations of sexual misconduct and domestic violence, two elements not present in the Lakers story). He says that story led to sources telling him the Lakers’ organization had its own issues. He then says he considered potential bias from former employees, and the elements made the story made it thanks to widespread confirmation from a variety of sources.

“Once you start hearing the same story independently from all kinds of people, regardless of whether they’re still there, used to be there, regardless of how they left…I would hear it from people who said nothing but the greatest things about their times there, ‘I love the Lakers, I will always bleed purple and gold,’ but one particular person was like ‘But the things that are going on, I didn’t experience them, but I saw them, I know specific instances my colleagues went through,’ one person who was very measured was like ‘These things are shameful, disturbing, no company should be like that.'”

“It took a lot of time because I wanted to be sure these accounts were representative of a lot of people, and across multiple departments. That was something another former staffer said to me, and my reporting bore that out; it’s company-wide. It’s not ‘This is happening in marketing and people feel this way’ or ‘This is happening in basketball ops.’ From the court, it extended through virtually every single element of that organization.”

After the discussion of Johnson and Johnson’s response, Holmes goes on to talk about Lakers’ GM Rob Pelinka and how Pelinka decided to decline to comment, including on the discussion of Pelinka making up a story of arranging a dinner between Kobe Bryant and Heath Ledger after Bryant saw The Dark Knight, which premiered in July 2008, months after Ledger’s death in January 2008. Holmes said that story was notable for the questions it raises about Pelinka’s honesty in general.

“Rob declined multiple requests to be interviewed for this story. It’s a particular anecdote, amongst many other things, that I would like to talk to him about. …Here’s why that story matters in and around the organization. First, people considered it highly dubious when he said it. But they’ll say, I’ve heard comments such as this, ‘If he is so brazen as to potentially tell a story as if it were true, that he’d set up a dinner with his client, and I don’t want to put too fine a point on it, but set up a dinner with his client and a dead man, what will he not be dishonest about? How can we trust whatever kind of information, conversations he’s had with this person or that person?’ It became a way, and there’s other instances too, so it’s not like one story’s just being used in broad strokes, but that particular story  was like ‘Yeah, it’s absurd.’ It creates a credibility issue. So that’s why I would say that story, for as ludicrous as it is, matters.”

“I thought it was telling that people in the organization, I think it was mentioned in the Spellman anecdote, that Rob will go and say to people ‘We’re making this decision and it’s because this player wants it or this agent wants it,’ and people had become so distrustful of him that they will literally go back to that player or to that agent and say ‘Hey, did this conversation ever actually happen? Did you say these things that Rob said you said? What was the context here?’ And I thought it was interesting, fact-checking the reasons behind it. But yeah, people not being on the same page, this uncertainty about how decisions were made, ‘What information were we using, is this information credible,  are we even consulting with people in our organization who have first-hand experience with this particular player?’ It creates a rat’s nest of issues with respect to team-building, free agency, drafts, trades, all of it.”

Overall, Lowe’s conversation with Holmes is interesting, and it provides some insight into how this story came together and how its revelations should be viewed. And there’s a good back-and-forth discussion here on particular elements of the story, including how the Lakers’ organizational behavior compared to other NBA teams. And it’s good that Holmes got the chance to defend his story and his reporting here, and explain how and why he reported what he did.

But the discussion of Holmes being in the same building as Johnson during ESPN’s soft-soaping Johnson forum, and just watching that on TV, really illustrates how badly ESPN dropped the ball there. They could have had the actual journalist who wrote the story discuss it publicly with Johnson (and it’s notable that Holmes mentions Johnson declined his requests for comment pre-publication). Instead, they had Smith and Wilbon let Johnson dump all over their colleague, with next to no pushback or questioning.

And that seems to show the divide in ESPN’s handling of this subject; the dot com side gave Holmes the time and resources to pursue a notable story on the Lakers, did significant fact-checking on it, and published it, and the TV side gave him some limited push (including a Get Up appearance), but then the TV side got Smith to bash it all day without much rationale and then gave Johnson his own airtime to dispute it (and without any sort of check on or response to Johnson’s own claims). As Patrick said Wednesday, “You can’t brush it off just because you’re friends with Magic Johnson.” But ESPN’s TV side largely did just that, and learning that they had Holmes in the same building during that Johnson interview and didn’t use him really helps illustrate how badly they failed here.

[The Lowe Post on ESPN Radio; photo of Johnson, Pelinka and Holmes from ESPN.com]