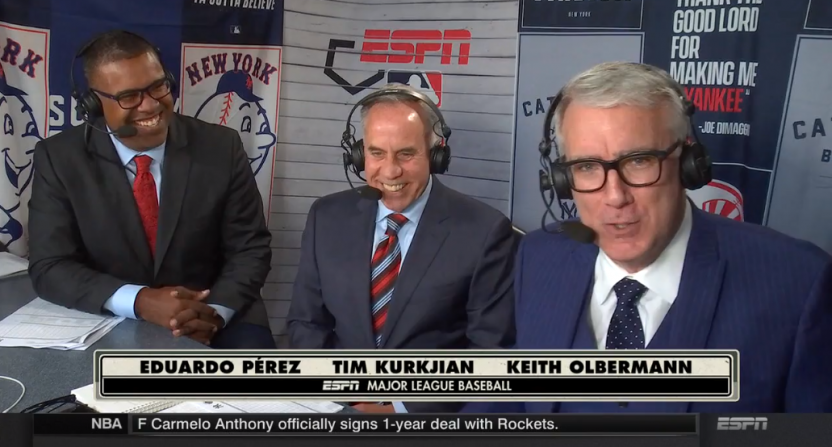 Keith Olbermann returned to ESPN this year, with his duties including hosting about 20 editions of the 11 PM SportsCenter over the course of the year, appear on studio shows (he’s guest-hosted some PTI, for example), and even do some baseball play-by-play.

Entering Monday night, Olbermann had only called baseball on ESPN Radio, but he filled in for Karl Ravech for Monday’s Mets-Yankees game at Yankee Stadium. This was a makeup game for a Mets-Yankees rainout on July 22, which was a Sunday Night Baseball game. So, Monday night’s game was an exclusive ESPN broadcast, meaning Mets and Yankees fans couldn’t watch the local team broadcast.

Hey @ESPN, do a quick twitter search of "Keith Olbermann" and maybe think twice next time you want him to call a game.

ESPN has an exclusive window in New York because of SNB rainout. With all eyes on it, putting Olbermann in the booth was a bad decision. This game doesn't need a gimmick.

It also is not a good decision internally. How many more loyal to ESPN play-by-players than Olbermann would kill for the opportunity to do Yanks-Mets? Reward them.

That ESPN thinks Keith Olbermann is a good idea tells you everything you need to know about ESPN.

I think it's safe to say this experiment of Keith Olbermann calling MLB games has become a disaster. He makes Joe Buck sound like Vin Scully. That's not easy to do.

My apologies to Joe Buck, Keith Olbermann is the worst announcer in sports

ESPN finds a way to punish Mets/Yankees fans by putting Olbermann in the TV booth tonight.

If you think Im listening to 3 plus hours of Keith Olbermann youre out of your mind. Mute

Keith Olbermann doing play by play might be the worst sound I have ever heard in my 45 year life. I might never be able to watch baseball again after listening to that for a half inning. #espn

Listening to Keith Olbermann call a baseball game is as torturous as it sounds.

Play-by-play is incredibly difficult and the results shouldn’t be expected to be great for a person who’s rarely done it… which makes the decision to throw Olbermann on this game even more puzzling.

Here is the thing on play-by-play: It is harder than it looks

There were several awkward moments on the broadcast, like during an in-game interview with Noah Syndergaard that included some dead silence which left Syndergaard wondering what was going on.

The dead silence in this Mets-Yanks telecast on ESPN is painful. When the player being interviewed (Thor) has to basically ask if he's still on, something's amiss

It’s no surprise that the organization is lacking when announcers aren’t used to working together, and the play-by-play guy has little experience with the job.

It will be interesting to see if ESPN gives Olbermann more baseball play-by-play duties on television after this.