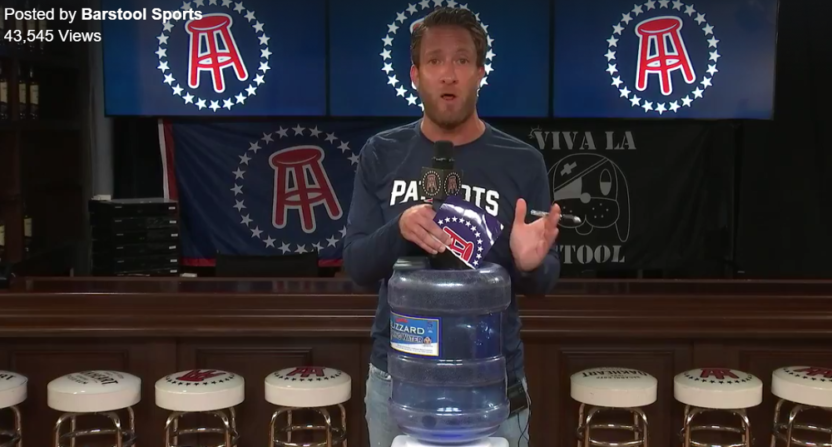 In the wake of ESPN’s cancellation of Barstool Van Talk Monday after just one episode aired, Barstool Sports founder Dave Portnoy took to Periscope and Facebook Live for an “emergency press conference” to address the cancellation. He had some strong words for Barstool’s critics inside ESPN, most notably Sam Ponder and Sarah Spain, blaming Ponder for waiting three years to respond to Barstool’s comments about her and saying that Spain blasted Barstool because she wanted her own show.

He also said that 95 percent of ESPN employees like Barstool. Here’s the video (Portnoy’s comments begin about 2:55 in; the quote in the headline is from near the end):

“Alright, emergency press conference. As I’m sure most people know, well, maybe not know, if you’re watching this, you probably know, ESPN has unfortunately cancelled Barstool Van Talk. The pressure, basically, that they got internally, primarily the Sam Ponder tweet, was too much for them to overcome. And people are expecting scorched earth right now; you’re going to get in between. Cause I actually get why ESPN cancelled the show. The executives there were put in a box.”

“Sam Ponder, I’m not even really mad about her tweet. That was a grudge move. We attacked her. She waited for three years to drop revenge on our heads the night before. And she got accomplished what she wanted to get accomplished. She got the show cancelled. From what we heard, there was a mini-uprising. When I say mini, I guess like 95 percent of ESPN employees actually like Barstool. And there’s a small minority, either for real reasons, they want their own show, shoutout Sarah Spain, whatever the case may be, there were people who didn’t like the show. And with anything we do with Barstool, the silent, the vocal, minority stamps their feet, goes loud, loud, loud.”

“But here’s what this does. By the way, I feel bad for PFT, I feel bad for Dan, because the show was very good, it crushed in the 1 o’clock hour. For a debut, I think it was excellent. So I feel bad for that. Here’s what I don’t feel bad for, and here’s, in a weird way, what has reinforced what I already knew. This is exactly, and I mean exactly, why Barstool Sports has to exist. It has to. Because we’re one of the few places, maybe the only place on the internet, where we don’t let agendas dictate what we do.”

“Like, three years ago, I guess I called Sam Ponder a word that in hindsight I wish I took back so this didn’t happen. But I don’t take back the riff. I don’t take back any of it. By the way, my legs are going to die on this stool. But that’s how we act. For 15 years, people who have followed this company know, we just talk, shoot the shit, try to be funny, don’t let PC America get the best of us. And we’ll continue to do that.”

“That’s why ESPN had to turn to us. ESPN needed us more than we needed them. Everybody saying ‘ESPN’s not cool,’ no one’s paying attention to ESPN. They’re all paying attention to the Barstools of the world. Why? Because we’re authentic, and issues like this don’t happen. They got pushed around. Anybody who thinks the ESPN executives want to cancel this show are nuts. They’re a Walt Disney company. They’ve got to cater to all the complaints and what the few say. We do not. We will not. This is not our first controversy.”

“This reminds me of WEEI back in the day. So, WEEI, they called me up because the same thing was happening to them, ESPN was struggling. They put me on the air and a controversy erupted outside of WEEI airwaves. And it’s like that Batman quote. In a time of desperation, they turned to a man they didn’t really understand. And that’s what ESPN did here. John Skipper saying he thought he could distance himself from Barstool, don’t know what that means. You hired Barstool. The deal was with Barstool. The reason you needed us is because we’re Barstool.”

“That’s why this audience exists. It is not going anywhere. And all this does is just reinforce the very reason we’re the fastest-growing media company in the world, because we don’t care about this. We will suffer a couple setbacks, we’ll take a couple Ls, but it just makes us stronger, stronger, stronger, because we’re not changing. I haven’t apologized for that rant. I wish I didn’t use the word, because three years ago it was a very different social climate, and we’re ranting on something that I thought was fair.”

“It’s weird, by the way, how people do that with Barstool. They’ll look, and say ‘What we said five years ago doesn’t count, but we will count what Barstool said five years ago against them.’ Again, it is what it is. ESPN had to know who they were getting in business with. We didn’t change. We’ve been the same people for 15 years. The only thing that changed is their own internal employees had a mutiny, for reasons maybe some legitimate, some agenda-driven, but I’m promising you, what these people did is going to make Barstool stronger.”

“Like, you want to see the difference between ESPN and Barstool? You want to see why everyone says Barstool’s going to be the next ESPN? It’s this. Because we do things our way, and we’re going to continue to do it. And people who have been with us forever know we’re not sexist, we’re not chauvinistic, we’re not any of it. We make fun of everyone. To be honest, ESPN, if you want to worry about a company uprising, I have said far more aggressive things, far more offending things, far more over-the-top things about all their NFL guys. Guys. Chris Mortensen, Sal Pal [Sal Paolantonio], I’ve showed up, I’ve mocked these people, I’ve heckled these people.”

“So to say, ‘Oh, I didn’t know how to distance from Barstool…’ We make fun of everybody. It’s 15 years, I keep saying it. I haven’t chosen my words carefully. I haven’t tried to offend people on purpose. We just sit in a room and talk and we try to be funny and bring a little bit of light into people’s days. We’ll continue to do that. We’re not going to let advertisers, we’re not going to let Mickey Mouse push us around. And in the end, I keep telling you, this is going to make us stronger. It sucks that the show is off, but for the future and the confidence of this company, there’s nothing that ESPN actually could have done to illustrate why we are rising and why they are falling.”

“I get why they had to do it. They’re a much bigger company, stock, investors, all that stuff, headaches. Maybe it wasn’t worth it. For Barstool, we will move on and we will get stronger, like we always do. We have anything worth talking about, by the way? Comments? Anything?”

The producer handling comments asks “Should the Stoolies now boycott ESPN?” and Portnoy responds “I mean, they’re already not watching ESPN anyways. …Not over this, watch ESPN if you want to watch ESPN. ESPN needed us because they’re not watching, they’re watching us. So that will continue, and it will continue to rise. The only thing that may change, for all you Stoolies out there, is we may eventually be like ‘We’ve got to take money out of your pockets now,’ we may do subscriptions or different things like that, because we’re willing to sacrifice outside pressures which will dictate what you do to keep our content real. So that is part of it.”

The producer asks “Do we see Barstool Van Talk continuing somewhere else?” Portnoy responds “It could. I mean, the show’s good, those guys did great, and we’ll see what happens. You know, that’s pretty much it, I think I said it all. People are probably expecting more of the burned, it’s not. In a weird way, it’s like ‘Oh my god, ESPN, you just played right into our hands. How stupid were you to think you could get Barstool without getting Barstool?’ Like, we haven’t changed.”

“And Sam Ponder, she drops the tweet the day before, all of her reasons, whatever, it’s a grudge move. I don’t agree with all of her reasons why she said she did it when she did it, but as a guy who loves to hold a grudge, it’s tough to be like ‘Ooh, this girl waited for three years to drop it the day before the show aired.’ Kind of tip the cap and move on. ESPN, if it wasn’t going to be her who complained, somebody was going to complain. We bashed so many people there. You’d think they would have known that.”

“Again, we’re just going to get stronger. We’ll continue to sail. The flag has never been higher. And we’ll keep shooting our cannons. Unfortunately, for a world where everyone’s like ‘Why is everybody watching Barstool? What makes Barstool so good?’ It’s the authenticity, and nobody else can do it. We’re in a unique place to do it. And we’ll continue to do it and get stronger. So that’s pretty much it. Music? Can I have some fucking music? Okay, good.”