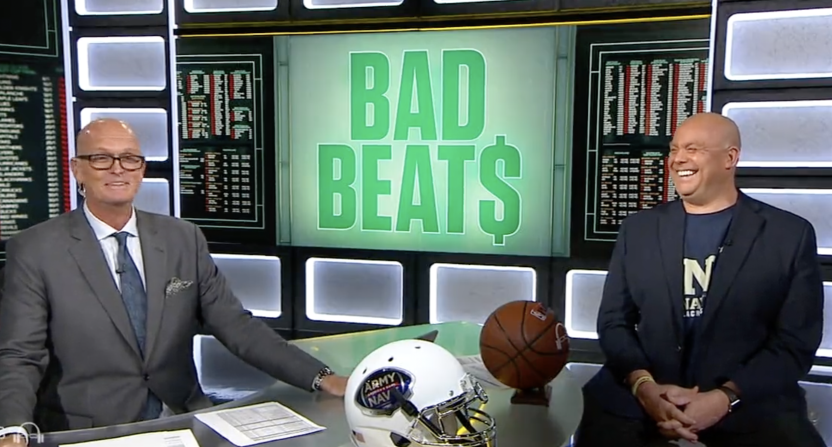 The “Bad Beats” segment during SportsCenter With Scott Van Pelt is one of the highlights of the week for many ESPN viewers, even if many of the clips would be considered lowlights.

The segment, which showcases all of the wild finishes and moments that caused sports gamblers around the country to cry out in horror as they watched their near-wins disappear, is one of the best additions to sports programming since legal sports betting gained traction nationally a few years back.

Van Pelt is joined in the segment by producer ‘Stanford Steve’ Coughlin, a sports betting analyst who also hosts his own podcast and writes a picks column for ESPN. Coughlin stopped by the Sports Illustrated Media Podcast this week to discuss the segment with Jimmy Traina, how it’s produced, and how much he enjoys seeing people react to those very bad gambling beats every week on social media.

“If you’ve been there, you’ve been there,” said Coughlin, about the reaction to the weekly segment. “It’s so funny because with social media now and the reaction you get. I’ll send a clip out when I get it from my people and a lot of people, that’s the way they see it now…The younger demo with gambling opening up everywhere, people are getting more invested. You can tell it’s their first time being a part of it and there’s nothing like it.

“Everybody remembers their worst beats more than their best wins. All the time, even in real football. You talk to coaches and players, whatever level, they all remember the losses more than the wins.”

Coughlin talked about how the segment originated on the SVP & Russillo radio show, where the germ of an idea really took off.

“In radio, we would just read a game recap story and it just didn’t have it,” said Coughlin. “People wanted to be on it and they would call and be like did you see Iona the other night? It was just kind of tough to do.”

This might be the funniest game I've ever seen featured on #BadBeats… pic.twitter.com/BSb7taApqe

The segment, which has extended over the past year to be as long as ten minutes, is put together over the course of an afternoon when the staff compiles all of the suggestions they’ve found and received from social media. Then they put everything on video, which can often run up to 30 minutes long before they whittle the highlights down to the best bad beats worth showing. As far as how things will work when the show goes live, there’s no time to rehearse beforehand so Van Pelt and he are seeing the clips for the first time the same as everyone else.

“We watch the clip in our office when we get into work,” said Coughlin. “We don’t say anything, we just watch it just to get names down. We want to try to be as correct as we can with people. This is their one time on there. We want to make sure to get their names right. Last week, we watched it one time through the clip in the office and then we went down and we did it.

“We’ve been doing them live lately because of the NFL games going long. That’s got to be our, they call it the accordion segment, where we can make it as short or long as we can. There’s no rehearsal. I just think it is over 10 years of knowing each other and the disgusting thing of he and I is most of the time, we have watched these games live.”

Whatever their process, the end result is pretty entertaining. And if you happened to be on the bad end of one of those beats, then at least you get to re-live the nightmare along with all the other viewers in your shoes.