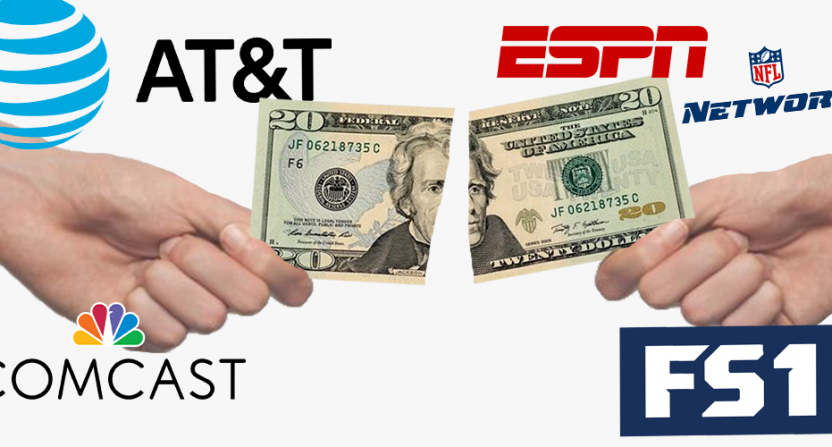 You may have heard that there is a global pandemic going on, and there isn’t much in the way of live sports on the air right now. This is bad news for just about everyone, but a new post by three analysts at a media and technology research firm is reporting (and borderline cheerleading) that the complete stoppage of live sports may result in what would be a *massive* disruption to the cable business as we know it. As the post explains:

“We believe multiple MVPDs informed ESPN that affiliate fees should not be paid starting in April 2020 because sports content is not being delivered as specified in their affiliation agreements.  The MVPDs correspondence with Disney/ESPN have apparently been completely rebuffed, even though the MVPDs indicated that all fees not paid to ESPN would be rebated directly to subscribers; helping US consumers who are hurting financially. While the next steps are unclear, it’s evident that Disney/ESPN expect to collect their $10/month from 80+ million subscribers, regardless of when sports content comes back, even if that does not occur until late summer, at best.”

This is a bit of an odd post, as it’s not quite sure where the reporting ends and the conjecture begins, with verbiage like “we believe”,”have apparently,” and “next steps unclear” all included. Regardless, the premise is worth thinking about, but first, here’s a brief refresher for those not overly savvy in some of the terminology outlined above (feel free to skip the next two paragraphs if you’re a fellow sports media nerd).

ESPN and other sports networks negotiate certain carriage fees with all cable and satellite companies. Sports channels dominate the list of priciest channels, with the average cable customer paying nearly $20 for sports channels, regardless of whether or not they watch any sports. About half of these fees go to ESPN, which includes ESPN, ESPN2, ESPNU, and potentially the likes of ESPN Classic, ACC Network, and SEC Network. The next biggest slice goes to RSNs that carry your local team’s MLB, NBA, and NHL games, followed by league owned networks like NFL Network, and then various competitors like FS1 and NBCSN.

Here's roughly what a typical cable subscriber in NYC in paying monthly for sports:

In each of these contracts sports channels have with various cable and satellite companies, they guarantee a certain amount of live games to justify the high costs of the channel. Those contracts also might stipulate what would happen should those channels lose, or potentially even add, signature programming like the NBA playoffs, Final Four, MLB playoffs, Monday Night Football, and so on. Essentially, the owners of these channels know the implications of either adding or walking away from major live events.

But with no significant live sports occurring in the entire month of April, how will the cable and satellite companies treat this unprecedented situation? The cited report believes there is momentum for cable and satellite companies to just not pay for those channels and would then refund that monthly portion of the bill back to customers. If this would be done across the board for just the various ESPN channels for April and May, that would be somewhere in the neighborhood of $1.6-$2 billion, and other networks would face a similar outcome at lower levels. That said, I’m quite skeptical that such a scenario is in play.

@DIRECTV, how the hell are you guys charging customers during the Coronavirus a regional sports fee when there aren’t even sports going on? Sounds like you’re taking advantage of the situation and someone needs to investigate this. @NBCNews @CNN @NPR pic.twitter.com/SnshSOQtPu

The first thing is that it’s still possible that all of the live events ESPN and other sports networks are contractually obligated to show may indeed be shown, but just later this year or next. Major events like the Masters and the Olympics already have new dates, so it’s not like they aren’t happening at all, but just not happening when they were supposed to. Does it make sense for your cable company to refund you $20 this month and next, but bill you $20 extra in the fall and winter when the sports schedule is double booked? That’s a whole lot of aggravation on many fronts for not that much upside, considering the cable/satellite companies would reportedly be passing those savings on to customers, only to then have to claw them back down the road in many cases.

Beyond that, the cable and satellite companies’ biggest dilemma is retaining customers who are rapidly cutting the cord in favor of cheaper alternatives like Netflix and full episodes of Iron Chef Japan (which is on YouTube for free, I recently learned). Over the past five years, about 20 million customers have cut the cord, and predictions for the coming years see continued erosion of the cable and satellite providers’ customer base.

The idea that cable and satellite companies would piss off the channel that is their biggest draw (ESPN) with a legally murky argument with no financial upside (the report says they’d refund customers the savings) seems a little ridiculous, if we’re being honest here. But let’s just say that Comcast and AT&T decided that their entire corporate image would rise from the gutter they reside in by giving $40 over to customers over the next few months. Even in this wildly optimistic scenario, it still doesn’t make much sense.

By sending customers these rebates each month, a significant chunk of the majority of cable customers who have no idea the specific economics of their cable bill would certainly revolt. “Wait, sports are $20 of my bill? I don’t want sports for any month then,” would be a logical reaction to many customers learning they’ve long been auto-enrolled in a subscription to sports they may not watch, which has ballooned in cost over the last few decades.

I'll believe it when I see it. Case with RSN fees (which are broken out) is much easier to consider than ESPN fees which are not broken out. It's easy to imagine the MVPDs not wanting to pay for ESPN. Much harder to imagine them discounting customer's monthly bills if they don't. https://t.co/xVIuwqDn5v

Also, would carriers like Comcast and AT&T, who both own RSNs across the country (while Comcast also owns NBCSN and Golf Channel), refund those fees and take money out of their own networks’ pockets? It’s one thing to stick it to ESPN or Fox, but it’s something else to stick it to…well, yourself. And furthermore, imagine the absolute fit that ESPN and Fox would throw if Comcast was refunding fees for their sports networks, but not for the Comcast-owned networks.

ESPN is perhaps a bit more shielded from such an outcome, as local sports channels are often listed under their own billing item and would a bit more of a low hanging complaint for customers looking to untether from sports costs. You can’t opt out of sports, and thus, you’d have a lot of customers pissed that they’re shackled into this bundle. Some of these newly informed customers would have to be given deals to not bolt, while others would, no matter what. I fail to see how this outcome is attractive to any cable or satellite company.

While I’d like nothing less for the cable bundle to die and would rather live in a world where I have access to channels I want but cannot get (NFL Network and Pac-12 Network) and don’t have to pay for channels I don’t want (2/3 of all my channels), the idea that the cable and satellite companies would willingly initiate something that would expedite their own demise seems extremely far fetched and should be probably taken with a large grain of salt, considering the rather gleefully pessimistic history the authors have on the cable bubble. There is perhaps an end in sight for the cable bubble, which would significantly disrupt the sports world as we know it, but I don’t think we are there yet. And once we do get there, it certainly won’t be the cable/satellite companies pushing the self destruct button.