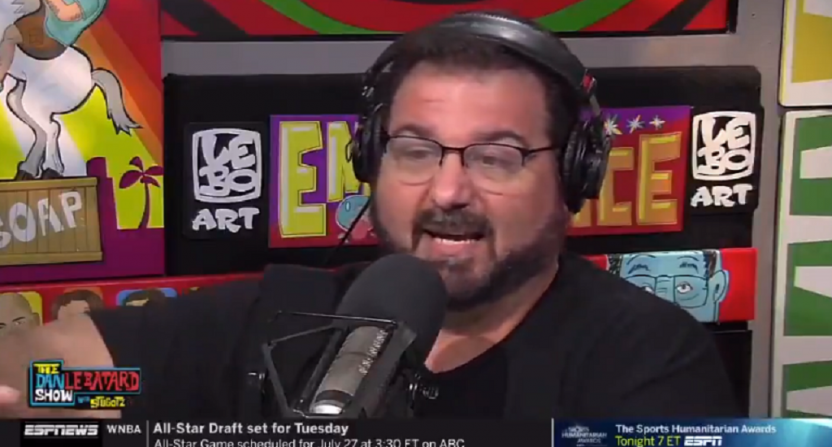 In the end, ESPN just didn’t get the show anymore.

Chalk it up to irreconcilable differences. It was probably always going end in divorce for the Miami Maverick and the worldwide leader in sports. Dan Le Batard built one of the most popular radio shows in America by poking fun at sports. ESPN built one of biggest brands in America by taking sports very, very seriously.

Seems incompatible. That’s why this breakup was inevitable. On Thursday afternoon, what we all saw coming became official: Le Batard and ESPN are parting ways. The final radio broadcast of The Dan Le Batard Show with Stugotz for the network will be January 4 and Le Batard and his father will also host Highly Questionable for the final time that day.

It will feel like the end of an era when ESPN’s last maverick signs off. Another feisty, original voice, like Bill Simmons, Jemele Hill, and Michael Smith, is gone. This departure stings more, though. Le Batard has worked in some capacity for ESPN for over two decades, but became a more prominent figure when his Miami broadcast went national in September 2013. His radio show is routinely ESPN’s most downloaded podcast.

Le Batard proudly insisted that his show wouldn’t change when it joined ESPN’s lineup. For the most part, it didn’t. That’s what eventually got in him trouble with his bosses. In hindsight, it might be more surprising that Le Batard lasted this long. When you make your living by refusing to fit into a corporate box, eventually the corporation is going to box you out.

ESPN reportedly paid Le Batard $3.5 million a year. That’s a lot of money for someone that management stopped supporting.

Le Batard is an agitator. He dared to mock LeBron James after James left Miami to return to Cleveland. Le Batard put up billboards that read “You’re Welcome LeBron; Love, Miami” with pictures of the two rings James won with the Heat. ESPN didn’t like that and suspended Le Batard. He dared to talk about Donald Trump and called ESPN’s “no politics” policy “cowardly.” ESPN didn’t like that. And while Le Batard wasn’t suspended, he did take some time off.

The Cote layoff was probably the final straw. But maybe we need to go back further. In December 2017, ESPN president John Skipper stunningly announced that he was leaving. An emotional Le Batard cried on-air, saying “This person has created everything that exists here at ESPN for us. He did it because of how he cares about minorities and their causes. So every success that we’ve had — I didn’t want to work for ESPN, I wanted to work for this man.”

Yes, Le Batard did re-sign with ESPN in 2018 after reportedly flirting with SiriusXM. The fact that he even considered this move told you that relationship was on shaky ground, post-Skipper.

Skipper got the show. What Le Batard has created is a spoof of a traditional sports program. It’s wacky and wonderful. He taught us that just because sports is a business, that didn’t mean we have to take sports so seriously. What a refreshing respite from the usual gasbags.

These radio bits were designed to get you into the circus tent. Many people enjoyed the messy-by-design style, particularly via podcasts. Of course, some people didn’t. And their comments would be greeted by the sound of Le Batard’s dad, Papi, yelling “You don’t get the show!”

That’s entertainment. And because Le Batard was so entertaining, his audience would listen up when Le Batard had something important to say. Whether it was him talking about being the son of Cuban exiles. Or him sharing stories about the plight of minorities.

Le Batard was never going to stick to sports. His strategy made him popular and rich. It also might have made him a target for ESPN executive Norby Williamson. Under Williamson, ESPN is taking sports very seriously. And that’s not fun.

What’s next for Le Batard, Stugotz and their crew, known as the Shipping Container? The show will likely continue to exist in podcast form. Or it might move to satellite radio. Wherever it goes, the Miami Maverick will continue to be a success.

There are plenty of people who still get the show, even though ESPN doesn’t.