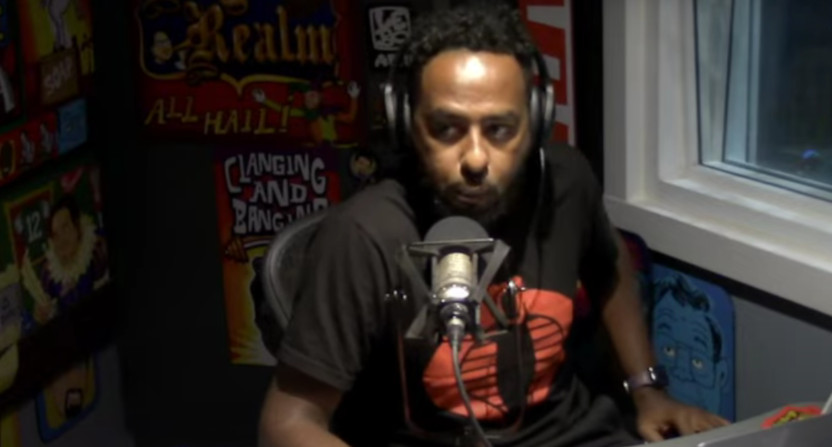 The sports media world is full of egos, and it’s full of people who don’t get along for one reason or another. When it comes to comments from some of those people about each other, though, that history is rather important context to include. When the history between the sides is not included, you get pieces with headlines like “Amin Elhassan Calls Out Woj for Putting His Foot On Black Careers at ESPN,” from Stephen Douglas at The Big Lead. That piece has a bunch of quotes from Elhassan trashing Adrian Wojnarowski for his comments about Rachel Nichols (in a NYT piece published Sunday that started much of the current Nichols-Maria Taylor conversation), and the background between the two (and Elhassan’s background with Nichols) is rather important to the context of those quotes.

As per a piece from Will Galvez at Barrett Sports Media in January about Elhassan leaving ESPN to go work with Dan Le Batard at startup Meadowlark Media, Elhassan worked at ESPN for eight years, mostly on The Jump, Highly Questionable, The Dan Le Batard Show with Stugotz, and Jalen & Jacoby. So he was there before Wojnarowski joined ESPN in 2017. And at least part of Elhassan’s feud with Wojnarowski dates back before then; we covered in 2014 how Wojnarowski (then at Yahoo and Fox Sports 1) properly credited ESPN for a LeBron scoop, how Elhassan decided that was worth not only taking a shot at Wojnarowski but also referencing his own network’s then–questionable sourcing, and how Wojnarowski responded:

@AminESPN You have 75 guys there. You really should break every story. I'd be more worried about that than me.

That’s not the only comment from Elhassan that’s come to this site’s attention over the years. In 2016, he did a perhaps-staged walkoff from an ESPN Radio show with Israel Gutierrez. For a long while, he seemed to take pride in Twitter trolling, including putting #HateHard in his bio and pinning a tweet of “Your tears are like PEDs for me.” And one particularly fine example of that trolling came from a 2017 Twitter rant turned SportsNation rant complaining about golf as a sport, which we featured in This Week In Hot Takes.

The point is that Elhassan is a guy who has long been willing to say controversial things, and a guy who’s long worked with Nichols on The Jump, and a guy who’s long seemed to have issues with Wojnarowski. And that’s very important context for his comments on Le Batard’s streaming show Tuesday. Here are those (starting around 41:06, which comes after a long defense of Nichols, which can be seen starting around the 40:00 mark):

“There’s another element to this, by the way, which is the Game of Thrones of ESPN, particularly on the NBA side, the power struggle. The moment I cackled, ladies and gentlemen, I cackled out loud reading this article, was the quote that Adrian Wojnarowski called someone else a bad teammate. Are you-can I cuss, I don’t know” (Le Batard interjects “You’ve already done that”)…”are you fucking shitting me? For real? For real? Do we want to talk about the Black careers that he put a foot on because he was threatened by? Do we want to talk about that? Do you wanna talk about the newsbreakers – with an ’S’ – of diverse background, who have rapports with players that Adrian doesn’t have. That he saw as threatening because his sources are all front office people… and assistant coaches trying to move up… and maybe a video coordinator who’s trying to get a better job somewhere else.”

These comments might be slightly interesting if Elhassan himself had personal complaints there (he does not appear to, as there’s no indication of him ever working on the breaking-news/web reporting side), or if he spelled out the particular “Black careers that [Woj]  put a foot on.” From the outside, there is not much evidence of that. And it’s very hard to envision Wojnarowski being threatened by any of the other newsbreakers ESPN has employed since his hire. (The main obvious discussion of this from the outside might be on Marc Stein’s exit around Wojnarowski’s entrance, and the role Wojnarowski may or may not have played in that. But Stein is not Black, so he is probably not who Elhassan is discussing here.)

Yes, Wojnarowski’s name winds up as a joint byline on plenty of pieces that likely originated with one of ESPN’s other NBA reporters. That’s common practice at many outlets, including on ESPN’s NFL coverage with Adam Schefter and at The Athletic with Wojnarowski’s former coworker Shams Charania. And it’s not altogether bad; that still gives credit to the key reporter, albeit in a lessened way than a solo byline, and it gives the story the credence of being vetted by a central newsbreaker like Wojnarowski or Schefter, a significant step up from some past history where one reporter assigned to one team would write one thing and a league reporter would then have to contradict it. (This is never a good thing, as Sports Illustrated found out in 2019.)

But sure, we can have a discussion of joint bylines and if they’re the best practice. But it’s a big reach from that to “the Black careers that he put a foot on because he was threatened by” and “the newsbreakers – with an ’S’ – of diverse background, who have rapports with players that Adrian doesn’t have. That he saw as threatening.” There’s no evidence provided of the particular people that Wojnarowski supposedly impacted negatively this way. And without specificity to those claims, they don’t mean a whole lot. And it’s quite something to lob out these kinds of claims of racist behavior by a prominent figure without supporting evidence.

And that’s disappointing here, both when it comes to someone like Le Batard who has the original platform here and who extends it to Elhassan, and then when it comes to people restating Elhassan’s comments uncritically. There isn’t much evidence that Elhassan ever broke NBA news, or worked with Wojnarowski on breaking news; he instead appeared on ESPN studio programs to offer takes. So, at best, his comments here seem to be secondhand.

And Elhassan’s comments are so incredibly non-specific. He doesn’t name names of those who Wojnarowski seemingly “put a foot on,” and he doesn’t offer any evidence to support that. If he wants to go at Wojnarowski with accusations of suppressing people from “diverse backgrounds,” and if he wants to defend Nichols, that’s certainly something he can do. But his remarks would be worth taking more seriously if they came with any level of direct allegations or supporting evidence. Instead, they’re about him impugning Wojnarowski in general with some pretty serious allegations, but not offering much to support that.