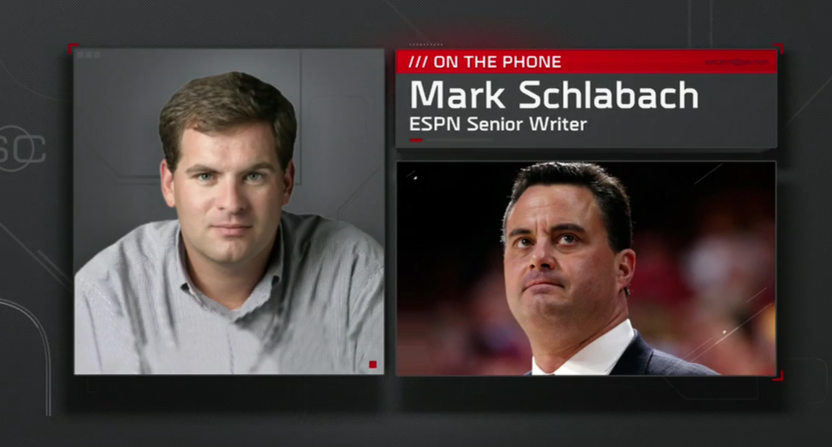 It’s an unnerving trend — not just in America, but across the world. If a media outlet reports something unflattering about a subject, that subject can merely scream “FAKE NEWS” and their supporters will repeat it until they believe it, regardless of actual tangible things like fact and truth.

The “fake news” mantra has caught on so rapidly in politics that it has further corroded and destroyed any sense of discourse we once had. It’s moved us deeper into a disturbingly partisan “post-truth” world where the only thing that matters is which side you’re on. And it’s made reporting all the more challenging, greatly amplifying the pressure to get every single detail completely accurate.

Arizona head basketball coach Sean Miller didn’t use the phrase “fake news” in his press conference on Thursday. But he did go on the offensive against ESPN after denying a report from Mark Schlabach that he discussed paying $100,000 with an intermediary to secure the recruitment of Deandre Ayton. The Miller story was by far the biggest bombshell in a wave of revelations coming to light around college basketball in the wake of an extensive FBI investigation into illicit payments.

Miller insisted that he did nothing wrong and has the public support of at least one of Arizona’s regents in questioning ESPN’s journalistic practices in reporting the story. The categorical denial could be Miller’s last gamble in an effort to save his job at Arizona… or it could be the truth. Or maybe even somewhere in between.

The fact that it’s a question at all at this point is what is most troubling for ESPN. The network has not done themselves any favors with this story from the beginning. There have been many questions about the timeline reported by ESPN, corrections, and corrections to the corrections.

All of ESPN’s back and forths have created the one thing that is most troublesome for any investigative reporting: the seed of doubt.

It all comes down to when the alleged call between Miller and Christian Dawkins took place. Schlabach and ESPN originally reported that it came to light during the FBI investigation. Initially, Schlabach said that it took place in 2017 during an audio recording for SportsCenter. Then ESPN corrected the date to say that it came in 2016. Then they corrected the correction to say that no, indeed the 2017 date was correct.

Below are the two corrections ESPN has issued about their reporting on the story with the first coming on February 25th and the second on March 1st:

Why is the timeline so important? Because according to a different report from 24/7 Sports, the FBI would have tapped Dawkins’ phone in 2017. But Ayton committed in 2016. Additional media outlets are openly questioning ESPN’s reporting. Sports Illustrated has their own piece on the growing controversy that says “details of a wiretapped phone call involving Miller were inaccurately reported” by ESPN. And an Arizona Daily Star columnist has even suggested that ESPN may even have the identity of the player in question wrong.

It’s easy to see that something definitely doesn’t add up. And the fact that it comes after an ESPNU play-by-play man incorrectly reported that Miller was fired by Arizona doesn’t help the network either.

In response to Miller’s press conference on Thursday, Schlabach appeared once again on SportsCenter with Michael Smith to say that he stands by what he reported and said, “I have no reason to believe that anything in that article is inaccurate.”

At a deeper level, there have to be serious questions asked about how ESPN has operated through the reporting of this story. How solid were Schlabach’s sources? Are there other FBI tapes out there from 2016? Do they actually have Miller on tape? (If they did, one would think that would be revealed to remove all doubt from the equation.) How was this story vetted?

Furthermore, why did ESPN shift the date from 2017 to 2016 and then back again? Was it a panicked reaction to the growing questions surrounding the reporting? Did they do more work to try to shore up their sources? And if that happened after the fact, why wasn’t it done in the first place to make the story air tight?

With a story this explosive, it’s of paramount importance to get it right. That shouldn’t be an earth-shattering development for any news organization. But with questions over everything still lingering, it leaves an opening for fans and observers to throw the entire story out rather than try to decipher which corrected version they should believe. And it leaves an opening to believe a firm denial from Sean Miller instead of reporting from ESPN that always seems to be changing.

In the era of “fake news,” those are openings that any media organization simply cannot afford.