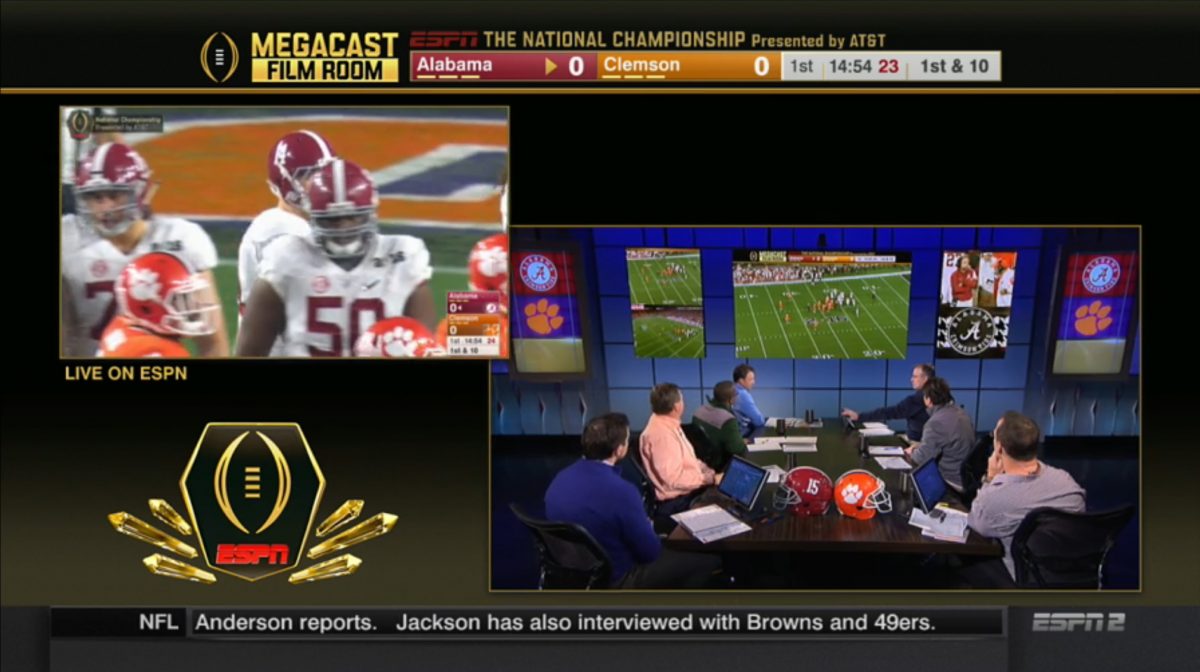 This week baseball fans embraced the Statcast offered by ESPN2 for the National League Wild Card game between the Colorado Rockies and the Chicago Cubs. The idea of the Statcast isn’t new: MLB Network has been doing it for years. What was notable was just how popular it was, especially compared to the regular broadcast on ESPN.

The Statcast with Jason Benetti, Mike Petriello, and Eduardo Perez was favored by an almost 2-1 margin in our Twitter poll which featured a decent sample size of over 3,000 votes.

The concept of alternative broadcasts is something that has been slowly on the rise in sports broadcasting in recent times. ESPN has led the way with a number of different viewing options for sports fans but others have gotten in on the act as well. Here’s a list of some of the alternate feeds we’ve seen over the last few years.

* ESPN broke ground in this area with the BCS Megacast in 2014 when it offered more than eight different feeds for the national championship game in college football across a variety of television and streaming platforms. ESPN has only built out the megacast from there, making it an annual tradition for the end of the college football season.

* In the midst of about 742 ways in which to consume the NFL Draft, ESPN2 used the College GameDay crew to compliment their main telecast with a college-focused edition.

* For Game 2 of the NBA’s Eastern Conference Finals, the network offered a Full Court Press feed featuring Jay Bilas, Adrian Wojnarowski, and Cassidy Hubbarth amongst others.

* Turner Sports has perhaps most notably offered Teamcasts for the Final Four featuring a homer broadcast for each game of the national semifinals and championship game for college basketball. These broadcasts have presented a wide spectrum of voices with people ranging from Dr. Sanjay Gupta to Rob Riggle participating in this year’s version.

* Amazon has featured different announcers for their broadcasts of Thursday Night Football. The company has a UK feed featuring the familiar pairing of Derek Rae and Tommy Smyth, who called Champions League games together on ESPN for years. This year, Amazon will have an all-female team with Andrea Kremer and Hannah Storm in the broadcast booth.

While these alternate feeds are mainly limited to rightsholders, we’ve also seen a number of outlets offer second screen experiences for big sporting events hoping to grab some of the invested audience by trying to reach fans on their laptop or tablet while they watch a game on the big screen.

The proliferation of alternate broadcasts really took hold with the Megacast, but it’s only grown since then. But is it something that really makes sense for sports broadcasts? For starters, you’re only competing with yourself and dividing up your own audience. It’s unlikely that someone new is going to watch a playoff baseball game only because you’re focusing on stats or using biased announcers. And then there’s the cost factor, which surely must increase when you’re doubling or tripling (or more) the crews that are working the same game.

The fascinating part of this is that the ratings really aren’t close when it comes to alternate feeds. For the BCS Megacast, about 95% of viewers watched the game on ESPN compared to all the other television feeds combined. Even though this week’s Statcast for the MLB Wild Card Game was well received, audiences stayed with the main feed on ESPN by an almost 10-1 margin – ESPN had over 6 million viewers while ESPN2 had just over 600,000 viewers.

While the numbers may make an argument to the contrary, there’s still a place for alternate feeds in sports broadcasting, especially aimed at dedicated sports fans. For so many sports broadcasts, the target seems to be reaching out to casual viewers. Many times, this can be at the expense of committed fans (see most soccer broadcasts on American television before 2008).

In an age where there are more viewing options than ever, sports networks have to do all they can to reach out to fans and continue winning them over. And providing those options is really what this is all about. Our attention spans are shorter than ever; it’s likely that you’ll be flipping channels or refreshing your Twitter timeline or checking Facebook during a game. It’s much easier as a sports fan to get engaged with a more focused alternate feed, though. Some of these work better than others; the Turner Teamcasts have a pretty narrow appeal, by default. But something like the Coaches Film Foom is fascinating because you get to learn so much about the game that you simply can’t get from a normal telecast.

It’s obvious that the main feed is going to get exponentially more viewers than any alternate feed. To make them more noteworthy, you have to break decades upon decades of ingrained viewing habits. Alternate feeds receive a fraction of the promotion and are usually always on networks that aren’t as prominent or as widely distributed.

But this doesn’t mean the broadcasts are frivolous endeavors.

Yes, the Statcast or Coaches Film Room may not be for casuals, but they do serve dedicated sports fans who want to have a more fulfilling broadcast compared to what we’ve experienced for decades. There should be nothing wrong with wanting something a little more in-depth and meaningful as a viewing experience. If fans are happy with the Statcast and ratings are up overall, then that should be a win-win for ESPN and fans. That customer satisfaction makes it worth it, as fans will keep coming back for more if they have a good experience on an alternate feed. Sure, it’s not something that ESPN or any other network can go to on a regular basis, but it is an olive branch to hardcore sports fans that should be valued by everyone.