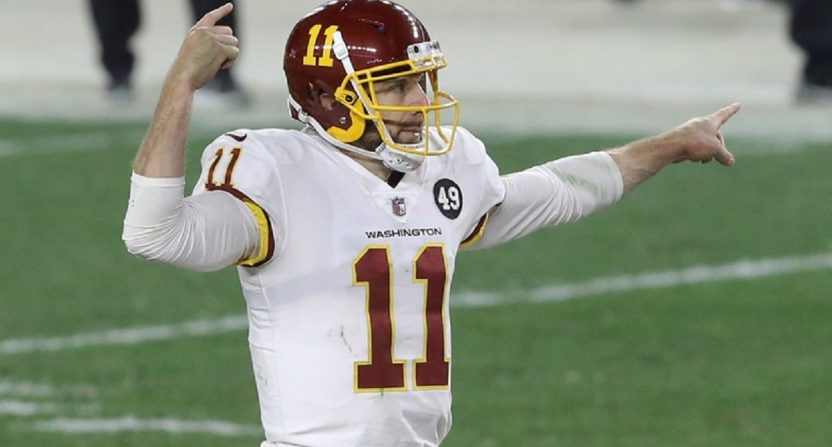 Alex Smith is heading to ESPN. As we discussed in June, Smith (seen above in a December 2020 game) was drawing interest from CBS and Fox for game analyst work at that time, while ESPN and NFL Network were pursuing him for studio work. As Andrew Marchand of The New York Post (who previously reported the details on multiple networks’ interest in Smith back in June) wrote Wednesday, though, CBS and Fox ultimately went in other directions, leading to Smith signing with ESPN as a part-time studio analyst across various network shows. Here’s more on that from Marchand:

The recently retired Alex Smith has signed on to be an analyst across ESPN NFL shows. For his rookie TV season, Smith will just be dipping his toes in the analyst game as opposed to taking on a full-time role.

He will appear on shows like “Monday Night NFL Countdown”, among others. However, if both sides like how it goes, it could lead to a larger commitment.

Smith had tryouts to become a Sunday game analyst for both Fox and CBS. Fox decided to sign Mark Sanchez, while CBS will not replace Rich Gannon.

Smith joins a deep cast of NFL analysts at ESPN, and we’ll see just how often he’s used. He’s had an interesting path to this point. He was drafted first overall by the San Francisco 49ers in 2005 and played in 16 NFL seasons, spending 2005–2012 with the 49ers, then 2013-17 with the Kansas City Chiefs, and then 2018-20 with Washington. Washington released him this spring, leading to this move to the media.

Smith’s first season with Washington saw him suffer a devastating and life-threatening leg injury in November 2018 that could have resulted in amputation. But he pulled off an impressive comeback despite 17 surgeries, returning to game action in October 2020 after Kyle Allen got hurt. Smith’s comeback was chronicled in 2020 E:60 special “Project 11.” Now, he’ll be joining the network that put out that special.