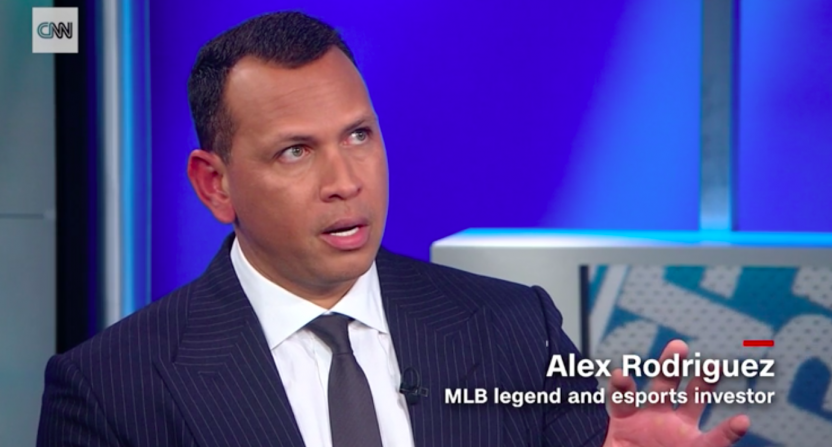 Every generation thinks the next generation has no idea what they’re doing. At least, that’s what it always feels like. Modernity and evolving technologies are always hard for older generations to understand. They got by just fine without whatever newfangled contraption the kids today play with, so clearly, it must be unnecessary and harmful.

That’s certainly how older generations look at video games. What was once a curiosity and later fun hobby has now become a full-blown industry unto itself. Video game releases can have a bigger financial impact than the latest theatrical blockbuster. And esports, the competitive arm of the video game world, is poised to be a billion-dollar industry very soon.

All of which is to say that it’s understandable that a guy like Alex Rodriguez, a natural-born athlete who dedicated most of his life to playing baseball and being physically active, wouldn’t quite understand the world of esports, what it exactly is, and how it’s different than just playing a video game. During Sunday Night Baseball’s broadcast of the 2019 Little League Classic between the Cubs and Pirates, ARod attempted to tie in physical fitness and video games and came off a little confused.

“This is the first generation of kids that will not outlive their parents.”

While a popular notion that has been echoed by many people, that’s not actually proven to be true. According to the BBC, while it’s true that the number of people who are obese now is higher than it has been before, the risk of dying from heart attacks and strokes is actually lower overall. In fact, some experts believe that the current younger generation will live longer than previous ones despite any obesity issues.

“…to think, there’s more kids today playing esports than physical sports, it’s something as parents we have to really promote going outside.”

It sounds like ARod meant to say “video games” and not “esports” here (and he’ll probably hear about it from his bosses afterward). Either way, it’s hard to find specific data to back up that statement. Yes, kids are playing a lot of video games. Yes, playing video games too much can have negative impacts. But the evidence that kids are playing more video games than physical sports, or that the two are linked, seems anecdotal. Plus, there are a lot of positives that can come from playing video games; skills and social habits that parents would like to see their kids develop no matter what.

“When we grew up, there wasn’t…there was Atari, but you had to go outside and play for…four-five hours…”

At 44 years old, ARod is right that there weren’t a lot of video game options when he was a kid. But they did exist and it wasn’t too long after his childhood when they became a standard part of many adolescents’ lives. As for the rule about going outside before you got to play Atari, that sounds like something they Rodriguez family enacted. It certainly wasn’t a law.

“Kids today, too many times, choose to stay inside and play video games.”

No word on whether or not the ESPN employee has checked out ESPN’s dedicated esports site or if he’s aware of ESPN’s esports coverage throughout the year or that Disney signed a multi-year deal to broadcast Overwatch League across ESPN, ABC, and other properties last year. That’s certainly not gonna get the kids outside any quicker.

The funniest part of ARod’s diatribe is that if he thinks esports is such a terrible thing for today’s youth, he probably shouldn’t have invested in NRG eSports back in 2017 (along with wife J-Lo). And if he has any real concerns about the health and competitiveness of esports participants, he should have consulted himself from this 2018 interview with SI:

One of the things I’m excited about is mentorship. These kids are highly competitive, they’re working long hours…And then physically and mentally, these guys are going to go through ups and downs.