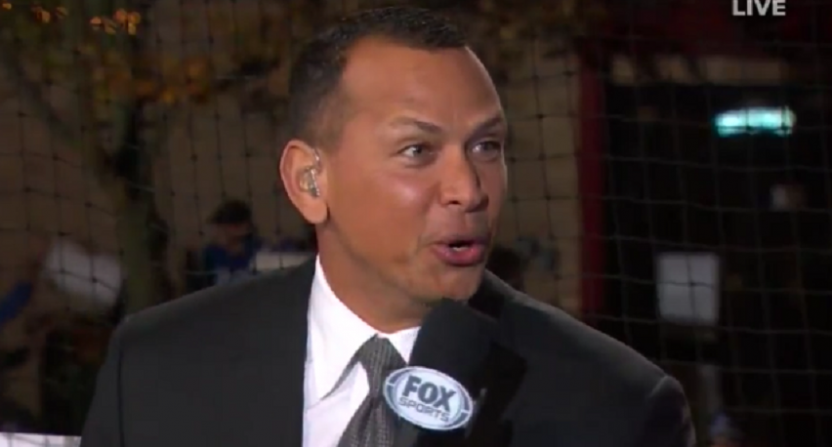 In the baseball broadcasting world, it evoked the Miami Heat acquiring LeBron James and Chris Bosh in 2010.

ESPN opened a lot of eyes in sports media on Tuesday when it announced that Matt Vasgersian and Alex Rodriguez would be joining Jessica Mendoza and Buster Olney on Sunday Night Baseball for the 2018 season. And during a media conference call on Friday, Vasgersian, Rodriguez and ESPN Senior Vice President of Events and Studio Production Stephanie Druley discussed how the duo was brought to the network and the pressure they face now headlining baseball’s signature weekly baseball broadcast.

“From our side, wholeheartedly, it was pretty simple,” Druley said, noting that it had nothing to do with the ongoing Disney-Fox merger discussions. “We had an interest and Alex had a strong desire and he has a great relationship at Fox. Some conversations were had, and some conversations were had with MLB and with MLB Network about Matt, and it was not a giant hill to climb. It was a pretty easy thing to get done.”

Druley said that ESPN has talent-share agreements with other networks and broadcasters, naming Beth Mowins, Jay Bilas, and Curtis Strange as examples. For Vasgersian, it was a series of meetings and discussions with producers and executives, and a getting-to-know-you process between network and talent.

“I think the folks at ESPN wanted to know who I was and how I liked to work,” Vasgersian told Awful Announcing. “You can turn on the TV and watch any of us and kind of know what you’re gonna get from an on-air standpoint. But I think people wanted to know who I was because I was kind of coming to the party as a virtual unknown in Bristol. I don’t really have a lot of connections there, so to speak.”

There was a lot of uncertainty and intrigue in broadcasting circles over the course of the offseason surrounding Sunday Night Baseball, according to Vasgersian, just the third play-by-play announcer in SNB’s history after Jon Miller and Dan Shulman.

“It was certainly on everybody’s radar when Dan announced his intention to not return to Sunday Night Baseball,” Vasgersian said. “And I think likewise, when the Yankees chose Aaron Boone to manage them, I’m sure there was a big group of former players turned analyst, or players about to turn analyst who took notice of that.”

As for the pressure of calling Sunday Night Baseball, Vasgersian said he’s made so many on-air mistakes over the course of his long career that it’s not as much pressure as people may think.

“I’ve botched it so many times on the air, I can’t even keep track. And until you fail a little bit, you don’t have the confidence to succeed,” Vasgersian said. “Yeah, there are more eyeballs on us here on Sunday night, for sure. But the minute you let that get in the way of you calling a game, is when you’re gonna whiff. We’ve all done that before, I think, in little bits and pieces. So I don’t know that I feel the pressure of the chair so much, but I also know we’ll have tremendous support at ESPN and there’s no way we’ll go on for our first show without being completely ready to roll.”

Despite an illustrious, and obviously complicated, playing career, Rodriguez is a neophyte in the broadcast booth. He said he called three games with Fox last year, one with Joe Buck and two with Kevin Burkhardt, so there could be a little more pressure for A-Rod early on at ESPN.

“I’ve got a Master’s at screwing up, so I’m certainly ready for that,” Rodriguez told Awful Announcing. “I think it’s just like getting your at bats.”

Rodriguez said he’s a big proponent of the 10,000 hours to mastery theory as originally written by Malcolm Gladwell, and said it takes at least 2,500 at bats— roughly five seasons— to truly have a handle on how good or bad a baseball player will be.

“I almost feel the same way about broadcasting,” Rodriguez said. “Hopefully for our sake, it doesn’t take me 2,500 hours or games, but I think there is a certain amount of repetition that goes in, comfort level and kind of really getting to know Matt and Jess, their superpowers and their strengths and where they like to go.”

Rodriguez then curiously compared a baseball broadcast team to a basketball offense.

“It’s like a fastbreak, and Matt’s the point guard. He’s like Magic Johnson running point,” Rodriguez said, likely marking the first and possibly last time that Vasgersian will be compared to Magic Johnson, “and I think his job is to set up Jessica and I as well as possible, and hopefully we can finish.”

The newly-formed quartet of Vasgersian, Rodriguez, Mendoza, and Olney will have spring training, and potentially some practice games, before the season starts to get familiar with one another and get some flow and cohesion into their broadcasts. Until then, all eyes will be on the new Sunday Night Baseball crew, the newest superteam in the sports media landscape.