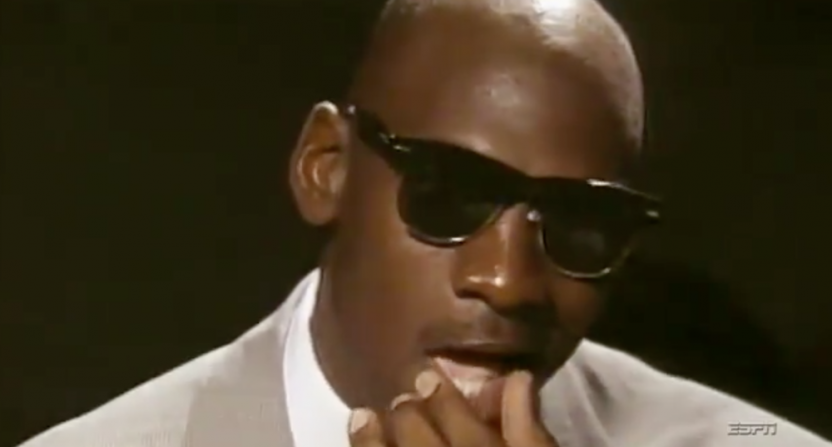 One of the more controversial subplots to Michael Jordan’s legendary career has been his gambling habit, an interest that may have developed into full-blown addiction in the early 1990s.

Jordan’s obsession received intense scrutiny during the 1993 Eastern Conference Finals when some blamed his subpar performance in Game 2 (shooting 12-for-32, though he scored 36 points) on a late-night trip to an Atlantic City casino. Was Jordan’s obsession a manifestation of the competitiveness that made him an all-time athletic great? Or did he truly have a gambling problem?

The inquiries were so pervasive, becoming so overwhelming during the drive for a third consecutive NBA championship, that Jordan refused to speak with the media for two weeks. But he finally broke his silence before Game 1 of the NBA Finals, calling on NBC reporter Ahmad Rashad for an interview that Jordan hoped would definitively settle the issue.

Yet Jordan’s defensiveness throughout the conversation and his insistence on wearing sunglasses during the interview still raised suspicion, creating the impression that the superstar had something to hide.

With the gambling storyline a key plot to the sixth episode of ESPN’s The Last Dance and Jordan’s interview receiving new attention, Rashad spoke to the Los Angeles Times‘ Greg Braxton about the circumstances leading up to the televised conversation with Jordan.

Rashad was frequently criticized for his cozy relationship with Jordan that developed over years of talking to him for NBC’s NBA coverage and wanted to make sure he wouldn’t be viewed as being soft with his questions. He asked NBC Sports chairman Dick Ebersol to come up with an objective line of questioning for the interview.

Rashad notified Dick Ebersol, who at the time was the chairman of NBC Sports. “I said to Dick, ‘Here’s what I want you to do for me. I want you to give me the questions. You give me what you want out of this interview. That way it won’t look like I’m taking it easy on my friend.’”

Rashad asked Jordan to take off the sunglasses before cameras began to roll, but Jordan refused and just wanted to get the interview finished.

Viewers and critics didn’t know that Ebersol wrote up the questions for the interview, so the perception remained that Rashad took it easy on his buddy. Rashad didn’t reveal Ebersol’s role in the conversation either, perhaps concerned that it would only further raise doubts about his ability to objectively cover Jordan.

If the intention was to end innuendo and speculation about his gambling habit, the interview likely didn’t accomplish that objective. And it certainly didn’t redeem Rashad’s reputation as a journalist, of which he was obviously aware since he sought outside help for questions to ask Jordan.

But the interview is a piece of the era, chronicling a dubious phase of Jordan’s career as he was chasing greatness under an increasingly harsh spotlight.