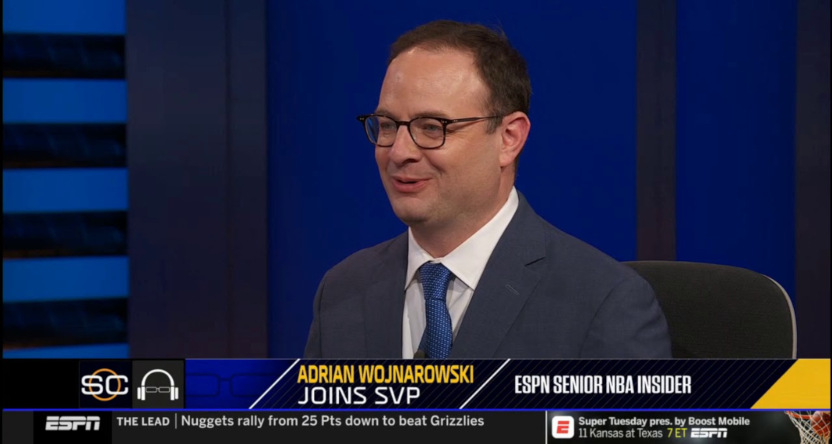 Josh Hawley, a Republican senator from Missouri, took to Twitter Friday to complain about a response he received to a press release he sent to ESPN’s Adrian Wojnarowski. This started when Hawley tweeted a letter to NBA commissioner Adam Silver Friday questioning the NBA’s approved social justice messages for player jerseys and particularly saying that pro-military and pro-police slogans like “Support our troops” and “Back the blue,” plus “Free Hong Kong,” should have been included. Here’s that tweet:

If @NBA is going to put social cause statements on uniforms, why not “Support our Troops” or “Back the Blue”? Or given how much $$ @nba makes in #China, how about “Free Hong Kong”! Today I wrote to Adam Silver to ask for answers pic.twitter.com/PthYR4OxmE

Hawley also apparently blasted this out in a press release, and one of the people his press email account sent it to was ESPN’s Adrian Wojnarowski. That would appear to be an unsolicited e-mail; it seems unlikely Wojnarowksi has subscribed to releases from the junior senator for Missouri. Wojnarowski appears to have responded to that e-mail with a “Fuck you,” which Hawley then took to Twitter to complain about:

As per Ben Strauss of The Washington Post, ESPN’s comment so far is that they’re “looking into it”:

I asked ESPN about the Woj/Hawley email. Spokesman said it appears to be real and ESPN is looking into it.

Update: Wojnarowski and ESPN both tweeted out statements:

Hawley has been playing this up on Twitter with retweets of those who agree with his criticisms of ESPN and Wojnarowski.

This fits into a larger context of criticisms of ESPN over politics, something that president Jimmy Pitaro (in that role since March 2018) has repeatedly sought to minimize. Their official policy (which dates back to 2017, pre-Pitaro) for social media is “Communication with producers and editors must take place prior to commentary on any political or social issues,” although that’s widely ignored, and they’ve repeatedly cautioned employees about airing opinions “on the news of the day,” although that’s also not often enforced. And Dan Le Batard’s on-air remarks on “Send her back” comments about Congresswoman Ilhan Omar at a rally held by President Donald Trump led to him being sent to Bristol to meet with Pitaro, but not receiving a suspension.

ESPN’s specific social media and on-air guidelines would not apply here, as Wojnarowski’s response didn’t come in either of those forums. It came in an email response to a press release he was sent, which Hawley then tweeted. But there are potentially corporate e-mail guidelines that could come into play, and ESPN’s statement here indicates they don’t condone this.