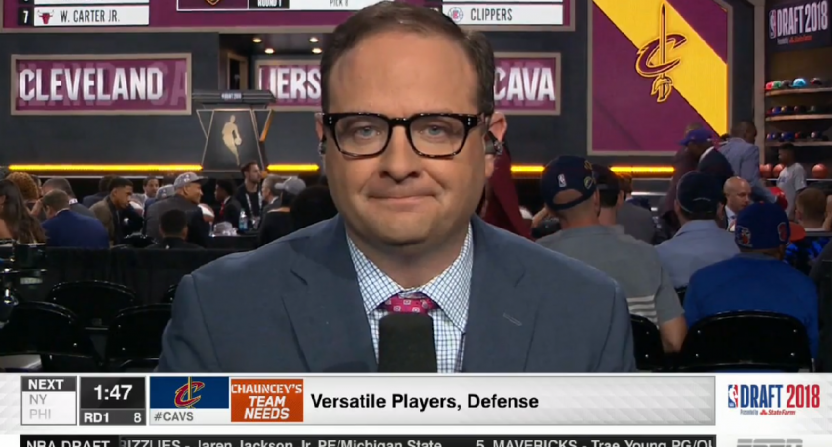 Ever since Twitter became a major source of sports news, it’s wreaked havoc with the NFL and NBA Drafts as live television events. For the last several years, intrepid reporters at multiple outlets have been at least a step or two ahead of the action as it plays out on television, tweeting out the picks long before the television coverage.

Those rapid spoilers have led the networks who cover the draft (chiefly ESPN) to instruct their reporters not to join the reporting race with others from competing outlets who may be tipping picks on Twitter ahead of when the picks are actually announced on the broadcast itself.

In the early days of tipping picks, things actually got pretty heated, as fans were upset with reporters for supposedly spoiling their viewing experience. Now it’s pretty much common knowledge that if you don’t want your draft party spoiled, you better stay off Twitter. And at least for this year’s NBA Draft, even the networks that televise the event and in the past have tried to preserve the illusion of suspense seem to have given in.

ESPN has long prevented NFL reporters from tipping picks for the NFL Draft and last year with insider Adrian Wojnarowski on board had the same policy in place for the NBA Draft. While at Yahoo Sports, Woj was famously multiple picks ahead of the television coverage on draft night at times.

However, during last year’s NBA Draft former ESPN reporter Marc Stein began tipping picks on Twitter and Woj quickly jumped into the fray. Although he didn’t technically tip picks, he found every creative way imaginable to do everything but tip.

Chicago is zeroing in on Wendell Carter with the seventh overall pick, league sources tell ESPN.

Source: The Lakers are unlikely to resist Mo Wagner with the 25th pick.

Source: The Sixers are enamored with Landry Shamut at the 26th pick.

Honestly, watching Woj work his way through his pick tipping thesaurus was actually more entertaining than the draft itself.

This year, though, Wojnarowski will be freer to report the draft picks as he gets them, with ESPN and the NBA seemingly accepting the reality that they can’t contain the #Wojbombs that will drop on draft night. Via the New York Post:

For the NBA Draft, ESPN insider Adrian Wojnarowski will be “lasered” in on tipping the draft choices on Twitter before they are on TV.

In other words, Wojnarowski, with a wink, will attempt to put out the picks before NBA commissioner Adam Silver announces them. This plan is a change from what ESPN and NBA executives agreed to for last year’s draft.

Prior to the 2018 selection show, the NBA and its league partners, including ESPN, said publicly that its reporters would not foretell the choices before they were on TV.

If anything, it’s proof of just how great Woj is at his job that he basically forced ESPN to change its policy because of his ability to report news on Twitter. And really, it makes sense for ESPN to just let him be himself and report the news.

In an ideal world, ESPN would be able to protect the drama that is built into the draft broadcast, but it’s just not realistic. If the picks are going to be out there, why not let their top reporter be the person that fans on Twitter will be getting their news from instead of ceding that ground to a competitor?

It would be fun if Woj kept the wordplay game going during the draft just for the banter. If Jay Bilas did the same thing for “wingspan” we may have the most entertaining draft night in recent memory.