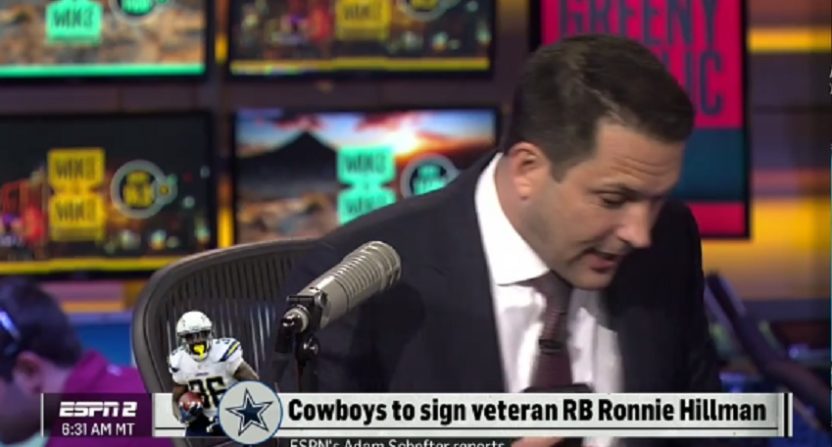 ESPN and its viewers know that having Adam Schefter on set doesn’t mean that he’s going to stay on camera. The man’s phone is always buzzing with calls and texts to give him the latest NFL information.

On the first day of NFL free agency back in March, Schefter took a call live on the air during NFL Insiders and left the studio desk to get the information he needed. Talk amongst yourselves, NFL analysts, there is insider stuff to report!

With NFL training camps opening, the slow part of the offseason is now finished. That means Schefter is taking calls again. (Although he’s always taking calls, right?) So when he stopped by Mike & Mike, he didn’t have time to jabber with Greeny and Golic once that phone started buzzing.

Yeah, yeah, yeah — Schefter reported that the Dallas Cowboys are signing running back Ronnie Hillman, which likely indicates that the team is worried about the NFL possibly suspending Ezekiel Elliott for recent behavior including domestic violence allegations and texts regarding drug tests.

But that was apparently already old news by the time Schefter took his seat on the Mike & Mike set. He had to take a call!

Schefter returned to the set five minutes later and naturally, Greenberg and Golic wanted to know what was so important that he had to take the call. Was there big news in the NFL? Maybe a trade or something like that? That stuff doesn’t usually happen at the beginning of training camp, but Golic speculated that maybe he had some NBA information since Schefter was reporting on pro basketball during the summer.

But apparently, it was all a false alarm. Schefter sheepishly admitted that a general manager played a prank on him by saying he was making a big trade involving two star players. Suddenly, Schefter’s phone lit up and he had to address whatever was supposedly happening. Whoever this NFL GM is, it’s amusing to know that maybe he’s watching Mike & Mike and trying to make Schefter leave the set with a well-timed call or text.

Maybe executives in other sports can try the same thing and get Adrian Wojnarowski, Brian Windhorst or Buster Olney to jump off set for a phony trade. (The rest of us just have to watch out for fake accounts on Twitter.) This could be the thing that boosts ratings for SportsCenter and other studio shows. Will one of ESPN’s insiders have to jump off set to take a call? John Skipper may consider pretending to be a NFL, NBA or MLB general manager to provide some spontaneous fun.