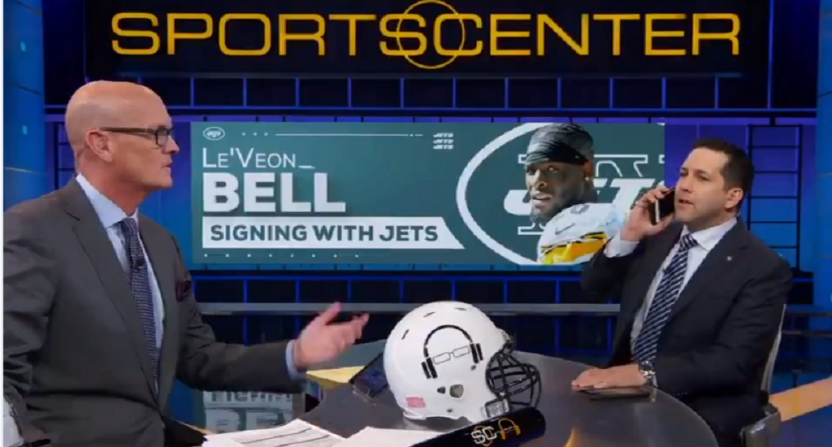 After sitting out the 2018 NFL season with the Pittsburgh Steelers, star running back Le’Veon Bell agreed to a four-year deal with the New York Jets on Tuesday night (well, technically Wednesday morning on the east coast).

Schefter appeared on SportsCenter with Scott Van Pelt, and Schefter and Van Pelt put a pause on their conversation- so that Schefter could answer a phone call on live television to get the details of Bell’s contract with the Jets.

After 40 seconds of a phone call and tweeting, Schefter said, “Okay, here we go… Le’Veon Bell… four years, $52.5 million with the Jets.”

"Hold on one second, I got to take this." ?@AdamSchefter live on @notthefakeSVP breaking Le’Veon Bell news. pic.twitter.com/vZyWmK7ane

Here’s @AdamSchefter finding out about Le’Veon Bell’s deal to the Jets live on @notthefakeSVP and deciding to tweet before saying it on TV. pic.twitter.com/rANuoNRqVy

Le’Veon Bell’s four-year deal with the New York Jets has a max value of $61 million and includes $35 million guaranteed, per source.

Schefter is a busy man, and he/ESPN like to frequently remind viewers of this (you can see more examples of him answering phone calls on live television here, here, and here).

Oh, and Schefter wasn’t the only NFL reporter to do this live on ESPN this week. Josina Anderson took a phone call to break the news of Landon Collins signing with the Washington Redskins on a Monday edition of SportsCenter.