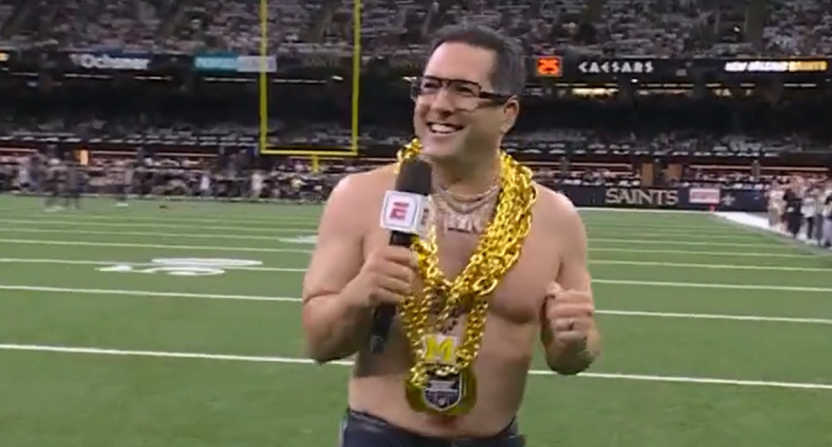 Back in November, Adam Schefter went on television shirtless and did some weird dance while wearing chains around his neck.

Against long odds, Schefter somehow managed to debase himself even further over the weekend. Continuing a long trend of poor judgment and water-carrying for various NFL figures who don’t need his help, Schefter wrote a Deshaun Watson puff piece that went up late Saturday night.

Not coincidentally, Watson returned from his suspension for violating the league’s personal conduct policy in the wake of being accused of sexual assault by dozens of women.

The piece is one that anyone could have seen coming from Schefter, full of pure image rehab and a general lack of skepticism as to the narrative he’s more than willing to spread at the behest of whoever in Watson’s camp wants him to do so. The thesis is that Watson’s treatment program has been successful. This reporting comes, of course, from anonymous sources who provide zero real details as to just how Watson has changed for the better.

“He’s been progressing well and he wants to continue with it, and they feel it’s helping him,” one source connected to Watson’s treatment program said. “It’s just sort of ongoing as needed, and it’ll be ongoing until it’s not needed anymore. And I think it’s given him a lot of help and support. But this could take a while.”

The program is considered confidential, and Watson did not shed light on his treatment last week. He declined to address his treatment during his news conference last week leading up to his return to play, but as one source pointed out, his “clinician said he shouldn’t comment on his treatment program and he’s not allowed to get into his legal situation.”

It’s hard to read that second quote without coming to the conclusion that Schefter included it to try and help shield Watson from blowback with regard to how he’s handled everything so far. The idea that Watson’s treatment program is confidential EXCEPT for the information his camp wants out there to try and smooth this over publicly is such transparent image laundering that even someone as ethically unscrupulous as Adam Schefter should have thought twice.

Instead, Schefter followed that up with this paragraph, seemingly without irony undercutting the entire premise of someone who has truly worked to make real-life changes:

Watson, who wasn’t charged criminally, has repeatedly denied any wrongdoing and said people haven’t been interested in hearing his side of the story. He declined to go into any questions outside of football this past week, and his Browns debut will come exactly 700 days since he last played in a regular-season game with the Texans on Jan. 3, 2021.

Nothing says “I realize I have to change” like being unwilling to admit wrongdoing!

Since I know most people aren’t going to actually read this article, I’ll point out there’s no description of what his program is, what he’s doing in the program, or one example of how he’s made progress. Also, the sourcing is vague. https://t.co/AFYf6f9PgU

Adam Schefter has become the go-to for coverage like this thanks to his willful ignorance when it comes to covering stories involving sexual assault or domestic violence. Last November we had his coverage of Dalvin Cook for which he was excoriated wildly. It’s been a pattern since to the point that some of his ESPN colleagues anonymously spoke out against his work.

Schefter even had to issue a semi-retraction after tweeting out what amounted to an exoneration of Watson with blatant disregard for how the legal system works.

This was a poorly worded tweet that deserves a proper response. It was intended to provide insight into the strategy of Watson’s legal team from its POV. I should have been clearer. As legal experts have explained, a lack of an indictment alone does not mean someone is innocent.

He admits in his own clarification (not an apology or a retraction, to be clear, so let’s not give Adam credit for doing either of those things) that he was attempting to give the perspective from Watson’s camp, which, uh, shouldn’t be his role. Yes, “insiders” do this kind of shit all the time. When it’s for details about a player option or a player being unhappy with a franchise tag, that’s not a big deal. When it comes to laundering the image of players accused of domestic violence or sexual assault, that becomes a different thing entirely.

Schefter has demonstrated time and again that he doesn’t have the editorial judgment to cover these sorts of stories. After the last round of this, Schefter insisted he’d be leaning more on his editorial staff to help him make calls on pieces like this one. ESPN, though, has invested a lot of money in Schefter’s access and following, throwing even more money at him for a contract extension that came after the original Cook and Watson issues.

This isn’t going to get better. Clearly, Schefter doesn’t care about doing things like this. And the only people with any oversight have turned into enablers, whether it’s actively or passively. Schefter has ten million Twitter followers and a platform with one of the biggest sports media companies in the world and he uses it for “journalism” like this that no one was asking for outside of Watson’s family, friends, and team.