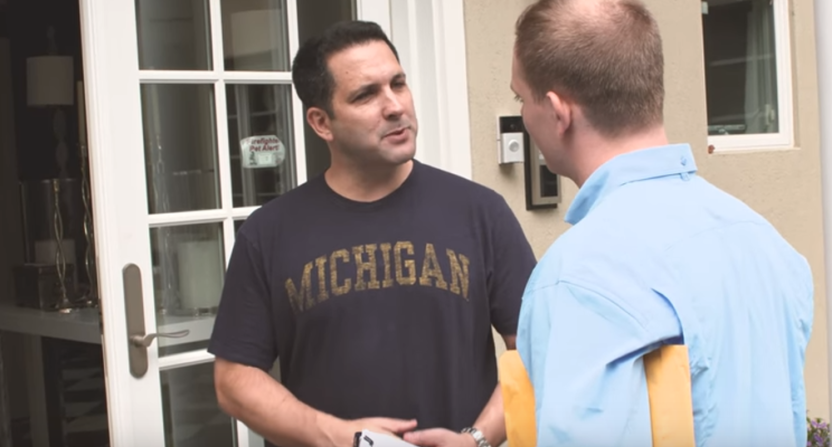 Daily fantasy companies have dialed down the amount they’re spending on traditional advertising from the heyday of 2015, and certain deals and partnerships have fallen through (such as the DraftKings-ESPN exclusive ad deal in February 2016 and ESPN parent Disney deciding not to invest in DraftKings after all back in June 2015), but they remain a force in the sports marketplace and are trying some different approaches to reaching audiences.

The latest? FanDuel’s four-episode scripted “series” of under 60-second-episodes involving ESPN’s Adam Schefter. Variety‘s Todd Spangler has more details on what they’re up to:

Schefter, who joined ESPN as an NFL Insider in August 2009, stars in FanDuel comedic series “A Day in the Life,” debuting Wednesday. The four-episode scripted series shows how fantasy football affects every part of his life — even on his days off.

In the first segment, shot at Schefter’s actual house, he signs for a package from a delivery man — who holds the parcel hostage until Schefter divulges some fantasy picks. In others he gets a haircut at his real-life barbershop and gets a call about test results from a doctor (who, for the record, is not his real doctor). While Schefter doesn’t use the FanDuel product in the series, fantasy sports is the central theme.

With the series, daily sports-fantasy operator FanDuel is looking to tap into Schefter’s fantasy-sports notoriety and his social fanbase — with 6.9 million Twitter followers and more than 580,000 on Facebook — to pitch its brand, as a supplement to its other marketing initiatives.

“He literally invited us into his home,” said FanDuel senior director of operations Adam Kaplan. “We believe we can reach consumers just as effectively, and sometimes more effectively, with social video as compared with TV [advertising].”

The series will run on FanDuel’s YouTube, Facebook and Twitter channels; each episode runs less than 60 seconds. “A Day in the Life: Adam Schefter” was produced by FanDuel in conjunction with New York-based production company Hangar Four.

Here’s the first episode, with a runtime of 42 seconds:

While FanDuel is dubbing this “social video,” what exactly distinguishes that from a traditional TV ad? It’s a scripted exchange with an actor who just so happens to mention “his FanDuel lineup” rather than his fantasy lineup, and it’s got a big FanDuel logo at the end. This wouldn’t look out of place at all in a typical lineup of ESPN commercials. The only differences? It’s 42 seconds instead of 30, and FanDuel isn’t paying a TV company to air it; they’re packaging it as content, sending it out through their social feeds (and presumably Schefter’s), and getting sites (like this one) to post it for free.

It’s interesting to see Schefter involved, though, and that speaks to some of the ongoing connections between ESPN and fantasy sports, and between ESPN and endorsements from their personalities. Back in 2015, Matthew Berry signed an endorsement deal with DraftKings and mentioned them extensively in his column, creating some backlash, and DraftKings has sponsored the ESPN fantasy football marathon for the last two years.

And ESPN personalities doing straight-up ads have included Schefter and Chris Mortensen (with a weird Dominos’ Twitter exchange in December 2015 that wasn’t initially described as an ad, but was later admitted as one), Jon Gruden (Corona and Hooters, which has also included some longer non-traditional videos), Chris Berman (Applebee’s), Mike and Mike (Lee Jeans), Stephen A. Smith (McDonald’s, Oberto, and Taco Bell),  the SEC Network cast (Holiday Inn Express), and more. There’s a whole ESPN CreativeWorks division that’s created other ads, too, and there have also been some more subtle sponsorships, such as the Nike deal with Chris Fowler, Lee Corso, and Kirk Herbstreit that wasn’t revealed publicly until Richard Sandomir of The New York Times wrote about it.

Remember the days of ESPN axing Jenn Brown’s beer sponsorship (for reasons that never were really explained)? Those are long gone, and this particular Schefter deal would probably be okay even under the revised 2011 policy (it only banned endorsements for ” apparel, footwear or athletic equipment” used in sports ESPN covers, and allowed exceptions for analysts). There aren’t necessarily any problems with it; it’s clear this is something promoting FanDuel and something ESPN is fine with. But it’s notable as part of the growing wave of ESPN personalities promoting outside companies, as part of the connections between ESPN and daily fantasy, and as part of a new approach for daily fantasy companies in trying to get their message out there without paying broadcasters to air it.