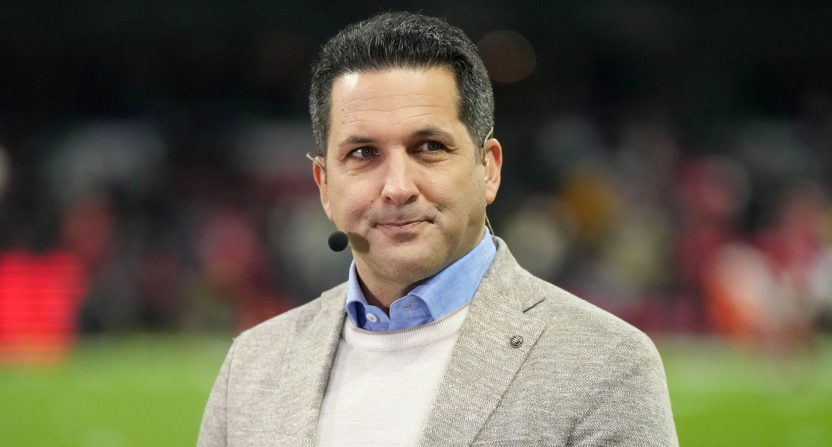 On one hand, he has established himself as arguably the No. 1 news breaker in the NFL world, so much so that one of his tweets can generate an entire news cycle, and often does.

On the other hand, he is prone to tone-deaf declarations, a stunning lack of sensitivity about important issues, water-carrying on behalf of powerful people, ceding editorial control to sources, and blurring the lines between reporter, entertainer, mouthpiece, and pitchman.

Schefter earns his massive contract by breaking many of the biggest NFL stories, but we’re guessing that if you asked, most NFL fans would know him more for the buffoonish things he’s said or done. And as we’ve learned, ESPN seems pretty fine with that trade-off (even if some of his colleagues don’t agree).

Schefter’s inability to balance humanity with the transactional nature of the NFL has been on full display throughout his reporting of the Deshaun Watson sexual harassment and assault allegations. After a grand jury declined to indict the then-Houston Texans quarterback, Schefter tweeted some extremely pointed commentary about Watson’s presumed innocence. The pushback on that was so intense that the ESPN insider threaded an apology of sorts, saying that it was meant to be from the “POV” of “Watson’s legal team,” though that was highly unclear from the initial tweet.

This was a poorly worded tweet that deserves a proper response. It was intended to provide insight into the strategy of Watson’s legal team from its POV. I should have been clearer. As legal experts have explained, a lack of an indictment alone does not mean someone is innocent.

The presumption was that Schefter had learned his lesson about pushing narratives from a player’s reps without identifying them as such or vetting them for clarity. That presumption was proven wrong last weekend when Schefter penned a Deshaun Watson redemption puff piece timed to the quarterback’s return to the field following his 11-game suspension. As AA’s Jay Rigdon pointed out, the report is “full of pure image rehab and a general lack of skepticism as to the narrative he’s more than willing to spread at the behest of whoever in Watson’s camp wants him to do so.”

Deshaun Watson has made what NFL and NFLPA experts have described as "signs of progress" during his mandatory treatment program, per sources.https://t.co/7az28z8HrE

“This isn’t going to get better,” Rigdon wrote. “Clearly, Schefter doesn’t care about doing things like this. And the only people with any oversight have turned into enablers, whether it’s actively or passively. Schefter has ten million Twitter followers and a platform with one of the biggest sports media companies in the world and he uses it for “journalism” like this that no one was asking for outside of Watson’s family, friends, and team.”

All of this brings us to a conversation on this week’s Sports Illustrated Media Podcast between Jimmy Traina and The Athletic’s Richard Deitsch. As part of a much longer conversation about the week that was in sports media, the two discussed Schefter’s seemingly unimpeachable status at ESPN in spite of the neverending litany of errors and poor judgment. Specifically, they mulled over whether or not there is anything the NFL insider could do that would actually lead to consequences. And it sounds like the answer is…not really, no.

“I haven’t really understood some of the decisions Schefter has made over the last couple of years,” said Deitsch, responding to Traina mentioning the Watson story. “Let me say, as someone who has always had a very good relationship with him in my position, I think he’s done a lot of good work. I’m not so quick as others are to blast him. But there have been some things he’s done that are just indefensible. In the last couple of years, he has come off way too much [as] carrying water for agents…and has been so tone-deaf, it feels like, to the larger issues at hand. Often, very serious issues.

“I’m not even trying to cop out on my answer, I’m just befuddled by the tone-deafness. It seems sometimes that Schefter is so into the transactional nature of this job that he forgets about the humanity of what he’s tweeting about. A lot of the things he’d done lately, you cannot defend.”

“He’s a transactional guy,” responded Traina. “His job is ‘This guy’s hurt. This coach is getting fired. This guy’s signing here.’ And then he comes in with the Deshaun Watson story, it seems so out of left field that he would be the one writing that story.

“What I find interesting about Schefter constantly having these issues is that…if someone outside of ESPN did what he did, they’d get blasted so much more because no one at ESPN is going to call out Schefter. So, if someone from Fox Sports or Bleacher Report or SI or The Athletic writes that story, all the ESPN people are going to trash that writer. Whereas, when Schefter does it, they have to sit it out and then he ends up getting even more of a free pass than he gets just because he’s ESPN’s top guy.

Deitsch then noted that Schefter has so much pull behind the scenes at ESPN that it’s hard to imagine any of this damaged his standing there.

“The sort of anonymity of him giving ‘sources’ in relation to what he is saying about Watson’s progress when Watson himself is not saying anything,” said Deitsch. “Watson himself has never come out and formally apologized. It’s pretty unseemly.

In terms of the past, I don’t think Schefter gets a pass on the court of public opinion but he is on the highest of high lists of front-facing talent who have juice and power, and leverage at ESPN.

“He has the Jordan Rules,” said Traina.

“He’s in the Stephen A. Smith stratosphere,” said Dietsch. “I don’t think he will ever do anything where it would put him in really bad status with ESPN management. They are paying him $9-10 million dollars a year, and he’s an excellent news breaker, unquestionably so, and so I think they have clearly made a decision that they are willing to deal with the fallout of some of this stuff in turn for Adam Schefter’s access and writing contacts.

“ESPN has told you, just to be blunt, they don’t care. The net result of all this is, yeah, he takes a hit in the court of NFL public opinion and on Twitter, but that’s it, I don’t think anything else changes from it. I’m not saying that’s a good summation, I just think that’s the reality of it.

“Now, you are 100% right. If that is being done by ESPN’s beat reporter of the Texans or Dolphins, that person is in major trouble. I don’t know if that person’s getting suspended without pay but that person is probably getting pulled from their job for a little bit after their ESPN boss talked to them. So that’s the difference.

I can’t tell you how many people at ESPN who are front-facing people have ‘Jordan Rules,’ but he’s one and Stephen A. is one and [Troy] Aikman and [Joe] Buck are one.”

“Yeah, Woj. There’s probably ten. [Kirk] Herbstreit,” continued Dietsch. “People who are paid a ton of money and people who have longstanding relationships with management. They’re treated differently. By the way, in the exact same manner as when you and I worked at SI and Rick Reilly was there, rules were different for Rick Reilly than they were for Jimmy Traina and Richard Dietsch.”