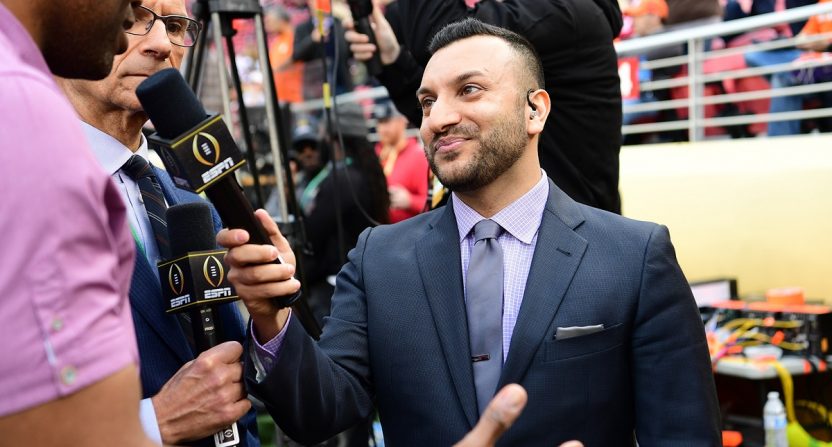 Earlier this week we learned that Bomani Jones and Pablo Torre had reached new deals to remain at ESPN. Today, we have news of another young ESPN talent making a different choice.

According to a report from Andrew Marchand in the New York Post, rising play-by-play man Adam Amin will leave ESPN for Fox Sports.

Sources said Amin and Fox are finalizing a deal that will have him call NFL or college football, as well as Major League Baseball. Amin, 33, could also do some college basketball.

Amin had moved up the ESPN ranks after joining it as a play-by-player at 24 in 2011. He was on Thursday Night college football, the women’s Final Four and also called NBA and MLB games. In 2016, just shy of his 30th birthday, ESPN said he was the youngest ever to call a New Year’s Day Big Six game when he did the radio call of the Fiesta Bowl.

Fox feels it has added young depth behind Joe Buck and Kevin Burkhardt with Amin joining 32-year-old Joe Davis in its stable.

It’s wild that Amin has been with ESPN for almost a decade and is still only 33. He’s called some memorable moments, too, including Arike Ogunbowale’s national championship buzzer-beater in the 2018 Women’s NCAA Tournament.

I'm such a fan of the announcer camera. Adam Amin, Kara Lawson, and Rebecca Lobo are national treasures. pic.twitter.com/9CDini9Qjz

Fox obviously has plenty of football inventory across both college and the NFL, so it will be interesting to see where Amin lands. And his college basketball resume obviously makes that a natural fit for him as well. He’s versatile, and somehow both young and very experienced. It’s no surprise that Fox would want to lure him from ESPN. Kudos to them for successfully pulling it off.