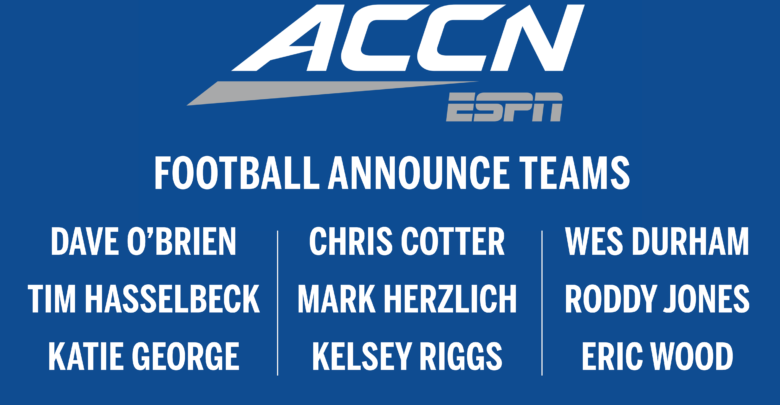 We’re getting closer to the Aug. 22 launch of the ACC Network, and while whether some big providers will carry it is still up in the air, we’re learning more and more about the new network’s on-air talent. On Wednesday, ESPN announced the network’s three football broadcast teams, plus additional studio talent and studio shows.

And the talent there is an interesting mix of veteran ESPN personalities in new roles (including Dave O’Brien, Tim Hasselbeck and Jac Collinsworth) and new-to-ESPN figures (including Jon Beason, Wes Durham, Mark Herzlich, Eric Wood and Mark Richt). Here’s more about the broadcast teams (shown in the graphic at top) and the studio analysts from ESPN’s release:

O’Brien, who has been in the industry since 1987, including 15 years at ESPN, will call play-by-play alongside former NFL Live studio analyst Hasselbeck and former NBA sideline reporter Katie George. Chris Cotter, another versatile ESPN on-air personality, will be joined by newcomer and Super Bowl Champion Mark Herzlich in the booth and former Charlotte, N.C., sports anchor Kelsey Riggs on the sidelines. Twenty-five-year professional Wes Durham will be accompanied by ESPN analyst Roddy Jones and former NFL Pro Bowler Eric Wood on the field.

In addition, Collinsworth, the host of NFL Live, will also host ACCN’s signature football program The Huddle, while Beason, a studio analyst, will share insights and analysis earned during his playing days at Miami and in the NFL.

“We feel very lucky to have assembled such a smart, fun, thoughtful group to cover ACC football both in the studio and announce booth on ACCN,” said Amy Rosenfeld, ESPN senior coordinating producer and production lead for ACCN. “ACC schools are well represented on our team. We will also have the benefit of a wide range of experience – from coaching to alums from both the offensive and defensive sides of the ball.”

There are some interesting names there on the broadcast side, perhaps especially Wood. Wood found success as a center at Louisville and then was picked in the first round of the 2009 NFL draft by the Buffalo Bills, who he went on to play for through 2017. He suffered a neck injury late that year and was eventually released in 2018 after agreeing to an injury settlement, and he’s been picking up media gigs since then, including signing on with The Athletic as a Bills columnist last fall and being named the Bills’ new radio color commentator in May. And now, he’ll be a field reporter for ACC Network broadcasts as well.

The studio side here is also notable. The release includes details for two studio shows, All ACC and The Huddle. All ACC will provide news and information across the ACC’s 27 sponsored sports, and it will be the first program to air on the new network, debuting Aug. 22 at 7 p.m. Eastern. After that, it will air on Monday, Tuesday, Thursday and Saturday nights in the fall. Riggs is a host for that (as well as Jordan Cornett and Dalen Cuff), and it will feature a rotating cast of analysts.

Meanwhile, The Huddle will be a football show airing on Friday nights and Saturday mornings in the fall, and it will be hosted by Collinsworth with Eric Mac Lain, EJ Manuel and Richt (whose hire was announced back in April) as analysts. That adds to a busy fall for Collinsworth, who will also still be contributing features to Sunday NFL Countdown.

In addition to the personnel lineups, ESPN also put out a video previewing the graphics package for ACC Network Wednesday, accompanied by a release featuring Rosenfeld saying “I have never seen an animation package that is so interesting, complicated, risky and exciting.” Here’s that video:

There’s still a month before ACCN officially launches, but we now know a lot of the figures who will be involved with it. And we’ll see how that launch goes.