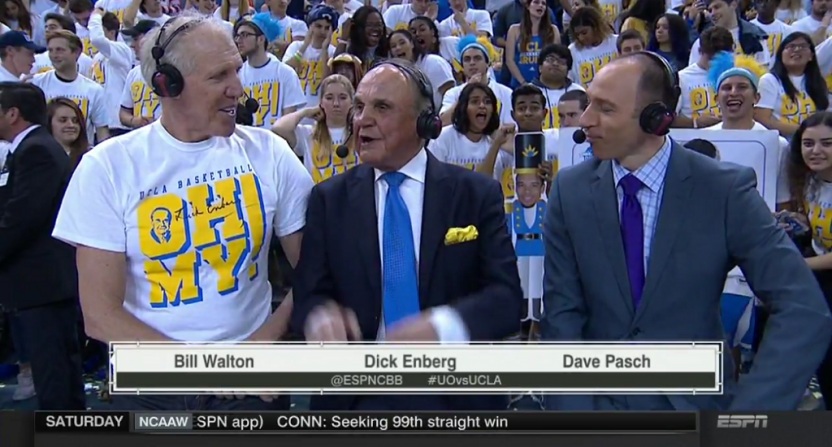 So, Magic Johnson has had trouble saying Russell Westbrook’s name for a long while. I knew this going into Saturday’s Warriors-Thunder game in OKC, so when I saw Magic was on as a studio analyst for ABC/ESPN, I made sure to pay attention to it, and he didn’t disappoint.

I mean, I suppose it’s disappointing Magic can’t get the guy’s name right, but I was happy for entertainment purposes to see he’s still getting the first and last name mixed up.

I believe here it’s “Wussell Restbook” actually, and not “Wussell Restbrook”, but the point remains- either way, it’s definitely not “Russell Westbrook”:

Just to further prove the point, I did a Twitter search and saw someone got more video evidence of Magic doing this (on crappy home video; this is why you use Clippit, folks! but we appreciate the video nonetheless.):

Magic veers close to saying, "Wessell Rustbrook" or "Wussell Restbrook." I empathize. Been there. Dangerous name at speed. Just like Russ.

We'll call it a tie.

Magic Johnson just said "Wussell Restbwook" and did not correct himself.

Oh my! Dick Enberg honored at UCLA, with a little help from Bill Walton

Legendary — and recently retired — broadcaster Dick Enberg was honored during the UCLA-Oregon showdown at Pauley Pavilion. He was the voice of the Bruins during their dynasty run, calling eight UCLA national championships. Here’s more, from AA’s Alex Putterman:

There was certainly something poetic about Enberg being honored at UCLA at the end of his career. More than 50 years ago, the Michigan native got one of his first big breaks when he was hired to call Bruins games for KTLA in Los Angeles. He spent a decade as the voice of UCLA basketball, narrating the dominant John Wooden-coached Bruins teams of Walton and Lew Alcindor.

Fittingly, Enberg was presented with a UCLA jersey and plaque from two stars of those UCLA teams, Jamaal Wilkes and of course, Bill Walton. Walton — like the students in attendance — was rocking an awesome shirt that featured Enberg’s famous catchphrase, “Oh my!” And Enberg joined Walton and Dave Pasch on the ESPN broadcast of the game. We even got to hear an “Oh my!” from Enberg:

And I’ll also throw in this hilarious clip of Walton saying “What a pass!” on a missed layup that turned into an awesome putback dunk. Pasch’s reaction is great:

There was a rumor making the rounds last week about LeBron James pushing the Cavs to trade for Carmelo Anthony, even if it means the Cavs sending Kevin Love to the Knicks. The rumor started in a story from the New York Daily News’ Frank Isola. It was even discussed by Kevin Harlan and Grant Hill during the Cavs-Wizards game on TNT:

After the game, LeBron called the rumor “trash”, and said “the guy who wrote it is trash too”:

Tom Brady’s jersey was stolen (or at least lost) after the Patriots’ Super Bowl victory, and former NFL head coach Herm Edwards seemed quite angry about it on ESPN’s NFL Live. The rest of the crew was joking around about it being on Gronk’s party bus, and then Edwards jumped in with this:

There’s two things in life you don’t want to be: a liar and a thief. That’s not good.

So, if you’re the person that has Tom Brady’s jersey, do yourself a favor: turn it in. Turn it in!

Uh, I’d say there are a lot of other things you don’t want to be, like a murderer, abuser, etc. But, we get the point that Edwards thinks it’s a horrible, horrible thing that Brady’s jersey is missing, and he’s ready to kick someone’s ass.