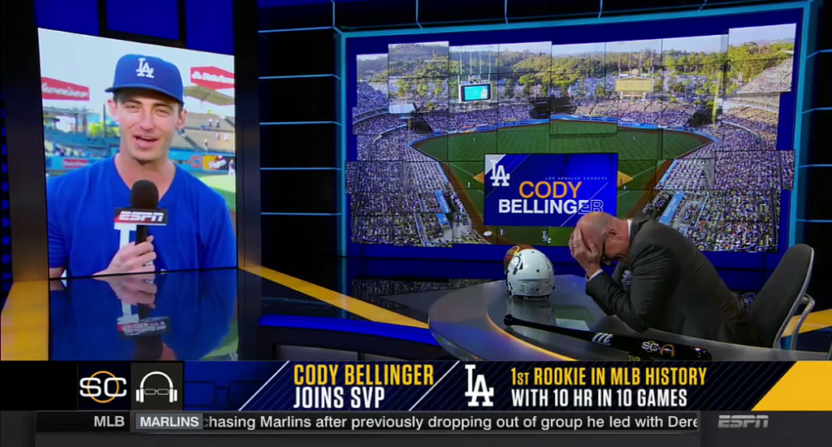 Get ready to feel old

Cody Bellinger is well on his way to winning the National League Rookie of the Year award (and perhaps even contend for NL MVP), after cranking 24 dingers in just 61 games for the Los Angeles Dodgers so far in 2017. Scott Van Pelt had the slugger on SportsCenter with SVP to talk about the incredible start, and to also get the answer for a question he asked Dodgers pitcher Brandon McCarthy about Bellinger last week: Does Bellinger know who Jerry Seinfeld is?

Bellinger said that he knows the name, “but couldn’t put a face to the name.” SVP’s reaction was terrific, and likely similar to yours:

Bellinger was born in 1995, and Seinfeld was on the air from 1989-1998. But it still seems hard to believe that someone could live in America for the last 21 years and not know what Jerry Seinfeld looks like.

Awful Announcing’s Jim Weber put together a tremendous NBA Draft drinking game, in which you were to take a drink every time you hear specific words or phrases mentioned by the ESPN analysts.

Example: you take a drink(s) whenever Jay Bilas says words/phrases such as wingspan, potential, basketball IQ, attacks the rim, stretches the floor, freak athlete, etc. Well, Bilas was very aware of the game.

The 2017 NBA Draft Drinking Game. I don't approve…because I can't play. America will be hammered by the 12th pick. https://t.co/qB9Q4C8kTk

And Bilas made several references to the drinking game during ESPN’s draft night coverage (even Fran Fraschilla did!):