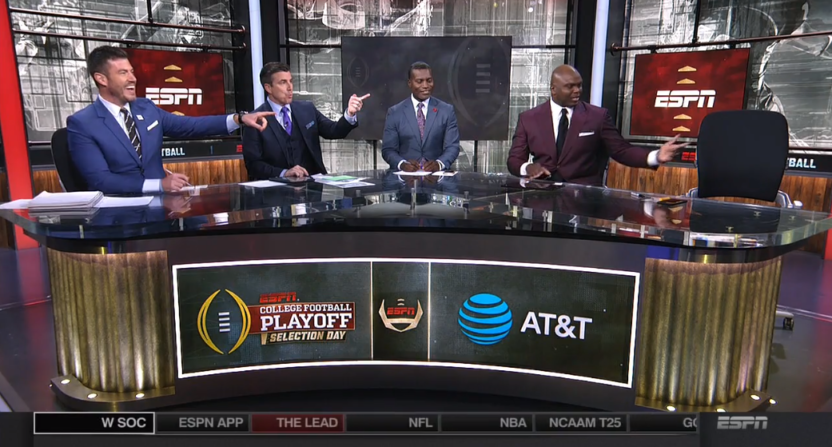 The Alabama Crimson Tide got the fourth College Football Playoff spot over Ohio State, and former Buckeyes quarterback Kirk Herbstreit was so stunned that he briefly left the ESPN set.

Update: There appears to be some misunderstanding over our intentions in posting this video and the headline to this article. This clip should further clarify what actually happened.

Bill Walton was in rare form on Tuesday night, even for Bill Walton

These are just a few of the many crazy things Bill Walton said on Tuesday night’s Arizona-Texas A&M broadcast.

Walton on potential No. 1 overall NBA pick DeAndre Ayton: “You just look at him and you say, ‘Oh my gosh, I believe in evolution.’”

Walton to Pasch: “Not only do you hate my grandchildren, you don’t believe in evolution.”

And Walton referring to this as “one of the four worst possessions in Aggie history.”

During the crazy AAC Championship Game, ESPN’s Steve Levy forgot that Brett McMurphy had been laid off in April, and referred to the college football reporter as “Our own Brett McMurphy.”

It sure seems so, and many viewers tweeted about it.