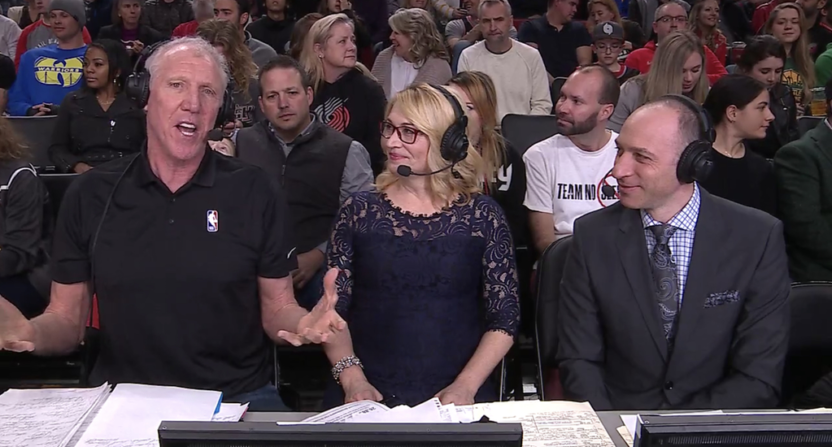 Bill Walton is strictly a college basketball announcer these days, except for one day a year where ESPN has him do color commentary for an NBA game as part of their NCAA-NBA “Crossover” night. So Walton joined his usual college hoops broadcasting partner Dave Pasch, as well as the great Doris Burke for Wednesday night’s Warriors-Trail Blazers game in Portland.

After Kevin Durant made a tough layup (for two of his 50 points on the night), Walton referred to him as Steve Jobs. Pasch’s deadpan after Walton’s rant is great: “In other news, Lillard misses…”

In the third quarter, Walton explained how Steph Curry is… Mozart.

““Steph Curry is Mozart. Mozart… he could write music before he wrote words. And that’s what Steph Curry does.”

“Steph Curry… KD… what a show! Mozart… Steve Jobs… together!”

Walton also called this Blazers possession, “one of the six worst possessions in the history of the Portland Trail Blazers.”

He of course then “apologized” for the comments, but not a good look here.

After Shaun White won his third gold medal in the men’s halfpipe, the American snowboarder had some f-bombs that the NBC cameras caught on live television. We’d probably all have a similar reaction in celebration after winning a gold medal.