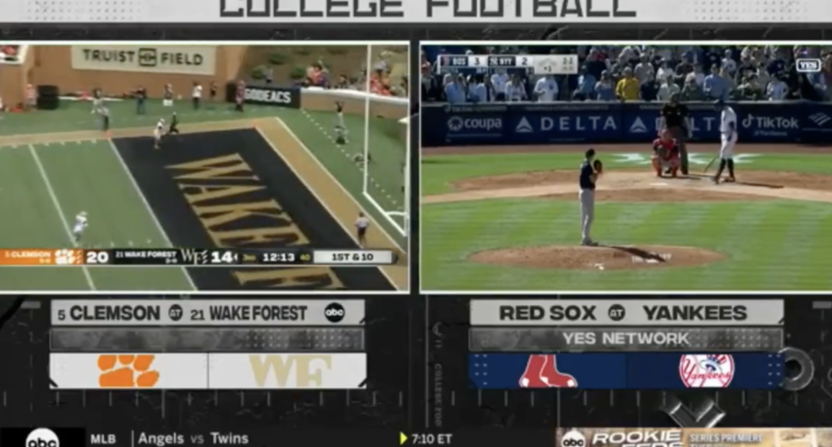 The problem? It has now created a new short, regional nightmare that the rest of America has to grapple with. Judge’s 62nd home run, which *checks notes* still leaves him well short of the record for most home runs in a season.

finally, Aaron Judge has done it. he’s pulled to within 12 of the single-season home run record

While a notable and noble accomplishment in the world of Major League Baseball, the hype surrounding Judge’s home run chase, and the ways that many have been bending over backward to make sure America could witness it live, has created a lot of Sturm und Drang in the sports and sports media worlds.

The (frankly) embarrassing way that many people purposefully confused themselves and others over how Apple TV+ works last week was positioned as a desire for America to witness this “miracle,” but was truly just New Yorkers being annoyed that the home run might not happen on their terms. If they couldn’t watch the game on YES Network and they couldn’t listen to Michael Kay make the call, the world needed to burn.

We all survived the horrors of a Yankees-Red Sox game being broadcast for free on a streaming service. But things seemingly came to a head on Saturday when ESPN decided to continuously interrupt the Clemson-Wake Forest college football game with cut-ins to every Judge at-bat. That didn’t make a lot of sense for a multitude of reasons, including:

For some, the decision made sense because Judge’s potential 61st home run felt significant. For many others, however, it felt like the media hype over Judge’s home run chase created a false sense of history that didn’t warrant such coverage, especially at the expense of the sporting event they actually tuned in to watch.

Curiously, ESPN did not do cut-ins of Aaron Judge’s at-bats during Monday Night Football, even though the audience for that game (New York Giants fans and front-running Dallas Cowboys fans) might actually be interested. The logic behind when to show Aaron Judge and when not to show Aaron Judge seemed to defy common sense. Perhaps ESPN had realized that football fans would simply rather watch football than a Yankees slugger tie a team record.

Apparently not. Per Andrew Marchand, who has been cheerleading the cause of making Judge at-bats available to every human being on the planet for weeks now, ESPN will be doing cut-ins all weekend long.

All three Yankee games this weekend will also be on MLBN outside of the YES footprint.

ESPN will also have cut ins.

Good job by MLB, basically making Aaron Judge's potential 62nd homer available as many places as it can. https://t.co/6Zd15BuABe

So if you’re excited to watch one of the early college football games on the ESPN networks this weekend, such as Kentucky vs. Ole Miss, Purdue vs. Minnesota, Northwestern vs. Penn State, or Iowa State vs. Kansas, get ready to see a whole lot of Aaron Judge for some reason.

Perhaps ESPN has some kind of data to tell them this is what sports fans want. But judging by the initial reaction, it sure seems like many college football fans would just much rather watch their college football, thank you very much.

Good news for all the Yankee fans also watching the Kentucky-Ole Miss game on Saturday. https://t.co/z3Igv2N6Oj

what if i tune in to watch football and don't want to watch baseball https://t.co/Hyg5kIEPXu

There’s a larger, more interesting conversation driving what’s happening around Judge’s home run chase. That, for many baseball purists, wherever he lands this season, that will be the “real” home run mark, not the ones set by “evil cheaters” Barry Bonds, Mark McGwire, and Sammy Sosa. Judge’s quest has a nobility to it that makes it matter beyond him just breaking a team record, it seems.

On the flip side, however, is a larger contingent of sports fans who point to the actual MLB record books to prove that Judge’s home run chase, while impressive, is not worthy of the treatment it’s receiving. He’s not breaking league records. He’s not making history. And if they wanted to watch Judge blast another dinger, they’d just tune in using the ample options available to them to do so. So there’s no reason to interrupt their college football experience with it.

Clearly, ESPN either doesn’t care. Or truly believes that you do. Either way, like so much sports media out of New York City, you’re getting lots of it whether you want it or not.