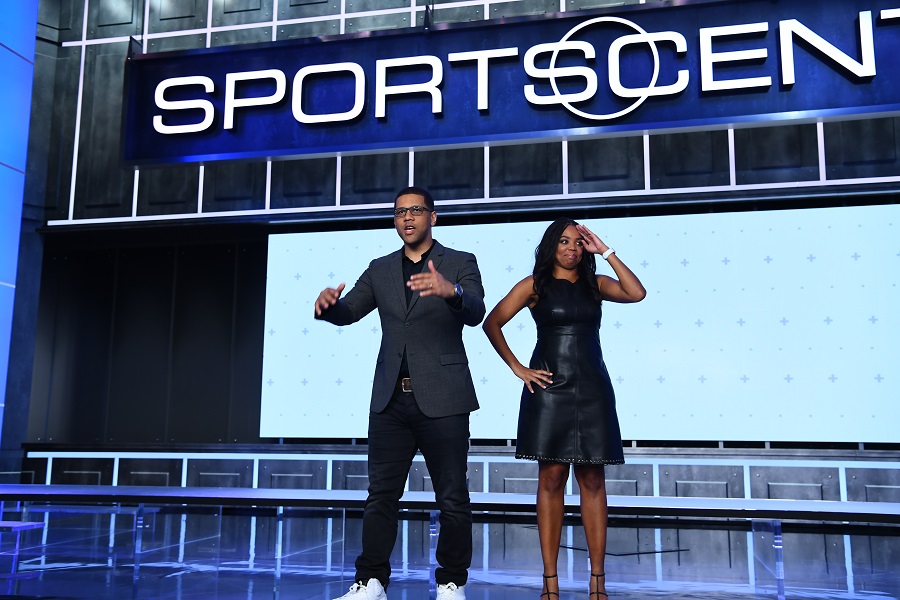 For three years, Michael Smith and Jemele Hill employed their unique brand of conversational sports talk that was unafraid to talk about the day’s pertinent issues on their ESPN2 show His & Hers. Starting on Monday, Smith and Hill will host the new rebranded 6 p.m. SportsCenter, or SC6. Or #TheSix. Or whatever you want to call it.

In an extensive interview with Awful Announcing, Smith and Hill discussed their transition to SportsCenter, their thoughts on sticking to sports, whether ESPN is truly a liberal network and a lot more.

Note: This interview has been edited for clarity and length.

Why take this gig to host the 6 p.m. SportsCenter?

Jemele Hill— [Laughs] Well it’s kind of a no-brainer. Even though this was not something that Mike and I ever set out to do, it wasn’t on our goal-board or anything. I think what appealed to us was the level of creative autonomy they were willing to give us, the time slot, the fact that it was on ESPN. And really the fact that they also seem to really believe in what we created on His & Hers and kind of wanted us to do the exact same thing on SportsCenter, but do it in, obviously, a grander way given the resources that the brand has.

You’re in the 6-7 p.m. time slot, so there’s a wide variety of competition in that hour, including the national network news broadcasts. Who do you guys consider your competition in this slot?

Michael Smith— Honestly, we don’t think of it that way. We leave that to people with higher titles and higher up on the food chain to worry about that kind of stuff. Because our competition at noon was work and school. So our attitude is, if we do the type of show we know we’re capable of doing, and we have fun, and we become appointment television, people will find us. Whether it’s through DVR, whether it’s the podcast that we’re going to continue to do— we’re going to do the original podcast, and we’re going to podcast this show— or they’ll just make it a point to watch us instead.

We’re our own competition. Our competition is the inability to get better, which we’re constantly fighting. Our goal is to get better every single day. And I know that sounds cliche, but we never worried about that. We didn’t do the His & Hers podcast four years ago thinking about downloads. We didn’t go into His & Hers every day thinking about the show before us, the show after us or ESPN. We just looked in each other’s eyes and had the best conversations we could. And here we are.

So I think people are just going to find themselves compelled to watch us coming off of PTI. We have a hell of a lead-in in happy hour on ESPN and that’s honestly not a concern for us, is competition. We feel like we’re unlike any show out there.

I think I’m speaking for Jemele on that. [Laughs]

Hill— If I had something more poignant to add, I would’ve done so.

Smith— You and I have never discussed that, never sat back and been like “we’ve got the Nightly News to worry about” or we’ve got this network or that network to worry about. It’s just been ‘hey, how do we do tomorrow’s show better than we did today’s?’

Hill— I think that was probably the perfect way to put it. Obviously, having such a huge lead-in in PTI, of course you want to create momentum off of that. And there is a point where we look at the ratings and [let’s] say people are tuning out or there’s no growth there, clearly you have to reassess what you’re doing. I don’t think you can do things specifically with the intent, necessarily, of ratings. All you have to do is really the best show you can and the show that’s kind of true to who you are. And then just kind of deal with whatever the consequences or whatever the benefits are. We always say we’d feel good about any show that we did as long as we were doing it our way and we’re doing it in a way which we could be proud of.

There was a Ringer story on Monday by Bryan Curtis on how stick to sports is now dead. Do you agree with that in this current political climate?

Hill— Was stick to sports ever alive? I think that’s the bigger question. I mean as much as people, because of the intensity of the political climate, people maybe feel like there’s less separation. But if you look at the history of sports, politics are always in sports.

Some of the best, biggest and most celebrated athletes were people who were political figures. Muhammad Ali, John Carlos and Tommie Smith, Jackie Robinson. These are people who changed the dynamics of society and sports. So I think it was just completely unrealistic for people to ever think that politics aren’t a part of sports. And I think probably the only reason people didn’t recognize it was that it turned out that all those people were on the right side of history. So if we didn’t look back and say “oh, what great contributions they made,” considering at the time, all these great people were reviled.

I think with athletes having their own social platforms building with the money they’re making, because of their condition, they feel far more emboldened to speak out about the things they see happening in this country.

Smith— I’ll be less diplomatic and less nice about it. Stick to sports is bullshit. And always has been bullshit. And it’s been a cover on two levels. Really it’s people saying, the people who say stick to sports don’t agree with you. And instead of just saying “I respect your opinion, but I don’t agree with you,” they’d rather say stick to sports as some kind of an insult to say well, you’re a sports personality or in the case of athletes and coaches, your profession is in the sports realm, so you obviously possess an inferior level of intellect and you’re incapable of opining intelligently on matters of society when it comes to politics.

The retort to stick to sports should be “well, stick to your job.” Stick to working on computers. Stick to your desk job. Stick to teaching. Stick to art, whatever it is you do. But nobody ever says that. Stick to sports became a thing because people felt like sports personalities such as Jemele and myself that somehow we were incapable of having an opinion on politics, like we don’t pay taxes, and may I say lots of taxes.

Secondly, stick to sports is also a very privileged position to take because usually the people that say stick to sports are saying it because they find sports and sports television and shows like ours to come as an “escape.” They come to us for an escape from the real world. But the truth of the matter is, there’s no escaping that. And only the people that can escape from it are the people who don’t have to deal with those problems. So whether it’s racism, misogyny— whatever it is— homophobia, whatever it is that are issues we touch on. And when you “say stick to sports, I don’t feel like hearing about that,” well that’s because you can afford to take that position because it doesn’t affect you.

Because even these athletes that are speaking out, that are using their voices— especially when it comes to matters of race and policing— they realize that their occupation doesn’t insulate them or doesn’t protect them from being victims of bigotry. So that whole stick to sports thing, it’s a clever hashtag but it’s really a bunch of bullshit.