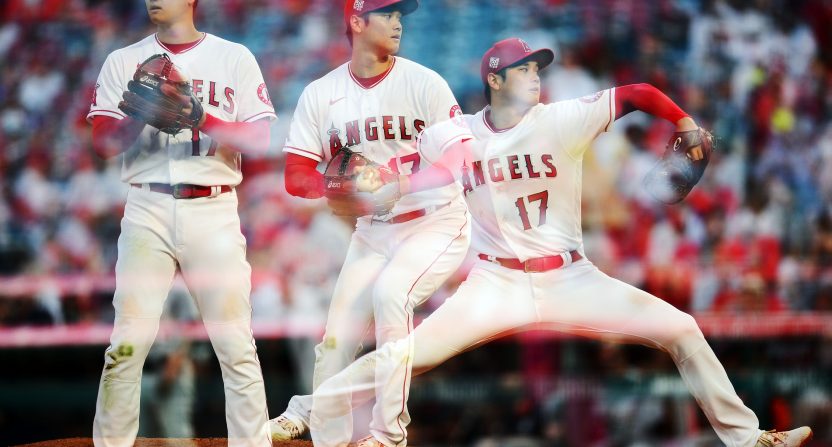 Ohtani’s been one of the most compelling stories in baseball this season, and his performances at the plate and on the mound have attracted eyeballs and attention around the globe. That’s a good thing, right?

Well, maybe not, according to prominent baseball expert Stephen A. Smith, who thinks Ohtani’s stardom and potential status as “face of the game” (which isn’t something that exists, but that’s neither here nor there) is a bad thing…because he needs an interpreter.

Here are Smith’s full quotes from this clip, though he said similar things throughout the minutes-long segment.

“I don’t think it helps that the number one face is a dude that needs an interpreter so you can understand what the hell he’s saying in this country. And that’s what I’m trying to say. Like basketball, Dirk Nowitzki was German and Manu Ginobili and others were from other places, and guess what Max? They spoke fluent English. You understood what they were saying when someone was interviewing them.”

The full segment, which will likely be pulled from YouTube sooner rather than later, is available here.

"Baseball has a damn modern day Babe Ruth on their hands and what are they doing about it?"@StephenASmith is mad about the lack of marketing of Shohei Ohtani. pic.twitter.com/nY4sg7iQHx

This take is especially bad, given how many young, talented MLB stars don’t speak English as their first language (Ohtani, Vladimir Guerrero Jr, Ronald Acuña Jr to name three). Sorry guys, Stephen A. doesn’t think you can’t be the face of baseball because you need an interpreter.

I don’t even know why this shit would matter to anyone. Are people actually sitting there in awe of players like Ohtani, thinking “this is amazing, but I would like him a lot more if he was spouting off cliches and milquetoast responses in English”? If so, your brain is probably broken.

Baseball is an international game, and that international flavor should be celebrated. Instead, hours before the Home Run Derby and on the eve of the All-Star Game (featuring a whole lot of non-American players!), we’re talking about a stupid opinion from someone paid millions of dollars to scream loudly about sports he’s hardly an expert in. This sure is a great media landscape!

Oh, and for the record: Ohtani can speak English just fine.

What even are we doing here?

On my earlier comments about Ohtani pic.twitter.com/FM0vnDDXBB