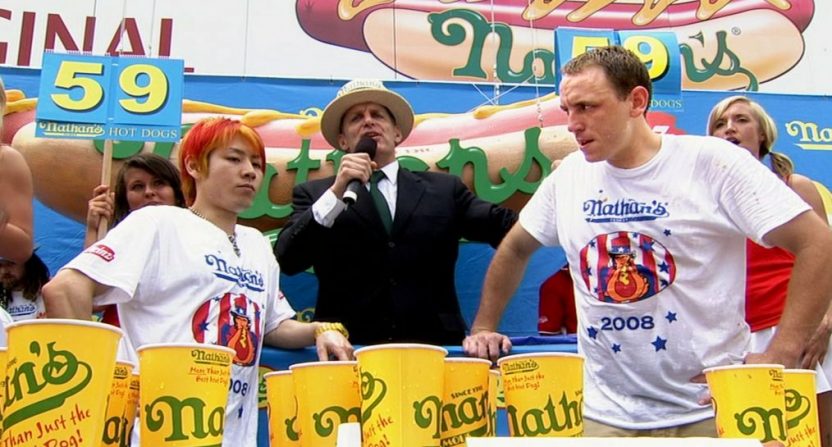 Installment: #102 by ESPN’s count (#103 by mine, counting the O.J. doc as one installment, although ESPN initially counted it as five different 30 for 30s, but now seems to list it separately, not as part of the series. Additionally, one finished project, Down In The Valley, has been suspended from airing.)

Most Similar To: Chasing Tyson, Mike and The Mad Dog

Review: A cynical way of looking at The Good, The Bad, The Hungry is that this is a marginal subject for a 30 for 30, but one that makes much more sense when factoring in the fact that it helps promote ESPN’s airing of the Nathan’s Hot Dog Eating Contest this week. However, a small boost in viewership for one hot dog contest alone is not a good reason to make a documentary. Perhaps there was hope that an introspective and engaging film probing the messy history of the passing of the competitive eating torch from Takeru Kobayashi to Joey Chestnut could perhaps serve as the first step in repairing the relationships that could bring back Kobayashi from his nine year hiatus from the contest.

Could a documentary be the catalyst of Kobayashi’s return, and thus a ratings boost for the hot dog contest for the next decade and beyond? A 30 for 30 did seem to be bring the XFL back from the grave, so maybe that’s a feasible outcome. With the participation of Kobayashi, Chestnut, and George Shea, the Vince McMahon of competitive eating, all of the ingredients were there for some type of breakthrough in the ten year impasse of Kobayashi’s relationship with with Major League Eating, the entity run by Shea that promotes the contest and many other popular competitive eating events.

The Good, The Bad, The Hungry takes a deep dive into the origins of the modern hot dog eating contest, which centers around the emergence of Kobayashi as an eating prodigy. Kobayashi’s first appearance (2001) in the contest saw him double the all time record and his dominance was unchallenged until Chestnut’s arrival, which led to a four year span in 2006-2009 where the pair were in a class all their own.

The rivalry was the sport’s only credible mainstream marketing asset, and it vanished as quickly as it appeared. Nobody has come close to beating Chestnut since. The film spends about a third of the film retracing the rise of Kobayashi, a third on the budding rivalry between the two eaters, and the last third focuses on the splintering of the rivalry.

In our next film, we dig into one of the biggest rivalries in sports: Kobayashi vs. Chestnut.

"The Good, The Bad, The Hungry" premieres July 2 on ESPN. pic.twitter.com/Iuuecb66DH

Chestnut and Kobayashi never really shared much of a bond. In fact, Shea and others orchestrated their words to inflame the public perception of ill will between them. While the film tries to bring them back together, recent interviews seem to indicate that neither seems to be gravitating towards a Bird vs. Johnson or Palmer vs. Nicklaus type relationship.

Over time, Kobayashi went from an American hero to almost an Iron Sheik-esque foil to Chestnut. Kobayashi, who spends much of the film in tears, didn’t take well to his new heel status in the US. At a time where he was the most vulnerable, Kobayashi found himself more disenfranchised and hurt as Shea was firm in his positions regarding Kobayashi and his Major League Eating obligations. A decade later, it’s still an issue.

I judge my reviews on a) how good of a story is it and b) how well did you tell it. Director Nicole Lucas Haimes does a solid job with a thin subject matter. Shea does a great job providing color and context to the story, but the film struggles to build on that story throughout, simply because Chestnut and Kobayashi aren’t the most talkative and colorful interviewees. That’s not an uncommon problem, but because this is competitive eating and not a major sport, there aren’t a half dozen or so media folks and retired athletes you can draw on to round out the film’s commentary. It’s just a bit flat in a few spots. Also, there aren’t many news clippings and segments to draw from.

The film does end on a bit of a high note, as we hear Haimes’ voice for the first time, nudging Shea to extend an olive branch to Kobayashi. At that moment, we all become invested in a Kobayashi return. It’s easy to see throughout the film that his scars haven’t healed. While it’s a nice moment, the film never just feels as culturally or emotionally significant as other installments. We don’t have much substantive commentary from the pair about each other. We don’t get much framing about how both can be seen as average people rising above and chasing the American dream. We don’t get much framing of what the hot dog contest means to people. If anything, we’re left with the idea that greed, gluttony, and national pride was a cocktail too bitter for Kobayashi to swallow and it’s hard to blame him after retracing his journey.

Perhaps similar to the XFL’s return, the significance of this film will change if Kobayashi and MLE do mend their burnt bridges. Until then The Good, The Bad, The Hungry is very much like a hot dog that tastes great and is cooked correctly, but has way too much bun and only one condiment packet. If you’re hungry, it fits the bill, but you can’t plan your day around it.