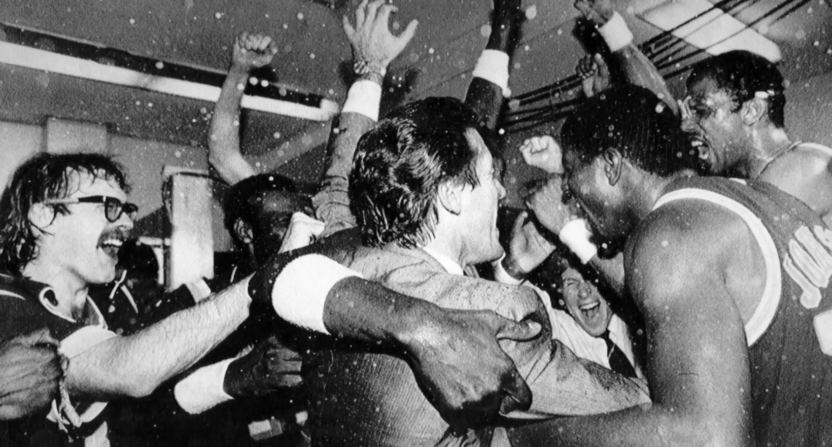 Length – 254 minutes without commercials, 300 minutes with. Will be spaced out in three parts over two nights with three hours on night one and two hours the following night.

Installment – #90 by my count. ESPN considers this #94 as they count the OJ documentary as five separate installments. (They also don’t count the “suspended” Down In The Valley installment.)

Most Similar To – Winning Time: Reggie Miller vs. The New York Knicks

Review – (Ed note: Before I get into this, I want to apologize for this being a bit of a more concise review. This is a longer film that had screeners go out closer to the air date than normal.  I usually am pretty thorough researching these films and rewatching key portions but given how long this was, the timeframe, as well the fact that I was in a car accident over the weekend, this review will be a bit half-assed).

You can’t argue that ESPN wasn’t exceptionally shrewd in selecting and scheduling this 30 for 30, a documentary about two rivals who kept meeting in the NBA Finals that ultimately will air during the backdrop of the modern day doppelgänger of the Lakers and Celtics rivalry of yesteryear. Ultimately, though, five hours is an awfully big ask, especially when you consider the longer OJ installment had a much broader base of possible viewers opposed to a film focusing on two specific teams.

I’m confident Lakers fans and Celtics fans will LOVE the film. It doesn’t favor one team or the other. The film goes back and forth and each team has their own narrator, which works well, although I suspect many will find Ice Cube’s narration grating, (I did at first, but grew used to it. I’ll guess many won’t be as accepting of his unique tone.)

Hardcore NBA fans will also most certainly like the film. Where I think Best of Enemies will struggle is with casual fans, as a) it’s long and b) it’s definitely uneven.

I actually was not fully aware of how extensive the rivalry is with 12 NBA Finals meetings in five different decades. That’s insane and definitely fills up five hours. That said, I have a hunch, the more casual viewers’ interest will fizzle out during the first part, which mostly chronicles the six match-ups from 1959-1968. Part of the issue here is something we’ve observed for a lot of documentaries in that the further you go back in time, the fewer amount of people will have a connection or recollection of those events and personalities. Yes, some younger folks do enjoy fresh stories that predate their sports knowledge base, but most just have less interest in things before their time by a considerable amount of years.

The other issue is when you go back many decades, you lose a substantial amount of key ingredients to sports documentaries. Older topics have fewer archived highlights, archived media coverage and commentary, and many of the people involved may have passed or have a less vivid recollection of the events in the film.

Part 1 focuses on this older era and certainly does have its moments, but I think for many casual viewers, it’s going to be too long and not relatable enough to retain viewers all the way until Part 2 which is significantly more compelling as it focuses on the 1984 Finals, the first time we saw Bird vs. Magic in the NBA Finals.

Part 2, though, is very strong and Part 3 is also pretty stellar. That said, I think some viewers will have a bit of fatigue with the long ask of nearly five hours one a pretty narrow subject, regardless of the execution and quality of the story. Maybe that comment is off-base, given how much we enjoy binge-watching, but I just don’t know if the wider 30 for 30/ESPN audience is going to be excited to strap in for five hours on any topic outside besides O.J. Simpson or Muhammad Ali.

There are a lot of great nuggets in the film as well as many great interviews. Bill Walton was one high point, as was the social and cultural introspection of Los Angeles and Boston. Retracing the NBA’s rise as a major sport was also an interesting tangent that other 30 for 30 installments have touched upon. I think younger fans will be surprised with the lack of the success the league had until the Magic vs. Bird era propelled the league to new heights.

There was a lot to absorb and  Podhoretz did a great job with the film. I would say it may have been better to just focus on the 80s, but HBO essentially already did that. So I’m not sure ESPN would feel comfortable doing such a similar concept. I’m also guessing in the wake of the success of O.J., ESPN was eager to flex that longform muscle again which they did here.

My only real gripe is the film could have used some more graphics to help provide some more thorough context as the subject matter begins to bleed together after a while. The film goes through the players over the years on both teams, various stats of key players, key games and series leading up to their Finals showdowns, and the breakdown of what transpired in each series, but not much of this info is summarized or presented graphically. You almost need to take notes or use a second screen to truly absorb all the complexities of the rivalry through the years. You may find yourself going “Wait, what year is this Finals again? Who is on this team opposed to last year’s team?”

Ultimately, I think it boils down to your interest level in the topic. If you’re on the fence, perhaps cutting out Part 1 and reading the cliff notes about the Lakers and Celtics in the 60s on Wikipedia would cut the film down about an hour.

I’m actually really interested to see how the ratings perform for ESPN on this one. Can they find success going longform on team specific topics? If so, I imagine this will open up the door to a myriad of multi-part extended films on classic teams and rivalries and I think while these films might have a more narrow appeal, I’m all for more ambitious storytelling and increased output of these types of projects and with that in mind, despite some of my skepticism, I’m hoping the film finds acclaim and ratings success.