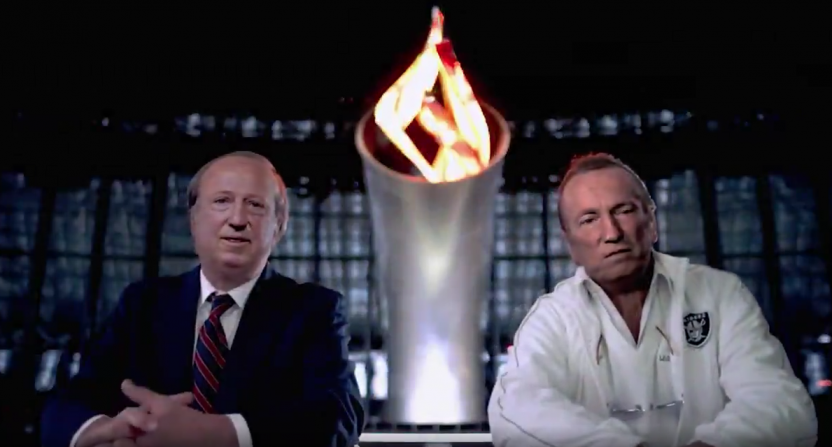 Length: One hour and seventeen minutes without commercials (airing in a 90 minute window with commercials)

Installment: #113 by ESPN’s count (#112 by my count, counting the O.J. doc as one installment, although ESPN initially counted it as five different 30 for 30s, but now seems to list it separately, not as part of the series. Additionally, one finished project, Down In The Valley, has been suspended from airing.)

Most Similar To: The Price of Gold, The Two Bills

Review: If you’re looking at the lackluster grade assigned to what, at first glance, seems like a layup for a good 30 for 30 (a really good topic/story choice and a storyteller who is consistently good to great) and wondering what happened here, I’ll get straight to what I think most people will be talking about Thursday night.

Al Davis vs. The NFL has virtually no new interviews in the film. Instead, director Ken Rodgers (who has four previous 30 for 30 installments to his name) opted to take a chance and utilize “deep fake” technology to bring Al Davis and Pete Rozelle back to life. The easiest way to explain it is that Davis and Rozelle are basically hologram ghosts brought back to life, similar to the Hall of Presidents exhibit at Disney, and used to fill in the blanks within the story. Before getting into this a bit further, two quick things for context:

“In a film about two men who are both deceased, Ken Rodgers and the team at NFL Films wanted to take an alternative and fresh approach to telling this story, as opposed to the common execution of primarily older, male “talking heads” who were familiar with the two men and their adversarial relationship. After months of brainstorming, and with COVID-19 making it more challenging to shoot on site, the team came up with the idea to bring Al and Pete back to life, and tell their story using a first person narrative approach. This would be done through implementing innovative technology most commonly known as “Deep Fake”. Hiring an artist who works in this new medium, Ken Rodgers was able to transform two actors into what look and sound like the real Pete Rozelle and Al Davis. Through these “digital disguises”, their spirits enter the new Raiders stadium in Las Vegas to recount their decade-long feud against one another. For authenticity purposes, both Al and Pete’s families signed off on the re-creation, and made sure that the lines written for the actors were based in things the two men actually said in their lives.”

I asked ESPN if viewers would get notes or director commentary to provide similar context to viewers, and it looks like that will not be the case. Knowing that this was born out of pandemic limitations and that the families signed off on the commentary both deep fakes provided, I was a bit more comfortable with the decision, but it still wasn’t enough to win me over to the concept.

Ultimately, I came away with the strong belief that this project would have been better if it had been shelved until in-person interviews could be conducted, or if those interviews were done via Zoom, as we’ve seen over the last year with interview-heavy shows like Real Sports and Backstory. That said, I understand that if you’re Ken Rodgers, it’s possible that you wanted to try something new, different, and exciting. Given his resume, there isn’t really a reason to not roll the dice and trust that it turns out okay.

I’m hoping viewers with the more polished final versions of Davis and Rozelle will be more accepting of the different storytelling format. After putting aside the presentation of the deep fakes, one other thing I couldn’t ignore was the lack of new interviews, which left the film with some pretty notable underserved and under-explained points throughout. If Rozelle, Davis, or others close to the men didn’t say something on the record in a past interview that could be used to give insight and context into their contentious relationship, the story basically relied on the filmmakers crafting some lines that had to essentially be limited in scope and were written to not be too controversial or insightful.

Nothing said by the deep fakes registered as all that interesting, and that’s more or less by design. With new interviews, the film could have gotten more provocative and interesting quotes from those who knew the men. The lines themselves were just a bit too watered down, high level, and simple, which isn’t what you want to see when you’re selling the film as one maverick and one institutionalist clashing in high-stakes battles over the span of decades.

So many significant points in the film left me with questions, which couldn’t be answered through either decades-old news footage and interviews or the deep fakes. The AFL merger and some of the Raiders’ relocations (or near relocations) get very quick high level drive-by explanations, which isn’t the standard you want for critical parts of the story. I know I have a substantially more curious mind than most, but this just didn’t scratch the itch of wanting a deep understanding of Davis and his clashes with Rozelle and the NFL. At certain junctions, it felt more like a Wikipedia article opposed to a longform, well-researched magazine feature.

On the positive side, the film does have a nice sturdy base of a compelling story to tell. I think even the more knowledgeable and older NFL fans would be hard pressed to remember all of the various clashes Davis had with the NFL. This might have been a solid two-hour installment with new interviews beefing up the project, but at 90 minutes with commercials, the film moves along quite nimbly and doesn’t drag much along the way.

The best parts of the film would certainly be the heavy dose of classic NFL Films footage, which includes the Autumn Wind, a lot of great old newscast footage, and some memorable game footage. There are enough old Davis and Rozelle interviews as well, which certainly help illuminate their colorful history as adversaries. There are a few stretches in the film that just drip with compelling interviews and old footage that allows you to really sink into just big of an agent of chaos/trouble Davis was for so many years.

Another plus includes some nifty usage of illustrations and graphics to help provide some additional helpful context about the Raiders’ motivation for moving. On the sports media front, we get some modern day Brent Musburger and some older footage of young John Madden and Bryant Gumbel.

While the deep fake usage certainly dinged the film in my eyes, I don’t think I can totally discount the concept going forward. If coupled with new interviews, it wouldn’t have been as awkward. I also think the concept would have worked a lot better if both men wrote comprehensive and telling autobiographies. If that was the case, you would have a such a deeper reservoir of quotes and commentary to pull from, rather than trying to hit a very small bullseye by inventing lines for them that didn’t wade into controversy.

Ultimately though, I think this has to be viewed under the lens of the new normal. Documentary production leans heavily on travel and in-person interviews. In this case, it was going to rely heavily on older, at risk people who lived through the Davis and Rozelle years. The pandemic opened up the opportunity to experiment a little, which media companies and content creators always have an itch to do. This effort fell a little flat, but it enabled the project to get completed. Like so many things these days, it is what it is.