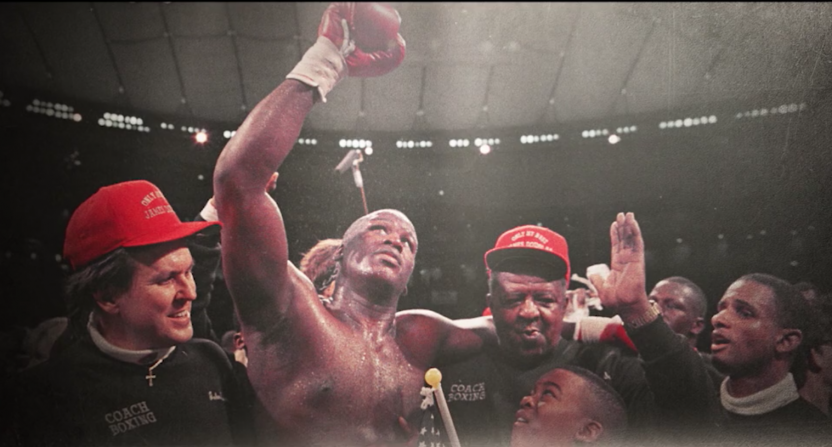 Installment: #99 by ESPN’s count (#100 by mine, counting the O.J. doc as one installment, although ESPN initially counted it as five different 30 for 30s, but now seems to list it separately, not as part of the series. Additionally, one finished project, Down In The Valley, has been suspended from airing.)

Most Similar To: No Más; Chasing Tyson

Review: It’s been a bit of a sluggish year for 30 for 30, but we close the year on a high note with a new installment this week, and one coming in January. Hopefully 2018 will end up being floor in terms of production output, as we were told 15 installments are currently in the works.

42 to 1 is a solid installment. It’s an hour. I’d have to look back, but I’d say most of the hour installments have graded in the middle third of 30 for 30s and that’s the case here. For those of us who are old enough to remember this historic sporting event, it wasn’t much of a memorable spectacle.

If you were lucky enough to have cable, you heard about it right away on SportsCenter, or perhaps you were lucky enough to have HBO and watched the upset. I don’t think I know anyone who actually saw the fight live on TV, nor do I recall any buildup for the fight. It was an ocean away and with very little anticipation. Buster Douglas was supposed to be the goat tethered to a post in Jurassic Park and Mike Tyson was going to toss his anonymous carcass onto the windshield of a painted Ford Explorer. It had become so common that there just wasn’t much intrigue as the the shock value was beginning to go stale.

And yet the world awoke the next day alarmed that they had missed a rare miracle within the sports world. Mike Tyson was now mortal and Buster Douglas would forever be the guy who ended Tyson’s tenure as a mythical destroyer of men.

Tyson vs. Douglas: the biggest upset in boxing history.

But what happened behind the scenes has largely escaped the general public, and most can’t tell you much about Douglas, because he was gone from the limelight not long after the fight. Through 42-1, we get a thorough and insightful retelling of one of the most unexpected outcomes in sports history.

While the fight itself and the footage of a lot of the previous fights is pretty remarkable (especially of Tyson), the rest of the story that is mined and retold is at times a bit flat. Douglas is a local legend here in Columbus, but as we get to know him, his family, his upbringing, and what makes him tick, you don’t come away with anything that jumps off the page. More or less, there isn’t a crazy twist or personality trait that would make this a bankable Hollywood movie. Douglas is just a very mild-mannered and humble dude.

Douglas did suffer a tragedy before the fight, but you really get a sense of stoic normalcy with him. He’s not particularly engaging or deep, and while his insights and retellings are helpful in adding color, he never does enough where he’s a compelling memorable personality. We remember him because of what he did and to who, but not for who he is. That’s not a knock on him by any means, but he just doesn’t grab us as a protagonist that we all fall for and see ourselves in. He had a bumpy road along the way, but nothing that far outside of a normal pro athlete’s journey. What makes him different is that he shocked the world. and my oh my, how awesome it was.

The fight footage in this documentary really steals the show. There are plenty of interviews to add context and insights from various boxing personalities and people involved with Douglas. Tyson’s perspective is told through someone in his corner, but the film certainly could’ve used some additional participation from his side. I get it though. If there was a 30 for 30 about my negative-yard punt on the JV football team, I wouldn’t want to participate. You know what…fuck it, I would. I forced and recovered a fumble two plays later, and after we went three-and-out once again, I had my best punt of the year (because the returner lined up like comically close after that snafu) and I booted that ball way over his head. This actually should be a 30 for 30 now that I think about it. Anyway…

I think that given the significance of this fight, a more robust retelling of this historical outcome was always low-hanging fruit, and we got a pretty damn good effort here that really leaned into fight footage and insightful interviews to make up for the modest amount of narrative that led up to the fight.

I don’t think viewers will be disappointed, but I do think they’ll actually want more either in the way of a longer documentary, more insights from Tyson’s POV, or hell the whole fight in its entirety (which will air after). But alas, not every 30 for 30 installment can deliver at the level that OJ and my JV punting story do, so with that in mind, this is a good one hour that is a fun watch and makes you nostalgic for when boxing was not only relevant, but often unexpectedly riveting.