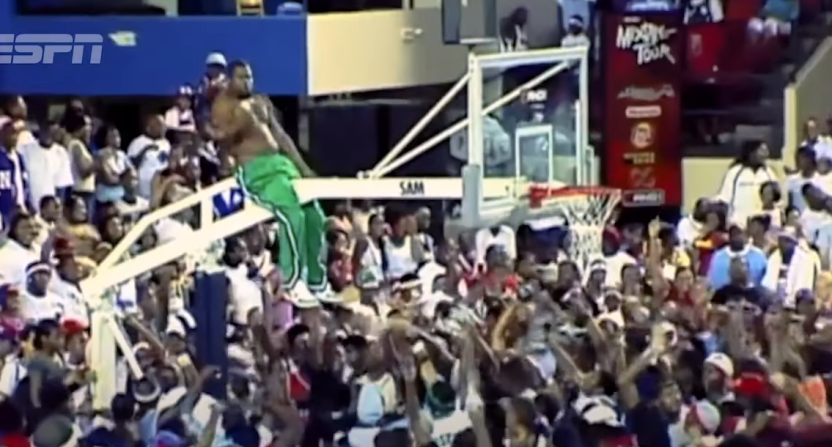 Length: 48 minutes without commercials (airing in a one-hour window with commercials)

Most Similar To: Sole Man, Mike and The Mad Dog

Review: I think viewers are largely going to fall into three buckets when they watch The Greatest Mixtape Ever.

1. Those who enjoyed it, but potentially might have preferred it to be more narrowly focused in more of a 30 for 30 shorts installment, or an E:60 or Cover Story type of segment.

2. Those who enjoy it but would have preferred a longer installment that spent more time on the history of streetball, And1, and a deeper dive into the lives of the many AND1 players.

3. Those who really don’t have much familiarity with streetball, mixtapes, hip hop, and AND1 and potentially could flip away when greeted with a more niche 30 for 30 outside of traditional sports and more known athletes.

I found myself in bucket number two as someone who sold basketball sneakers in the early 2000s and religiously watched ESPN’s And1 streetball tour show.

For me, I thoroughly enjoyed The Greatest Mixtape Ever and wanted more of it given that it clocks in as one of the shortest 30 for 30 installments. The shorter runtime felt like a compromise made to serve all three of the defined viewers I listed above.

This was potentially aided by some key people perhaps not wanting to participate in the project. One of the film’s co-creator seemed to also point to the length of the film being a lit more limiting in telling the full story as well.

What I originally wrote up was to cover how the And1 clothing line and clothing brands in general at that time in the ’90s led up to the And1 mixtape, what the people involved with the money had done at the time – why players involved weren’t properly paid, for example – and then show the influence and aftermath of And1. I’d say this documentary is kind of like a condensed version of all that.

Co-directed by Chris Robinson and Set Free Richardson, who is credited as the creator of the first streetball mixed tape, The Greatest Mixtape Ever keeps a steady pace retracing the cultural significance of streetball, the origins of AND1, streetball synergy with hip hop, and the creative process that led to the original AND1 mixed tape as well as the subsequent mixtapes, AND1 Tour, and streetball’s surge in popularity.

Cramming all of that background into that last sentence is more or less the same challenge Robinson and Richardson had in trying to cover this much ground in a 48-minute installment. To accomplish this, there is a quick pace and no notable detours. Unfortunately, some areas feel a bit under-explored or missing in context.

I’m often quibbling with the length of 30 for 30s as they have to be compacted or lengthened to meet certain broadcast windows. In this instance, I think the intended audience would have certainly been game for another 30 minutes, which would have allowed a bit more freedom to explore certain topics and personalities.

If I had to guess, I think it’s likely that the current owners of AND1 (the brand has changed owners several times since the early 2000s) were hesitant to participate in the film. And while Robinson and a few other former AND1 employees participated, you didn’t get much insight into how the mixtapes changed the trajectory of the And1 business other than it was good but fizzled out years later.

The film really stays focused on AND1’s cultural impact but mostly stays away from specifics about the business, including how much players were paid and how the mixtapes and the subsequent tour impacted the lives of those they made famous.

A blend of information and nostalgia for those who remember that era well, the largely well-executed doc answers a lot of questions and showcases a lot of familiar names in both basketball and hip hop, but comes up a bit short of being fully comprehensive (which again, I think probably boils down to runtime decisions and participation issues).

All that said, I think most are going to come into this installment with a pretty low baseline of knowledge for the topic. Moving fast, with a lot of famous faces, great (but low resolution) basketball footage, and a lively soundtrack, viewers are going to learn a lot while nostalgically remembering AND1 and streetball’s peak within pop culture. Director Set Free Robinson gives a great first-hand account, retracing the origins of the original mixtape, a concept he invented and had never really existed before in basketball.

I thought the film’s usage of animated retellings was a very shrewd move since so much of this story wasn’t documented at the time. Various animation recreations brought some visual diversity to a film that doesn’t get the benefit of having thousands of hours of archival newscasts nor a deep archive of professionally shot and produced game footage.

For those familiar with the ESPN AND1 show, we do get to see Hot Sauce and a lot of the familiar faces but, no, The Professor is not featured. Unfortunately, The Chapelle Show skits bringing the mixtape concept to other sports like baseball and bowling also g0t left out.

Similar to the recent 30 for 30 installment The Tuck Rule, it’s funny what you remember and don’t remember 20 years after something happened. When I really think of the AND1 mixtapes, one of the things I can never shake is the on-court announcer’s voice hyping the crowd. Hearing about him and the concept of having such a crowd-friendly announcer, as well as a deconstruction of the show’s success and how ESPN furthered the cultural trend, unfortunately, felt a bit underserved.

All that said, this is one of those hard to predict and hard to forget cultural trends that exploded out of nowhere. Often these are some of the best stories but are the most problematic in wrangling everything needed. Films like these are often shooting at a very small bullseye when they focus exclusively on a very niche sport or topic, especially one lacking well-known stars. While I’m not sure they hit that bullseye dead on, they’re pretty damn close. ESPN and everyone involved should feel good that they shepherded such a tricky project to the finish line. It hits pretty smooth overall for those looking to scratch that nostalgic itch.

Interested in more 30 for 30 reviews? Check out our review archives here.