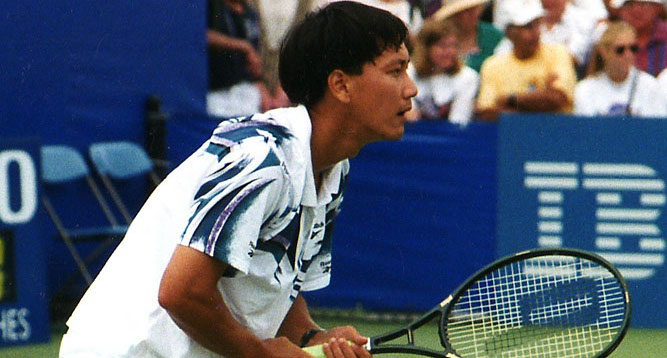 With a lot of interest in ESPN’s coverage of the US Open, thanks in part to Serena Williams‘ run to date, it’s a good time for them to announce an upcoming 30 for 30 documentary on a tennis star. That would be Michael Chang, who famously won the 1989 French Open at just 17. Jay Caspian Kang, known for his work at The New Yorker, The New York Times, Grantland, HBO’s Vice News Tonight, and more, will direct. He tweeted about this Thursday:

For the past year, I’ve been directing a documentary for @30for30 with the team from Words and Pictures and the great producer Laura Dodd. It’s about Michael Chang, immigration, the 1989 French Open and Tiananmen Square. More details soon! https://t.co/ru6xIWF46n

Here’s more on this from ESPN’s release:

ESPN Films today announced that production has completed on a 30 for 30 documentary about former tennis player Michael Chang, with New Yorker and The New York Times writer and Emmy nominated correspondent, Jay Caspian Kang, on board for his directorial debut. “American Son” will tell the story of Chang’s improbable rise as a young American tennis star, and his family’s immigrant journey which shaped his destiny. The story is centered around his winning the 1989 French Open at age 17, including his unforgettable upset of top ranked Ivan Lendl – a match that unfolded in the shadow of the Tiananmen Square massacre in China.

The documentary will be executive produced by ESPN Films in association with Words + Pictures. Phil de Picciotto, Peter Nelson, Tom Ross, and Kelly Wolf are also serving as Executive Producers. Among the interview subjects featured in the story are Chang, Lendl, Roger Federer, Jeremy Lin, and Brad Gilbert.

It’s interesting to see former HBO Sports president Nelson included in that list of executive producers. And Words + Pictures is the company founded last year by former ESPN executive vice president of content Connor Schell in association with Chernin Entertainment. Schell played a large role in the 30 for 30 series over the years. So there are some heavy hitters involved with this.

It’s also interesting to see Kang make his directorial debut with a 30 for 30, as that’s pretty rare. But he’s certainly a prominent writer with a strong voice, and a background in sports (including at Grantland), TV, and print. And Chang (seen above in 1994 at the Thriftway Championships Cincinnati) has quite a story, from becoming the youngest man to win a major in singles tennis (a record he still holds) to winning 33 other singles titles, but not another major (he made the final in both the Australian Open and the US Open in 1996, but that’s as close as he got). The Tiananmen Square connection is also notable, and Chang (who was born in New Jersey to Taiwanese parents) has spoken about that impact on his match with Lendl before, including to Jerry Crowe of The Los Angeles Times in 2009:

A lot of people forget that Tiananmen Square was going on. The crackdown that happened was on the middle Sunday at the French Open, so if I was not practicing or playing a match, I was glued to the television, watching the events unfold…I often tell people I think it was God’s purpose for me to be able to win the French Open the way it was won because I was able to put a smile on Chinese people’s faces around the world at a time when there wasn’t much to smile about.

And as Deadline’s Dade Hayes notes, too, it’s unusual to see a 30 for 30 on tennis. ESPN has done just two previous ones there out of 119 full-length 30 for 30 installments, with 2010’s Unmatched on Chris Evert and Martina Navratilova and 2013’s This is What They Want, on Jimmy Connors. So it’s notable to see them exploring tennis more. And this will be a project to keep an eye out for.